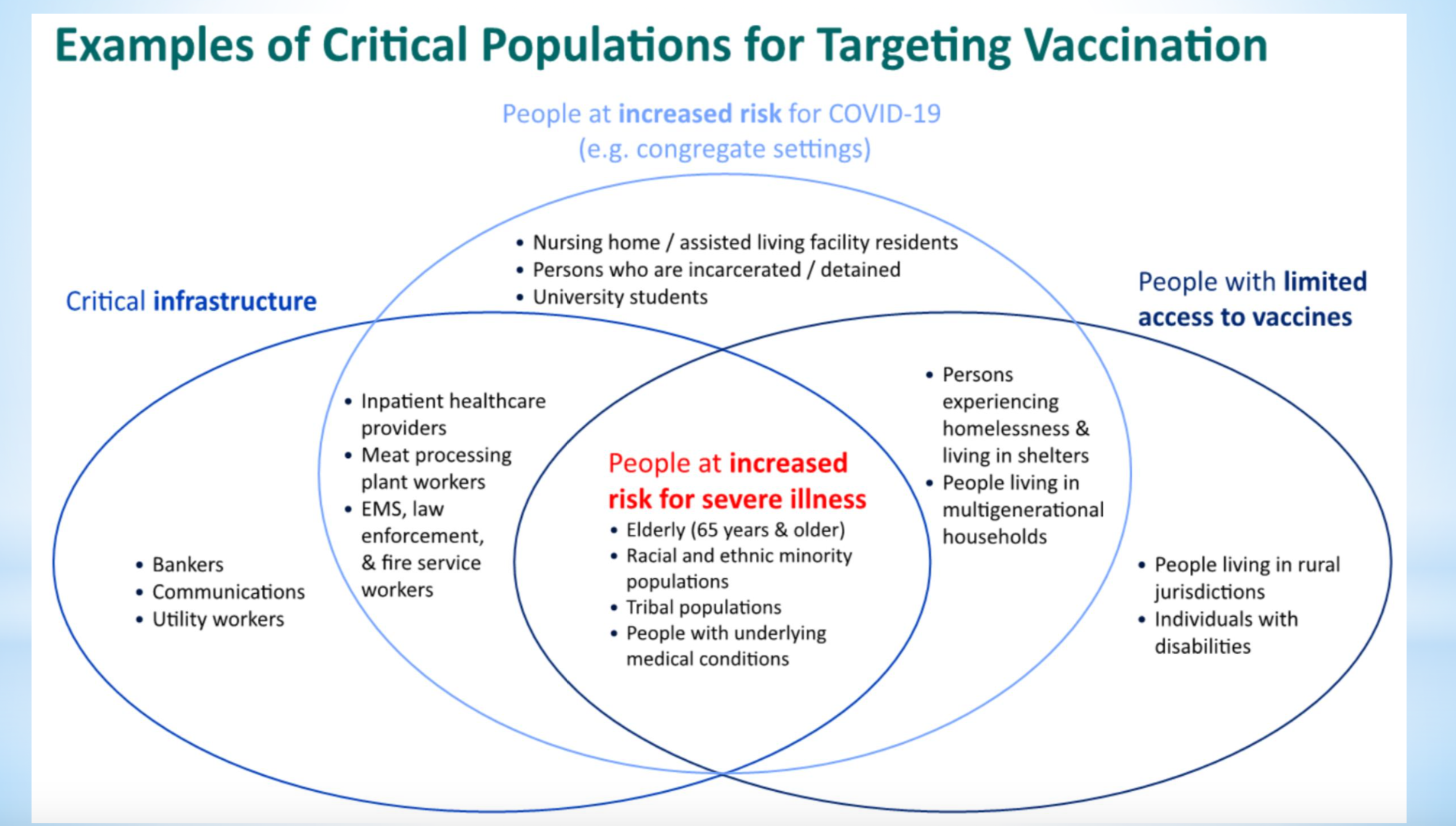 One of the slides from the state Department of Public Health’s presentation at the first meeting of the state’s vaccine task force.

Elderly residents, people of color, tribal communities and residents with underlying medical conditions are among the “critical populations” in Connecticut that could receive priority for a COVID-19 vaccine when the state gets its first shipments, health officials said Thursday.

Leaders of the state Department of Public Health presented a broad overview of their coronavirus vaccine distribution plan – due to the Centers for Disease Control and Prevention on Friday – to a new panel tasked with advising Gov. Ned Lamont on who should get the first batches of immunizations and how to conduct community outreach.

People in congregate settings, such as prisons, universities and nursing homes, were also included in the state’s list of “critical populations,” along with residents who are homeless or who live in multigenerational housing. Residents with limited access to vaccines, such as those in rural areas and people with disabilities, may receive priority, as well as the state’s “essential workers:” first responders, health care providers, utility employees, educators and bankers, among others.

The overview did not specify which groups would be considered highest priority. The vaccine advisory panel, which met on Thursday for the first time, will have input on that decision.

Health officials did not say when Connecticut would receive its first shipment of COVID-19 vaccines or which companies would be supplying them.

“Limited doses may be available by early November 2020, but supply will increase substantially in 2021,” they wrote in the presentation. “Two doses, separated by ≥21 or 28 days, will be needed for immunity for most vaccines.”

To identify sites that will administer the vaccine, the state sent emails to licensed providers across Connecticut asking them to complete a survey designed to gauge interest and inquire about storage capacity. Site administrators were also required to disclose how many people they would be able to vaccinate daily.

The state also contacted hospitals to determine their capacity and ability to vaccinate their own staff.

“We are doing our best to till the soil and make sure that we have awareness among potential vaccine providers, and generally have laid the tracks for this mass vaccination program,” said Deidre Gifford, a co-chair of the vaccine panel and the state’s acting public health commissioner. “But we also appreciate and want to make sure the public knows that all of this is subject to the recommendations that come from this group, what we get from ACIP – which is the Advisory Committee on Immunization Practices at the CDC – and other federal bodies.”

In the coming months, the advisory group will help develop methods of community outreach, suggest locations for temporary clinics and identify resources that are needed, among other things. Locations where people may be able to get vaccinated include hospitals, physicians’ offices, pharmacies, mobile clinics and federally qualified health centers. Leaders of the public health department did not offer specific sites on Thursday.

State health officials will submit a preliminary draft plan to the CDC on Friday.