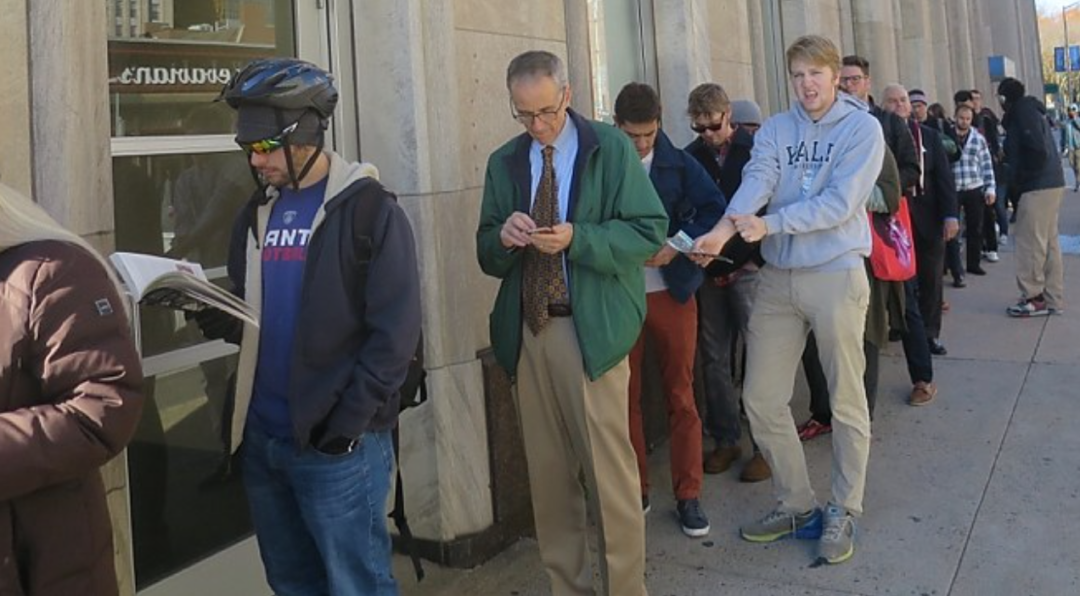 Voters in line to cast ballots at New Haven’s Hall of Records during the 2016 election.

Stationing officers near polling locations has been part of the Stonington Police Department’s Election Day routine for as long as Chief Darren Stewart can remember. Police regularly stand outside the town’s five polling stations and direct traffic, manage lines and help people cross the street so they can cast their ballots.

“Most of the time, we’re not inside the polling places unless we’re called in,” said Stewart, a 37-year veteran of the force who is also the president of the Connecticut Police Chiefs Association.

This election has the potential to be different, however. Recent stand-offs between Trump and Biden supporters in other parts of the country, and the potential for problems at the polls, have some advocates on edge.

Kelly Moore, policy counsel for the ACLU of Connecticut, warned that President Donald Trump’s repeated, false claims that the election’s outcome is rigged, and state Republican Party leadership calling on volunteers to “monitor that everything’s fair,” could wind up deterring people from casting a ballot.

“Our major concern is private actors will show up at the polls in an intimidating way, and that will lead to people not voting,” said Moore.

Intimidation could lead to election officials or voters calling the police, Moore said, potentially further dissuading voters from having their voices heard. Police unions across the state, still burning over the Democratic majority legislature’s recent approval of a police accountability bill, overwhelmingly endorsed Republicans in this election cycle.

“The police presence could be seen as a political presence by people who are there to vote,” Moore said, explaining that seeing police at the polls  could especially alienate people of color. “Voters of color are likely to recognize that the entire purpose of that bill was to value Black lives in Connecticut, and police opposition to that is racialized.”

The combination of police unions’ involvement in partisan politics and the looming threat of voter intimidation by private actors, Moore said, “make this a unique election year.”

Moore said the ACLU is not so much concerned about police presence like that in Stonington, where officers direct traffic and handle public safety from a reasonable distance outside the polling place; instead, they’re worried about officers being preemptively called upon to deal with a disruption that hasn’t yet materialized, and stationing them within 75 feet of a polling place’s entrance.

State statute allows registrars of voters to request police protection at a polling place if they anticipate trouble. But it’s not common for officials to request the help, said Gabe Rosenberg, communications director for Secretary of The State Denise Merrill.

“For the most part, Connecticut elections don’t have the kind of disturbance or disorder that that’s necessary,” Rosenberg said. “We haven’t gotten any intelligence to suggest we should be worried about this.”

For its part, the Division of Criminal Justice is advising local law enforcement on current state laws related to criminal activity on Election Day matters.

“The Division continues to cooperate with other state agencies, including the Secretary of The State’s Office, to assure that should an issue arise, local law enforcement officials understand their role in enforcing these laws,” a spokesperson for the DCJ said in a statement. “If arrests are made, the Division of Criminal Justice will prosecute these matter in Superior Court.”

The Department of Emergency Services and Public Protection has been planning for Election Day for months, said Brian Foley, the agency’s spokesperson.

“Our main priority is people’s public safety, and feeling safe, while they exercise one of the most core rights of our country,” he said.

Foley said all five regional coordinators from the Division of Emergency Management, as well as state police troop commanders, will be monitoring conditions across the state and, along with the Secretary of The State’s Office, will relay any developments or issues to the Connecticut Intelligence Center. The center will partner with federal agencies to monitor what’s happening across the country throughout the day.

State police troop commanders are in contact with the Secretary of The State’s Office and town moderators so they can respond quickly to any developments, Foley said. State troopers will monitor the polls throughout the day, but they will not be standing by voting booths in uniform.

“The last thing we want people to do is feel intimidated by uniforms at the polls,” Foley said. “We want them to feel safe. We’re going to approach it cautiously and keep our ear to the ground as to what’s going on around the state and around the nation.”

Other police departments are in contact with state officials and will be on standby should there be trouble at the polls.

“We’re going to be ready to respond if there are issues,” said Fairfield Police Department Capt. Robert Kalamaris. “We are not going to have any officers posted outside polling stations.”

Directing traffic could be part of that tightrope act. Suffield Police have put officers on traffic posts during past national elections, said Chief Richard Brown, to make sure things go smoothly.

“We just help people get in and get out,” he said.