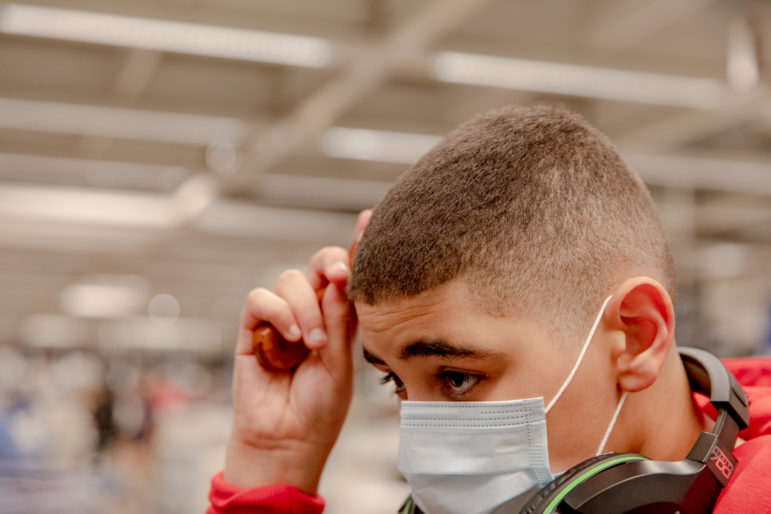 Devin Geyer, 13, combs his hair to make sure that his short hair looks nice.

Citing “very little evidence of harm and a wide-ranging medical consensus that” mask-wearing is safe, a Hartford judge on Monday denied a request for an emergency injunction against the state’s requirement that children wear masks in schools.

Superior Court Judge Thomas Moukawsher said in his ruling “no emergency exists” in CT Freedom Alliance’s argument that the state Department of Education’s requirement for students to wear masks while in school poses an immediate threat to every child’s health and safety in Connecticut.

“Nothing the Connecticut government has done about school mask wearing has been shown as irrational and dangerous rather than, like all human action, in some ways imperfect,” he wrote. “Indeed, it aligns with ordinary expectations.”

CT Freedom Alliance, with four Connecticut families as co-plaintiffs, filed the lawsuit in August, arguing that requiring children to wear masks in school is not only a health risk but that the Department of Education violated state law by improperly implementing the regulation. The plaintiffs also argued that requiring masks violates the state constitution by impinging on the right to an education.

State Attorney General William Tong said the allegations in the lawsuit are “based on pseudoscience” and aimed to instill fear, adding that the court’s ruling on Monday was justified.

“Masks save lives. This partisan lawsuit was little more than a cynical stunt that recklessly sought to endanger the lives and health of thousands of Connecticut children and educators,” Tong said. “My office will continue to vigorously defend the authority of the Governor to protect the public from these baseless claims.”

Representatives from CT Freedom Alliance did not respond to requests for comment.

In his ruling, Moukawsher said the witnesses that CT Alliance brought forward — a California psychiatrist and biostatistician epidemiologist from New York — did not provide enough support for the plaintiff’s claim that wearing masks is harmful.

“A year ago you could have stopped anyone on the street, and they would have told you that masks, gloves, hand washing and distance are all ways to reduce the spread of disease,” Moukawsher wrote. “There is no emergency danger to children from wearing masks in schools … there is very little evidence of harm at all and a wide ranging medical consensus that it is safe.”