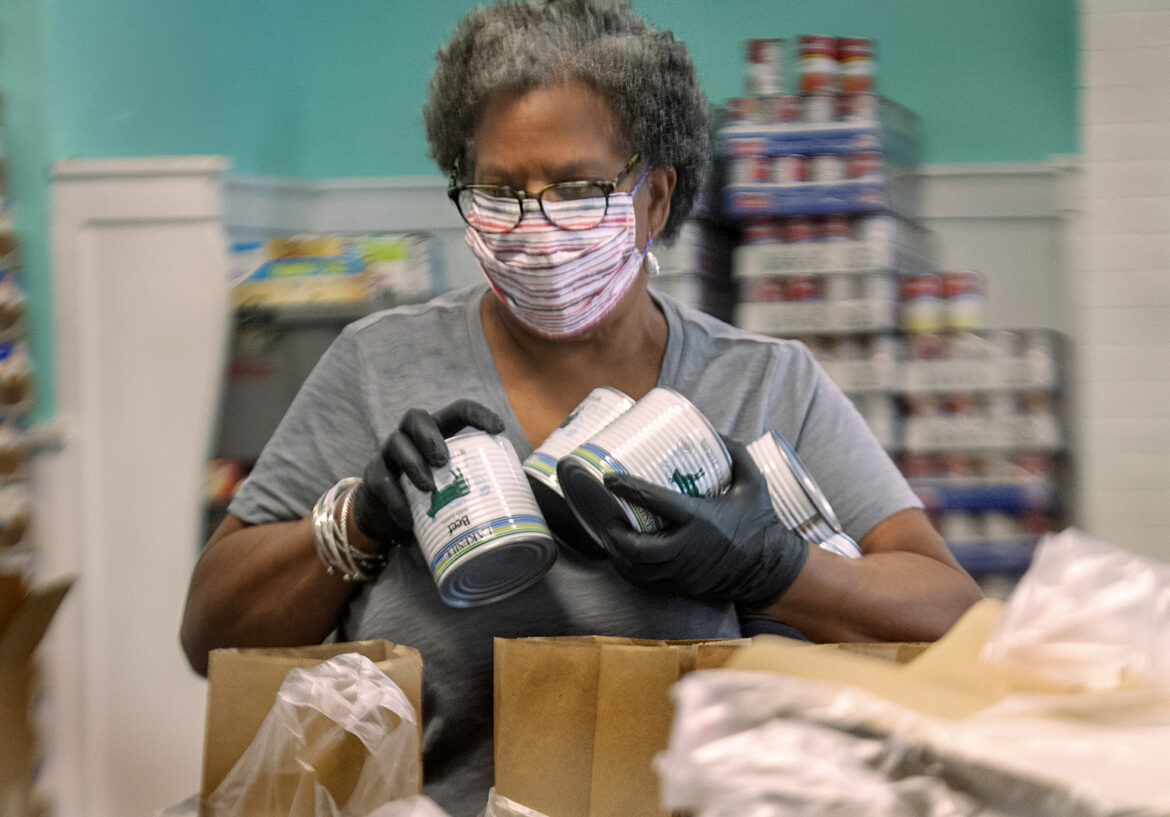 The nation’s food bank system, created to provide emergency food assistance, fills a chronic need. Still, it may be perpetuating obesity among those facing hunger, concludes a new report by the University of Connecticut’s Rudd Center for Food Policy and Obesity.

The jump in demand for food caused by the pandemic’s economic fallout amplifies the challenges facing those who serve the hungry.

Directors of food banks hesitate to request that donors confine their tax-deductible contributions to healthy foods for fear of alienating them, Kristen Cooksey Stowers said in the report published in PLOS ONE. Stowers, assistant professor in the University of Connecticut’s Allied Health Services Department, concludes there are many opportunities to promote health equity among food pantry clients, particularly those from historically marginalized groups. She recommends people at every level engage in conversations about how to improve the food bank system.

Stowers interviewed 10 people concerned with hunger issues at the highest level, including the directors of food banks, national advocates fighting hunger and a food bank board member. Conducting interviews in 2017, she asked open-ended questions designed to explore the heightened obesity risk among food-insecure food pantry clients. 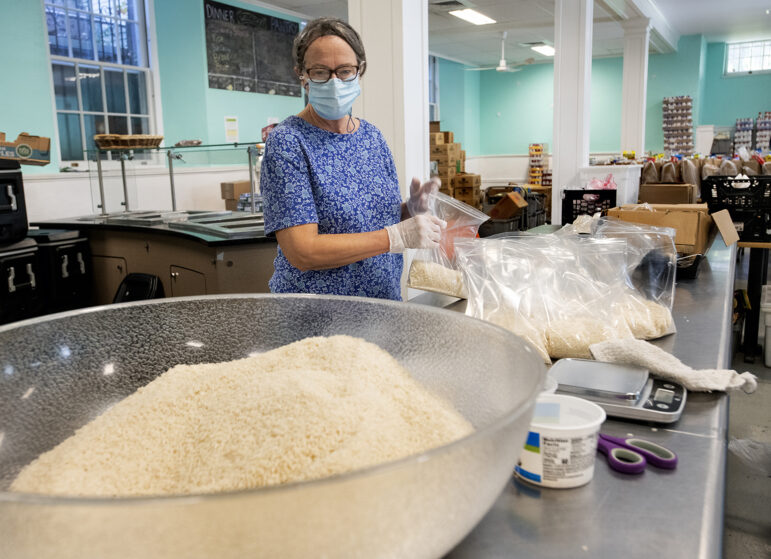 When he began his job four years ago, he told a long-time retailer who had been donating sheet cakes each week along with bread that the pantry could no longer take the sheet cakes. (The pantry had been forced to take the leftover cakes if it wanted the bread; then pantry staff had to either give clients the cakes or pay for the dumpster fees.) The retailer ended the relationship, but Werlin got a local bakery to donate its unsold bread. Food pantry managers should talk to their local retailers about the harm sweets are doing to clients with obesity, diabetes and heart disease, Werlin said.

Obesity rates in Connecticut have been rising for decades. In 1990, the obesity rate for adults was 10%, reports Connecticut Data Haven in its 2019 Community Health Well-Being Survey. In 2019, 27% of all adults, almost 12% of children and 14% of toddlers (ages 2-4) had obesity, according to Data Haven. And people of color are affected by obesity at higher rates. More than 30% of Hispanic adults and more than 35% of Black adults are obese, compared with 25-29% of white residents, the Centers for Disease Control and Prevention (CDC) reports.

Food donations from grocery stores and food wholesalers have plummeted since the pandemic began in March, so food banking systems that serve as suppliers and distributors to food pantries have been purchasing more food. Despite a 20% or more increase in the demand for food, buyers for the Connecticut Food Bank have been using monetary donations to purchase healthy proteins such as tuna and to achieve some food consistency, said Paul Shipman, senior director for marketing, communication and government relations for the food bank.

At the DESK food pantry, Werlin said regular clients who used to visit in the second half of the month after their Social Security or federal Supplemental Nutrition Assistance Program (SNAP) benefits ran out now come every week. In Connecticut, an average of nearly 13%  of households was food insecure, which means they had limited or uncertain access to sufficient nutritious food between 2017 and 2019, according to U.S. Department of Agriculture (USDA) figures.

A new USDA program to buy surplus food from farmers and give it to food banks has been a mixed bag, say food pantry leaders. Over the summer, the Farmers to Family Food Box program bought produce from a Connecticut farmer that was picked the day before being delivered. Each week brought a rotating variety of fresh produce that clients loved, said Michelle Lapine McCabe, director of the Center for Food Equity and Economic Development, based in Bridgeport. 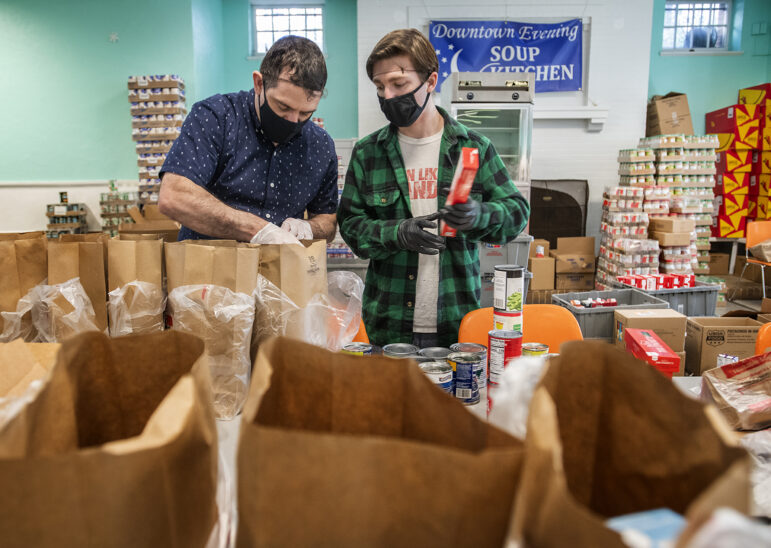 Since the beginning of October, the food box program contracted with a Delaware farmer and mandated that the boxes include cooked meat and dairy products, she said. They now receive apples, onions, cabbage, cucumbers, hot dogs, “scrapple” made from pork scraps, and dairy products ranging from milk and cheese to half-and-half and sour cream.

“This is chronic. You have a growing number of Connecticut residents who have to get food from food pantries,” McCabe said. “If every week you’re giving them sour cream and hot dogs, what do you think is going to happen? We’re supposed to be helping people, but in essence, we’re hurting them.”

Even before the pandemic, food pantries had become a permanent part of survival for most of their clients, pantry leaders say. Many clients are working, retired, unemployed or disabled, and the pantry food supplements their food budget.

“Local food banks and pantries should be advocating for a commitment to giving the best, healthiest food to people who are going to be relying on the food system for a long time. We have to be conscious of how we’re hurting their diets. This is a marathon,” McCabe said. “What the Rudd Center report shows us is, without a commitment [to rejecting unhealthy food] at the highest level, how can we change the perspective?”

This story was first published Nov. 2, 2020, by the Connecticut Health Investigative Team.