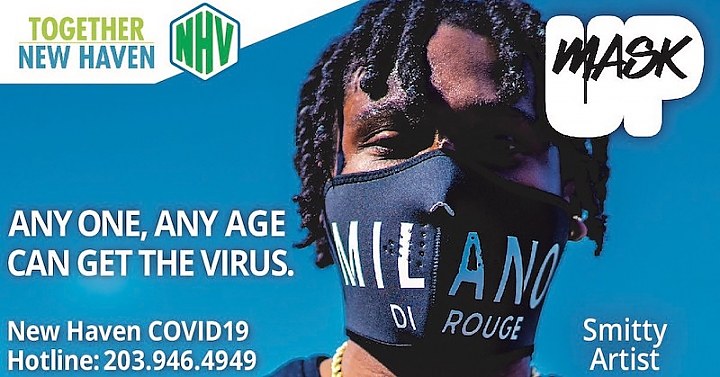 Local musician Smitty featured in the city’s Mask Up campaign, among growing efforts to stem the spread of the coronavirus.

New Haven City Hall has pulled the plug on a planned “mask census” to track how many people are wearing COVID protective face coverings — and then figure out how to get more to comply.

Less than an hour after the Independent first published a story about the new census undertaking, city spokesperson Gage Frank told the Independent that that program is now “on hold.”

“We’ve seen some concern from residents,” he said about the reason for the sudden pause of the program, which was still in the planning stages and had not yet been rolled out in practice.

“This was only about targeting messaging” around encouraging proper mask use, he said. It was designed as a way to measure mask use through direct observation as opposed to phone calls and surveys.

For now, at least, the plan has been dropped.

City Hall is planning a “mask census” to understand how many people citywide are wearing COVID -protective face coverings—and then figure out how to get more to comply.

The program isn’t up and running quite yet, Mayor Justin Elicker and city Deputy Chief Administrative Officer Rebecca Bombero told the Independent Friday.

Bombero, who is the coordinator of the nascent effort, said that recent outreach to alders and community management teams resulted in only one volunteer signing up to help. Now she and her team are regrouping to figure out how best to proceed. She said that the program will likely rely on city staffers rather than volunteers to do the data-collection work.

A parallel effort to recruit volunteers for a new senior phone bank program has been more successful. (See more on that below.)

If and when the mask census program rolls out, here’s the plan:

A volunteer or city staffer will be sent out to a heavily-trafficked part of the city where, per state order, masks are required to be worn — such as at a bus stop, a train station, or near the entryway to a store.

Bombero said that the mask census-taker will be stationed at a safe distance from other people, likely in a vehicle or in a chair.

The census-taker will then enter those numbers into a tracking sheet to be aggregated and analyzed by City Hall.

Both Elicker and Bombero compared the effort to the pedestrian point-in-time counts that organizations like the Town Green Special Services District conduct to track changes in how many people walk around downtown, and to use that as a gauge for economic health and potential business impact.

“We have anecdotes,” Elicker said about mask compliance citywide. “We do not have data. The city can respond to things better with data.”

Bombero agreed, noting that such a mask-census effort will provide “just another metric that we can follow in how best to respond to the pandemic.”

Bombero and Elicker said it could inform what type of educational campaigns the city might want to put together to encourage proper mask wearing. It might also result in targeted mask distribution events.

Bombero said the program was inspired in part by recommendations from the federal Centers for Disease Control and Prevention (CDC) on collecting observational data on mask wearing. For months, public health experts have promoted mask wearing as one of the most effective tools for deterring the spread of the novel coronavirus. The state requires residents to wear masks whenever out in public and unable to maintain at least a six-foot distance from others.

“The goal is to get a sense of whether people in general are wearing masks and wearing masks properly,” Elicker said. “Do we need to change our messaging? Do we need to do more outreach? Are things going OK? There’s no intention to surveil businesses or get anyone in trouble. It’s just to get a sense over time of how people’s mask-wearing behavior is changing to guide our decisions” around education and outreach.

This spring, the city launched a “Mask Up” campaign, with billboards stationed around the city showing prominent locals (like Smitty, above) sporting masks.

Mayor Elicker: This is not about surveillance.

Elicker and Bombero stressed that the program is very much not about individual tracking.

It will not result in citations or fines to those not wearing masks.

While the city is fining businesses up to $100 if employees are caught not wearing masks on the job, this mask census program is not about enforcement but rather about data collection and education, they said.

One city staffer sent out an email to local clergy earlier this week encouraging them to solicit volunteers for a so-called “mask surveillance” program. The city has subsequently scrapped the word “surveillance” from any online references to the program.

Elicker said that “the use of the word ‘surveillance’ by a staff member is not an accurate representation of anything we’re trying to do. We’re trying to guide our decision making” with data. Not keep tabs on individuals.

Bethel AME Rev. Steven Cousin told the Independent that seeing that word “surveillance” in reference to this mask compliance program in a city email initially raised quite a few concerns. Which neighbors will the city be surveilling? Who will be targeted? If the numbers are not what the city wants, will there be any recourse, citations, fines?

“We understand about Covid and how the numbers are increasing,” he said. “But especially in the African American community, we’re always going to look at it through a different lens, about how this might be another way to keep surveillance on us and to try to bring in unwanted attention.”

In a follow up call after this reporter had spoken with Elicker and Bombero about how this program would actually work—about its generalized data collection, and not individual tracking—Cousin said the mask census effort sounds good in theory. But in practice, he said, is observation, data collection, and subsequent analysis only going to delay outreach and education work that can be done more immediately by City Hall.

“If it’s all about mask safety and people wearing masks properly,” he said, “why not go to these areas and distribute face masks while they’re there? That’s how you education people, through that one-on-one personal intervention.”

Cousin cited Dixwell contractor Rodney Williams’s citywide mask-giveaways as a model for what he would like to see from the city. “Going out to vulnerable neighborhoods and giving out free masks,” he said. “I would love to see the city do something like that,” where they know people gather—that is, at bus stops or train stations or near popular stores—and do distribution at those sites and talk to people who don’t have masks.

“Given the history of this country, it’s always going to be met with kind of skepticism, particularly in the African American community,” he said about mass data collection. “It can sound harmless.” But that doesn’t mean that everyone will greet it that way.

While only one person signed up to volunteer for the still-in-the-works mask census program, Bombero said, the city has already signed up 13 volunteers to help with its new senior phone bank program.That pandemic-era outreach effort has volunteers make regular phone calls to seniors across the city to let them know about current high risks of transmission of the novel coronavirus, about the importance of staying safe and at home when possible, and to connect them with resources like a nurses, Clifford Beers clinic’s “warm line”, and free meal distribution programs.

Bombero said the city has phone numbers for roughly 7,500 local seniors, and that the volunteers have made around 1,000 phone calls so far over the past two weeks.

Elicker said the city set up a similar program during the first surge of the pandemic this spring. “The goal is to check in on people’s mental health,” he said. “To see if they have any basic needs for food and things like that. To make sure people know that we’re in the red, and to notify people about testing sites.”

Volunteers take notes on every call they make, Bombero said, and then she and her team go through those notes to see what kind of follow up they need to provide based on those conversations.

This story was first published Nov. 20, 2020, by the New Haven Independent.