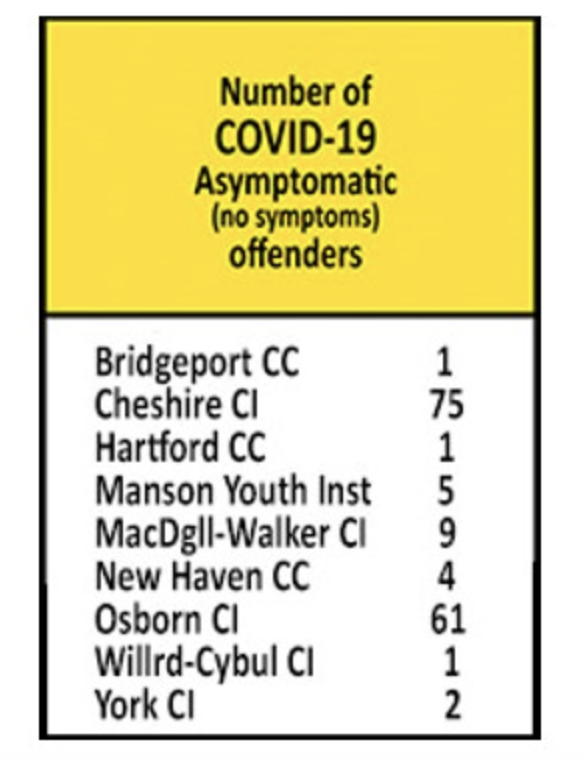 Asymptomatic cases of COVID-19 reported by the Department of Correction as of Nov. 27, 2020.

On Nov. 23, the Department of Correction issued a rosy press release informing the public about the results of its third round of mass testing in the state’s correctional facilities: Of the 8,647 inmates tested between Oct. 6 and Nov. 13, only 80 had tested positive for the virus.

Several days later, the COVID-19 ticker on its website painted a different picture.

The department is also reporting 78 cases of incarcerated people who have the virus and are showing symptoms. The website does not break down how many each those cases are in each of the state’s 14 prisons and jails.

More than 120 corrections staff are currently recovering from COVID-19.

The discrepancy between the mass testing press release and the numbers reported on the website is due to a recently initiated protocol that institutes rapid testing triggered by certain scenarios, officials said.

“For example, if a few inmates in a particular housing unit report symptoms and test positive for COVID-19, we would consider that a ‘hot spot’ and utilize the rapid test to see if we need to remove other inmates from that area that are positive,” Karen Martucci, the agency’s director of external affairs, said in an email. “It will likely produce more positive cases, but the goal is to minimize the spread.”

Martucci said the new policy allows the department to quickly identify cases that would have been missed between rounds of mass testing.

“Increasing the frequency of testing is critical, and we are in the planning phases of moving to bi-weekly testing for the population and weekly testing for direct-care employees,” Martucci said. “Naturally, we anticipate seeing an uptick simply bases on the increase we are witnessing in the community.”