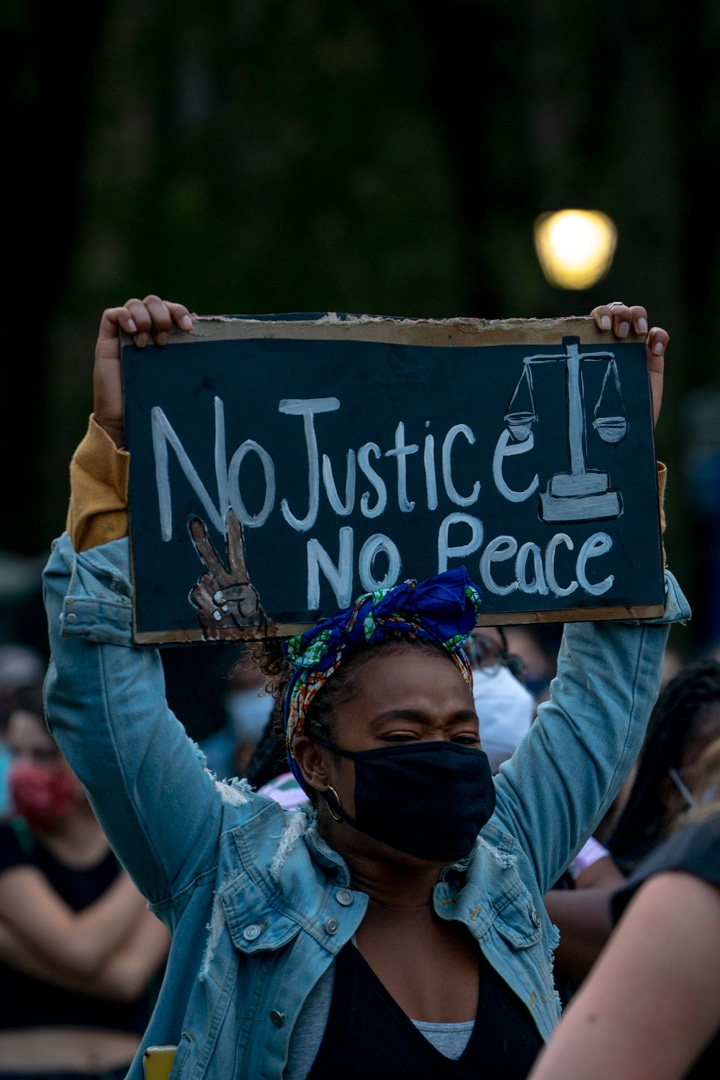 A protestor holds a sign during the protest on Thursday, Sept. 24 at New Haven Green.

As Sen. Gary Winfield watched the insurrection in Washington, D.C. on the Wednesday night news, he thought about the six years he spent in the U.S. Navy, risking his life for the promise of a better future for everyone — regardless of race, religion or ethnicity — he may never experience.

“But every time you see something like this, you ask yourself, ‘Is that actually true, or am I crazy? And if it’s true, is it going to be true in the lifetime of my children, or my children’s children?’” said Winfield, D-New Haven, said in a phone interview Wednesday night. “It burns me to my soul to watch this.”

On Wednesday, hundreds of Donald Trump supporters stormed the U.S. Capitol as lawmakers certified the Electoral College votes confirming that Joe Biden won the 2020 presidential election. Lawmakers’ offices were occupied and looted, windows were broken, and people paraded through the Capitol carrying Confederate flags, a symbol of white supremacy and racism. Four people died in the melee, and at least two explosive devices were found in D.C. by law enforcement officials. There was an armed standoff. Rioters were hit with flash bangs and tear gas to disperse the crowd. 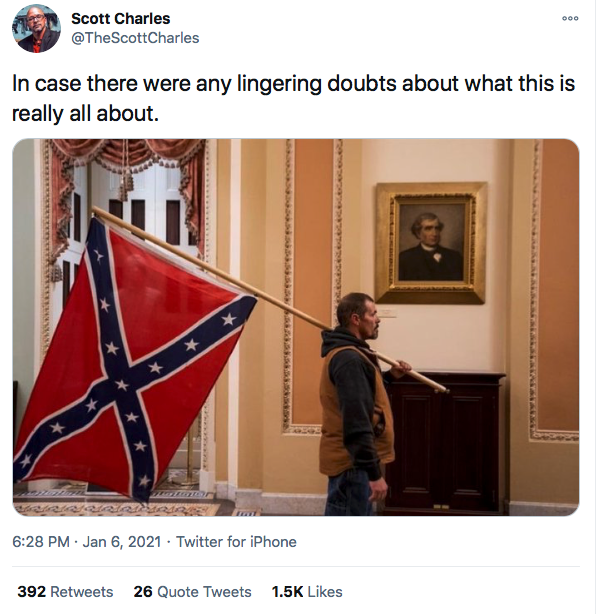 A tweet from a gun violence educator in Philadelphia was shared by hundreds of people Wednesday.

As the chaos unfolding in Washington transfixed and horrified the nation, the events became immediately symbolic not just of the racism the Trump era has enabled and emboldened, but also a forcible reminder about white privilege. The mostly white, right-wing rioters who breached the Capitol were not treated with the same level of police force that has historically been inflicted on those who take to the streets to demand protection for Black lives — especially when those making the demands are Black.

Protestors from across the state and country took to the streets to demand police accountability last summer in the wake of George Floyd’s death, and were met with varying degrees of force. A peaceful Black Lives Matter protest outside the White House on June 1, for example, was dispersed by more than 5,000 National Guard troops and Washington police in riot gear, who used teargas, batons and horses to clear the area so the president could walk across the square for a photo op. Closer to home, police responded to peaceful BLM protests in Waterbury with tanks and riot gear, arresting 28 people.

“They came essentially armed to the teeth, ready to throw down with peaceful protestors who were exercising their First Amendment rights and peacefully protesting,” said David McGuire, executive director of the ACLU of Connecticut. “And today you see a racist mob show up at the Capitol to try to obstruct a transition of democratic power, and police have a very different approach, and that’s a stark contrast based on who’s protesting and what they’re showing up for.”

Winfield, who as co-chair of the Judiciary Committee led the charge to pass a police accountability bill in a special session over the summer, contrasted the reasons for each of the protests. The calls for racial justice and equity over the summer were rooted in a yearning to be full citizens who can be safe in their Black bodies, he said, or, for white people, to stand in support of people of color.

“This isn’t about that,” Winfield said. “This is about, ‘We lost an election that was administered the way it should have been administered; we just didn’t have the numbers and, like children, we are throwing a temper tantrum.’ This isn’t about patriotism, this is about fealty to an individual. So they should put those flags down, because they’re basically operating as Confederates.”

The images of Trump supporters carrying Confederate flags through the U.S. Capitol were particularly chilling.

“It’s crazy to see that in the halls, but to be truthfully honest, this is life in this country,” said Daryl McGraw, chair of Connecticut’s Police Transparency and Accountability Task Force.

Still, he said, “to see that in the Capitol really is a slap in the face.”

A tweet from NYT columnist Charles Blow Wednesday echoed the sentiments of many Black Americans, in Connecticut and around the nation.

McGraw recalled how, during Black Lives Matter protests in D.C. last year, demonstrators were peaceful, “yet we were called animals.” During Wednesday’s attack on the Capitol, however, police appeared relatively restrained, McGraw said.

“There would be a lot more deaths today if it were Black and brown people doing that,” McGraw said. “We don’t have the privilege or the luxury to think that that’s acceptable.”

McGraw called the riot “the epitome of white supremacy. This sense of privilege and power, this is, ‘I’m going to do what I’m going to do, regardless of the ramifications.'”

Scot X. Esdaile, president of the NAACP CT — whose national organization called for the president’s immediate impeachment on Wednesday — compared the unrest in the nation’s capital to the violence during the Reconstruction era, when the Ku Klux Klan and the White League assassinated and intimidated Black and white Republican officials throughout the South.

Over and over throughout American history, Esdaile said, when whites perceive that racial and ethnic minorities are gaining power over them, they riot and inflict violence, especially on Black people.

“This is nothing new,” he said. “Many people have thought the country has advanced, but we’re seeing the same ‘ole, same ‘ole.”