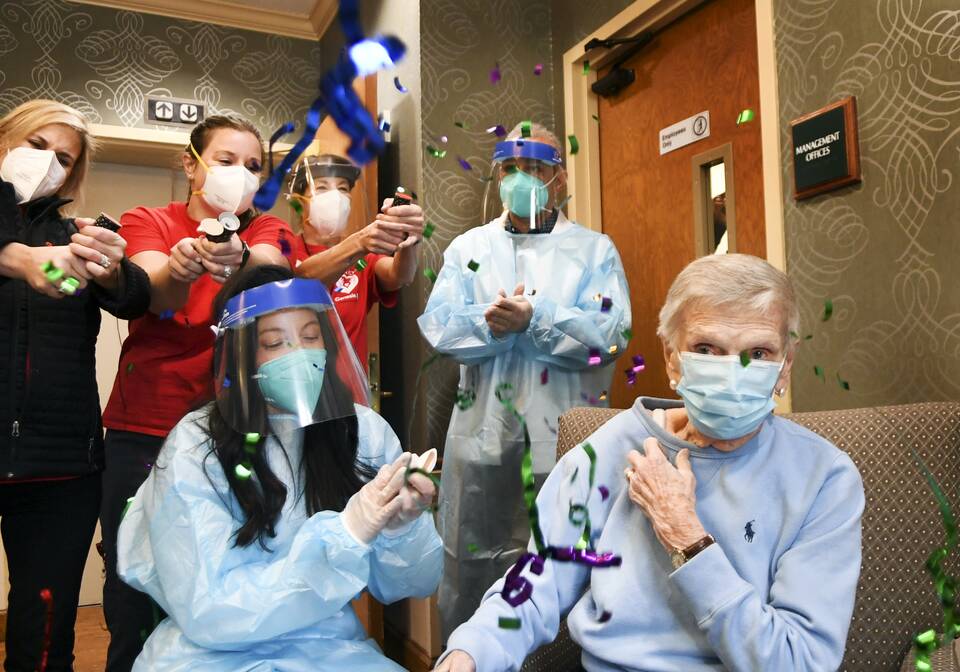 Jeanne Peters, 95, a resident at The Reservoir nursing home in West Hartford, received a COVID-19 vaccine on Dec. 18. The Reservoir was among the first nursing homes in Connecticut to begin vaccinating residents against coronavirus.

For the first time in several weeks, the number of COVID-19 deaths and infections in long-term care facilities in Connecticut decreased sharply — raising the possibility that systematic vaccinations are curbing the virus’s deadly path through the state’s most vulnerable residents.

“We don’t know where we are going to go from here — it could really go either way,” said Dr. Vivian Leung of the state Department of Public Health. “We are not relaxing now that the first doses of the vaccine have been given.”

Leung, who oversees the DPH’s Healthcare-Associated Infections and Antimicrobial Resistance Program, told a legislative committee Thursday that despite the decrease, the state is still testing residents and staff at the same frequency and is doubling-down on infection control, especially with community spread still high — particularly in Eastern Connecticut.

“There needs to be continued vigilance with infection control and rapid response, and we are continuing to do that at the department and in the facilities themselves until the community rates start to go down,” Leung said.

There have been several major outbreaks in long-term care facilities in Eastern Connecticut recently. The Matulaitis nursing home in Putnam and Davis Place nursing home in Killingly have had 89 and 120 infections respectively over the past few weeks.

There also were 18 deaths at the Greentree Manor Nursing & Rehabilitation Center in Waterford, which has become the recovery home in Eastern Connecticut where other homes send their COVID-positive residents.

Matthew Barrett, the CEO of the Connecticut Association of Health Care Facilities, said that while the numbers look better, nursing homes and assisted living facilities “can’t let their guard down.”

“The vaccine is the clear pathway to the other side of the pandemic, but congregate settings like nursing homes and assisted living communities will continue to struggle until our state tamps down community spread,” Barrett said.

CVS and Walgreens vaccinators have started the second round of vaccines in nursing homes this week and are hoping to get through a second round at all 213 by the end of January.

The participation in the vaccine program by residents has been very high — averaging over 90 percent — and providers have been waiting for the numbers of cases to decline because of that.

The state saw a steady increase in infections and deaths in long-term care facilities until the most recent report.

Overall, there have been 3,813 COVID-19 deaths in the state’s nursing homes since March or about 61% of all deaths in the state. The death rate has been significantly lower in long-term care facilities during the second wave of coronavirus infections over the past few months than it was in the spring.