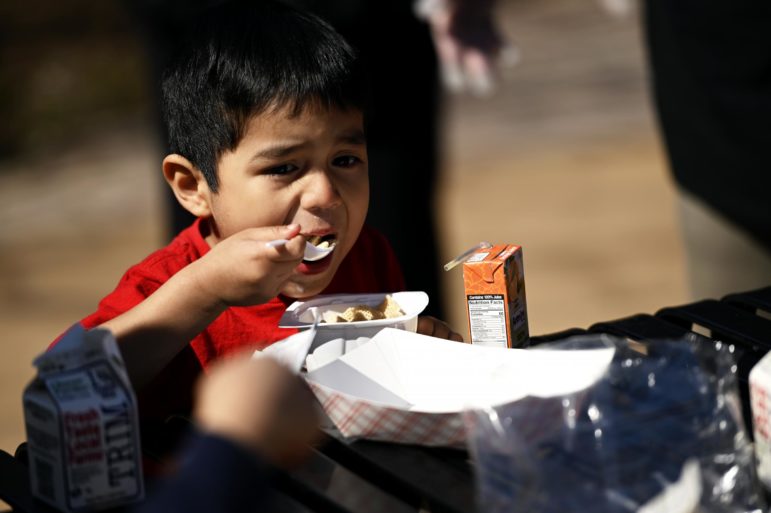 A file photo of a young Hartford student eating a meal provided by the school district after schoolhouses were shuttered in March of 2020 because of COVID-19. The district will now hold in-person learning beginning Monday.

Hartford’s school superintendent is recalling teachers and students to the classroom beginning Monday. But two local teachers’ unions, who say they found out about the return date the same day as parents and students, think it’s too early.

Carol Gale, the president of the Hartford Federation of Teachers, had thought the return would happen after April break. That’s when most employees will be fully vaccinated.

“I offer that there would have been great buy-in on the part of staff,” Gale said, “if the staff could feel comfortable that they were fully vaccinated — two weeks past the second shot – before more students were returning into already crowded classrooms by COVID standards.”

District superintendent Leslie Torres-Rodriguez said the plan was never to go back in April and that now is the right time to return students to the classroom.

“Yeah, remote learning is working for some students,” Torres-Rodriguez said. “However, for our most marginalized students, it is not – as indicated by the high chronic absenteeism rate and hearing directly from parents about the level of isolation that our students are experiencing.”

She said employees getting second doses, the CDC’s new “3-feet” social distancing guidance in schools, and infection metrics now being lower than they were in the fall all support a return.

Teachers may see it differently. Gale said she’s heard from members that it’ll be hard to keep students apart from one another, particularly when they aren’t wearing masks during lunch time.

Staffing is another concern. Shellye Davis, the president of the Hartford Federation of Para Educators said that because some employees with disabilities can’t return yet, other paras will have to take on multiple students.

“What does that even look like?” Davis asked. “This isn’t really thought out.”

Despite calls to change the return date, Torres-Rodriguez is going ahead with the schoolhouse re-openings.

“The school leaders have been planning for a return in early spring since February,” Torres-Rodriguez said. “It’s something that we continued to think through given that we know that we’ve wanted to bring more students back in. Half days have been allotted for staff to have time to do additional planning.”

“You have not only the lesson-planning and the mental preparation, but the physical preparation,” Gale said. “We have virtual teachers whose classrooms have been cleared of furniture because they didn’t need it.”

Torres-Rodriguez isn’t too concerned about the schools being packed in a pandemic. She expects only around 25 percent of Hartford students to come back on March 29, according to a survey of family intentions. By that time, less than a third of all employees would be fully vaccinated.

This story was first published March 26, 2021, by Connecticut Public Radio.