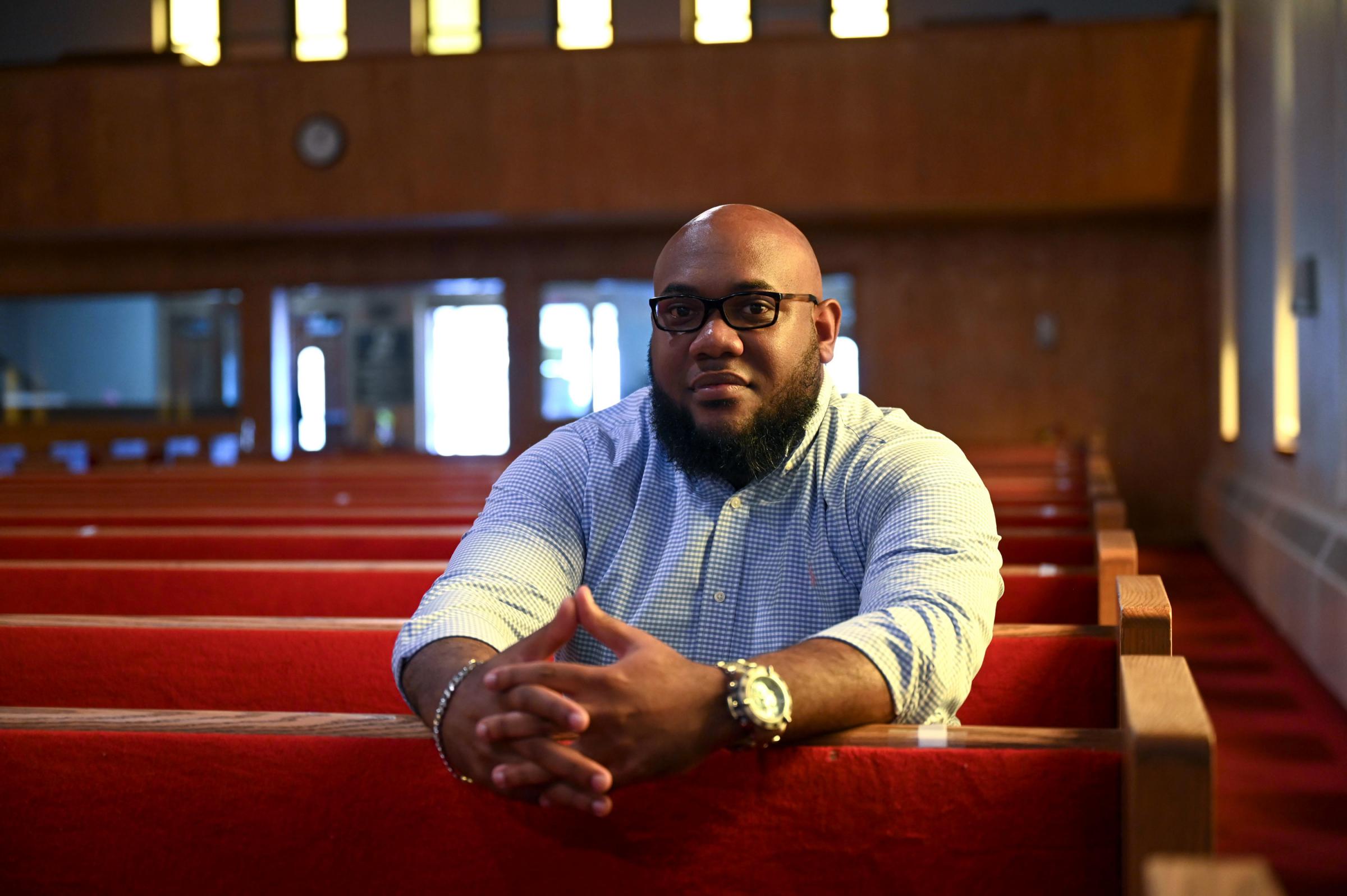 Pastor Antwaun Richardson sits for a portrait inside Zion Baptist Church in Waterbury. He worked with members of his church to set up a vaccine clinic after seeing hesitation in his congregation.

Pastor Antwaun Richardson says he regularly preaches to his church members that God is not visible, but evidence that God exists is. Richardson sees evidence of God in the coronavirus vaccine.

Sitting in the red velvet pew of Zion Baptist Church in Waterbury, Richardson said, “This vaccination is a step of faith, much like the step of faith we have to take in God.” As he spoke, workers at a vaccine clinic distributed 50 doses of the Johnson & Johnson shot to members of the Waterbury community in the church basement below.

Richardson said he has seen vaccine hesitation among his congregation. But he’s been asking those members to have the faith “that although we can’t see what it does in our body, we have to trust that everything is going to be all right.”

Connecticut ranks fifth in the nation in the percentage of the population with vaccinations initiated. Still, clear racial disparities in the rollout remain.

Data released recently show that around 25.5% of white residents in the state have been fully vaccinated, while just 12.5% of Black residents and 9.5% of Hispanic residents have gotten their full dose. The data come with caveats: The state says they are incomplete and that race was not properly recorded for tens of thousands of recipients. Members of Zion Baptist Church and other Waterbury residents wait in line to receive the COVID-19 vaccine at a clinic in the church basement on March 31, 2021. RYAN CARON KING / CONNECTICUT PUBLIC RADIO

In early March, Connecticut began directing doses of the vaccine to specific ZIP codes deemed the most socially vulnerable by the Centers for Disease Control and Prevention. A proportional number of doses are brought to pop-up vaccine clinics in communities that score high on the social vulnerability index, or SVI.

Zion Baptist Church lies in one of those communities.

But the vaccine clinic might not have taken place without local initiative. Earlier this year, Richardson had a vision for a vaccine clinic at the church. And Belinda Weaver shared that view. She’s a member at Zion Baptist and sits on Waterbury’s Board of Aldermen. She worked with the Waterbury Health District to make the clinic happen.

Weaver said that in “the Black community, there’s a lot of hesitancy about coming out to get the vaccination.” She saw that hesitancy in her own family. One relative believed the vaccine would kill them and mistrusted Johnson & Johnson.

But Weaver said, “If they see that it’s in the community, maybe they will make that step to come and get it.”

Richardson and Weaver promoted the clinic on social media and spoke to church members. They ran buses to pick people up. And people came.

Katrina Scott welcomed the opportunity to get her vaccine right in her neighborhood.

She said she’d been putting it off. But when her mom was diagnosed with cancer, that woke her up. Scott said she understands vaccine hesitancy in the Black community, where a history of racism in medicine has put African Americans at risk.

“That’s why we have to do our own research to find out exactly what’s going on and then decide from there,” Scott said while standing in line outside Zion Baptist.

Scott said she also heard the call to have faith.

“This is a time when we need to stop and go to God first,” Scott said, “and wait for his answers, ’cause he knows what’s best for us.”

Anthony Tyson said he’s seen plenty of racism in health care, but he didn’t hesitate to get his vaccine.