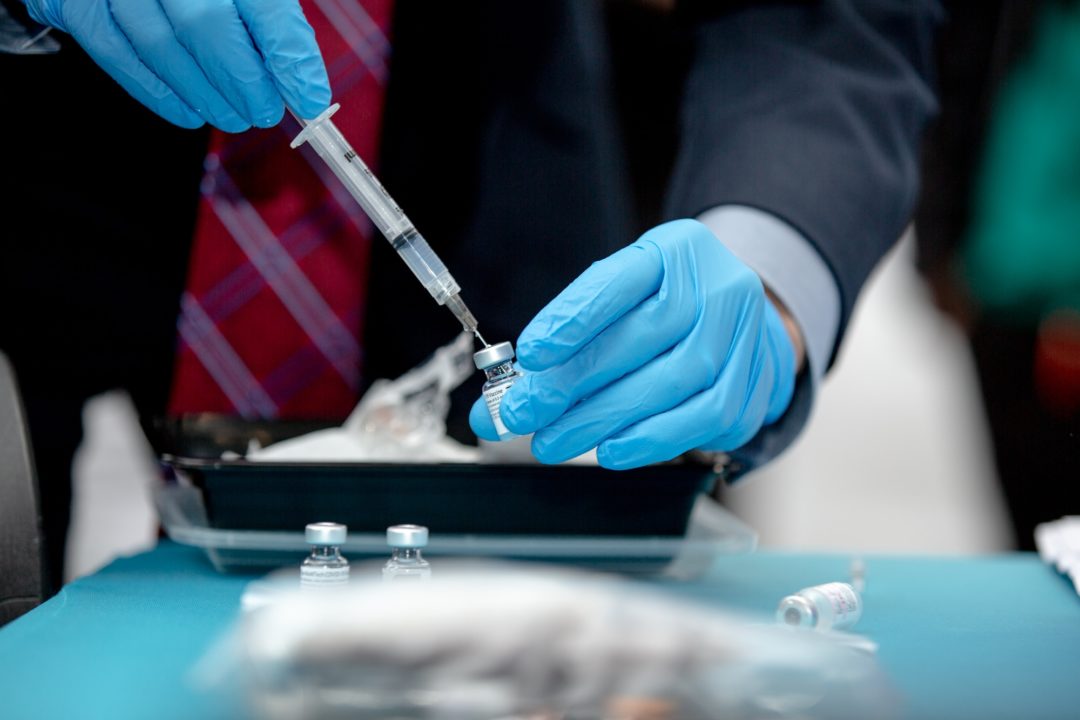 Eric Arlia, director of systems pharmacy at Hartford HealthCare, demonstrates preparation for the distribution of the COVID-19 vaccine.

The U.S. Food and Drug Administration has granted emergency approval for use of the Pfizer-BioNTech coronavirus vaccine in 12- to 15-year-olds, a move that will help allay concerns about transmission in schools, summer camps and other youth programs.

Until this week, the Pfizer vaccine had been authorized for people 16 and older. The Moderna and Johnson & Johnson COVID-19 shots are only available to those 18 and older, though both companies are studying the efficacy of their vaccines in children.

Across Connecticut, providers have begun requesting more doses of the Pfizer vaccine in preparation for eligibility to open to the new age group, said Josh Geballe, the state’s chief operating officer. There are about 177,000 children ages 12 to 15 in the state.

“We’ll have a lot of expanded access this weekend coming up, both at our mass vaccination sites but also at pharmacies, and now a number of local health departments are going to do clinics,” he said. “So there will be a lot of options available for parents and their children who want to get vaccinated in the next week.”

The federal Advisory Committee on Immunization Practices will meet Wednesday to discuss whether to issue recommendations on the use of the Pfizer vaccine in young teens. If the panel signs off, immunizations could begin in Connecticut and elsewhere as early as Thursday.

Here’s what you need to know.

What did the clinical trial show for 12- to 15-year-olds?

Pfizer enrolled 2,260 children ages 12 to 15 in its Phase 3 trial. Some received two doses of the vaccine three weeks apart, and others received two doses of a placebo in that same time interval. The company reported no cases of COVID-19 in the vaccinated group, while 18 participants in the placebo group contracted the virus. Side effects were consistent with those observed in the 16-to-25 age group, the company said, including pain at the injection site, fatigue, headache and joint pain, among other symptoms.

Where can I get my child vaccinated?

Any site in Connecticut that currently offers the Pfizer vaccine to residents as young as 16 will soon open up eligibility to those ages 12 to 15. That includes some of the state’s mass vaccination sites run by Community Health Center Inc. Hartford Hospital, Connecticut Children’s Medical Center and certain Walgreens pharmacy locations are among the other providers offering vaccines to the younger age group.

A full list of Connecticut vaccination sites can be found here. Any site that lists “16+” as its age range will soon offer the shots to young teens, state officials said. The website will be updated to reflect the new age group later this week.

Some providers, such as the Yale New Haven Health system and UConn Health, have already begun scheduling appointments for children 12 to 15 for later this week. Others are expected to follow as early as Thursday. Dozens of providers are also offering walk-up vaccinations.

Is a parent or guardian required?

Yes, anyone younger than 18 must be accompanied by a parent or guardian.

Should I go through my child’s school district?

Parents can contact their child’s school to see if any school-based clinics will be scheduled, but state officials say many school leaders are directing families to take their kids to a vaccination site.

“What we’ve learned through this is that a lot of the schools don’t really want to have the vaccines done on site because it’s a little bit disruptive,” said Max Reiss, a spokesman for Gov. Ned Lamont. “And so they’ve been encouraging parents to do it on their own time.”

The Pfizer COVID vaccine now has full approval. Will that mean more mandates in CT?

“This should further reassure those who decided to wait,” Deidre Gifford, Connecticut’s acting commissioner of public health, said.