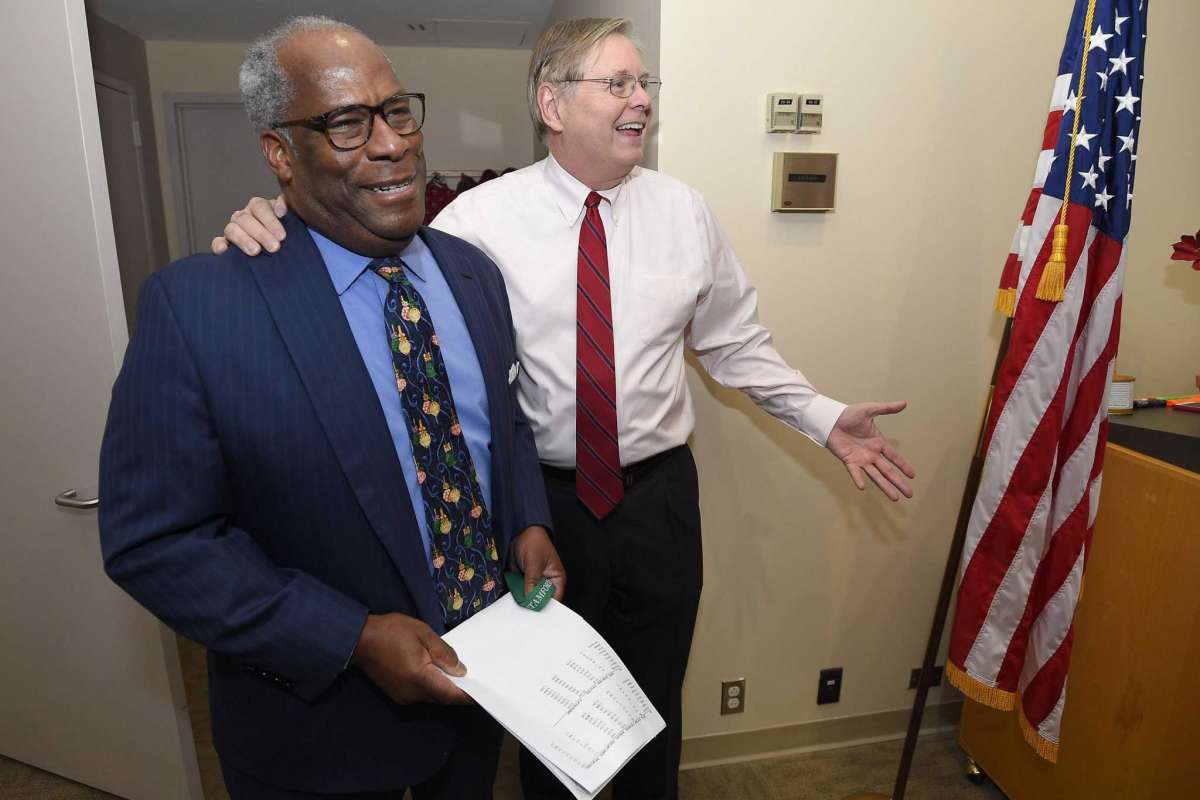 Dudley Williams, Mill River Collaborative director, left, is surprised by Stamford Mayor David Martin and many of his co-workers and friends after learning he had been named as Stamford’s 2017 Citizen of the Year.

Editor’s Note: This story is used with permission from Hearst Connecticut Media and the Stamford Advocate. Dudley Williams was the vice-chairman of CT Mirror’s board of directors.

STAMFORD — When Dudley Williams was awarded Stamford Citizen of the Year in 2017, the most common response from people was something along the lines of, “What took so long?”

Williams, the CEO of the Mill River Park Collaborative and former senior vice president of citizenship and diversity for GE Asset Management, was a ubiquitous presence in the community, serving on numerous boards and volunteering for multiple organizations.

Land-use consultant Rick Redniss was on the committee that chose Williams, and he was one of many wondering why Williams hadn’t been chosen yet.

“When people looked at the nominations they said, ‘We didn’t honor him already?’ The body of work he’s done for this community and continues to do is just crazy,” Redniss said, in 2017.

On Friday morning, Williams died at the age of 65 after a long bout with cancer.

Among his many roles, Williams served three terms on the Stamford Board of Education from 1995 to 2004, and was president of the board during his tenure.

Stamford schools Superintendent Tamu Lucero said she was “shocked and deeply saddened” by the news of his passing.

“He has always been a champion to Stamford Public Schools, long after his tenure on the BOE,” she said, in a written statement. “I am fortunate to have been able to count him among my personal friends and someone I could rely on for advice and insight. The Stamford community has lost one of its great leaders.”

Mayor David Martin called Williams’ death a “terrible, terrible loss” for his family and the community.

“He is so much a part of what has made this community great,” Martin said. “I think many aspire to be the family man and the community man that he was.”

Martin’s last encounter with Williams was about three weeks ago, he said, and even though social distancing was still encouraged, Martin couldn’t help but give him a hug.

“We know why we love Dudley and it’s because Dudley loved us,” Pollard said.

Arthur Selkowitz, chairman of the Mill River Park Collaborative, issued a statement on Williams’ passing. Williams joined the collaborative in 2017 as the interim CEO. By August of that year, he was named the permanent head of the organization.

“Dudley brought to the collaborative a long history of community service and a passion for education,” wrote Selkowitz. “Although he said he knew very little about parks when he accepted the position, he knew about community and what parks can do to bring community together. In this he succeeded admirably as he saw how Mill River Park has developed into Stamford’s Central Park and a place where everyone is welcome and everyone comes together in community.”

The Whittingham Discovery Center, which Williams spearheaded, is under construction and “will be an important part of his legacy,” Selkowitz said.

“Dudley was a major force in our community. … Indeed, he was highly respected and admired throughout the community, and our city will be the lesser for his passing,” Selkowitz wrote.

The Board of Education also released a joint statement, touting Williams as “a champion for special education” and instrumental in bringing funding to Stamford schools through the GE Futures grant.

“His commitment to the students of Stamford and to the greater Stamford community through the years was unwavering,” the statement read. “Dudley will always hold a special place in our hearts and in the hearts of all who knew him.”

Besides the Board of Education, Williams also had stints on the Planning Board and Board of Finance.

He served in numerous leadership and volunteer roles for organizations, including the Center for Sexual Assault Crisis Counseling and Education, Children’s Learning Centers of Fairfield County, Stamford Achieves, Urban League of Southwestern Connecticut, Connecticut Science Center and the Nellie Mae Education Foundation. He was on the boards of The Avon Theatre, Connecticut Center for School Change, Ferguson Library, Stamford YMCA, and the CT Mirror.

Williams formed a power couple with his wife Juanita James, also a past Stamford Citizen of the Year winner, and the president and CEO of the Fairfield County’s Community Foundation. James was previously the chief marketing and communications officer at Pitney Bowes.

U.S. Sen. Richard Blumenthal, D-Conn., added his voice to those who remembered Williams’ tireless commitment to the city.

“Dudley Williams was a magnificent, shining star of public service — a dedicated model and mentor for so many,” Blumenthal wrote in a statement. “He brought his unique combination of compassion, energy and insight to bear to serving community and helping friends. Our family has been so proud and grateful for his and Juanita’s friendship. Our hearts go out to his family.”