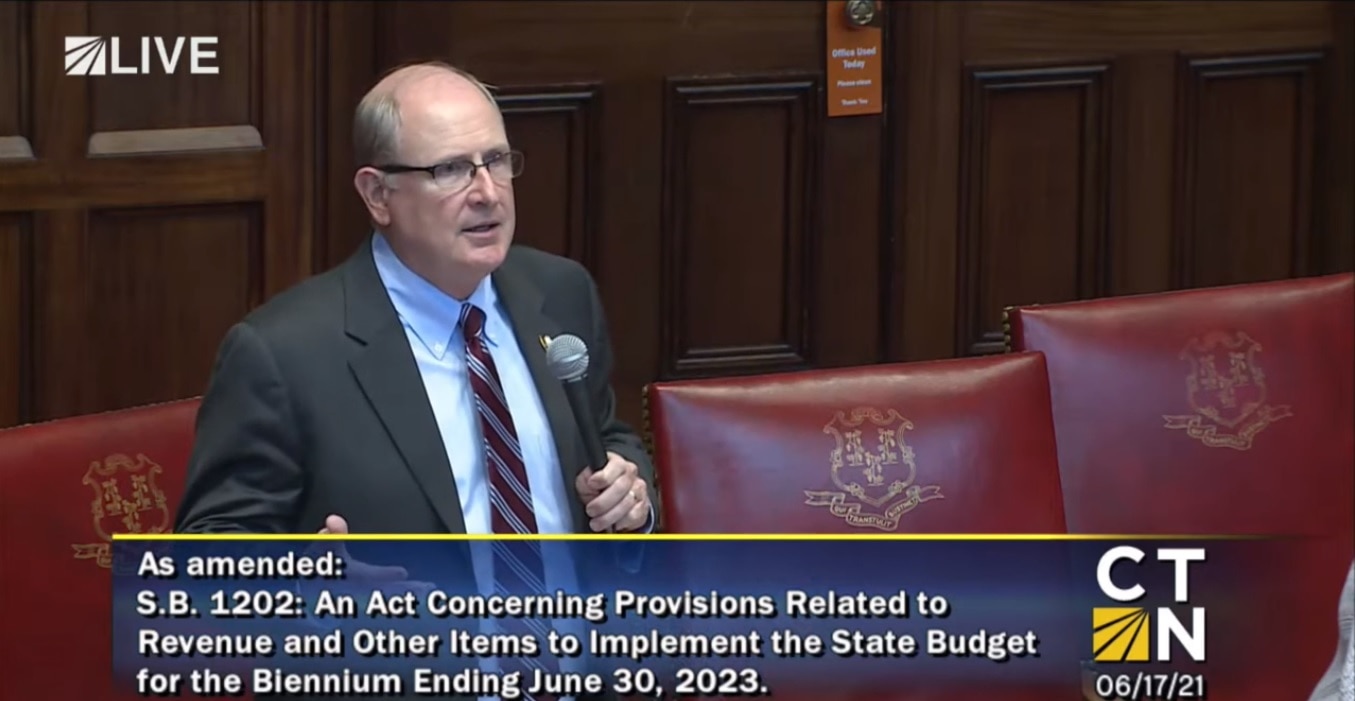 State Sen. Kevin Kelly, R-Stratford, on the Senate floor on Thursday, June 17, 2021, said he regretted not being able to introduce legislation that would close a loophole in the state’s sex offender registry laws.

A Republican senator said he was disappointed that legislators did not have a chance to close an apparent loophole in the state’s laws that allowed a registered sex offender from Massachusetts to be transferred to an East Windsor nursing home this spring — with no notification to state officials.

Kelly was referring to a CT Mirror story that detailed the case of Miguel Lopez, a registered sex offender in Massachusetts who was transferred to the Fresh River Healthcare facility in East Windsor from Holyoke, Mass., in April and was accused of a sexual assault in the nursing home a month later.

East Windsor police are now investigating the Fresh River employee’s allegations that Lopez locked her in his room and forced her to perform oral sex before she managed to escape.

Lopez, 50, was returned to Holyoke that same day by iCare Health Network officials and is now in prison in Massachusetts on an arrest warrant that was issued before he was transferred to East Windsor. The warrant charges Lopez, who is homeless, with failure to register as a sex offender in Holyoke in December 2020.

The case revealed a loophole in the state’s sex offender laws, which do not require nursing home providers to alert the state police when they bring an out-of-state sex offender into one of their facilities.

“The mere fact that we have this situation, this loophole in our laws that can be exploited, is something that needs action taken and needs to be done sooner rather than later — not only for the protection of the residents but also anyone that’s employed or visits these facilities,” Kelly said.

Kelly added it was “something maybe he’d have even offered an amendment on” but that he was prohibited from doing so Thursday.

That’s because the House of Representatives, after passing marijuana legislation and a budget implementer bill late Wednesday night, declared its legislative session closed — in effect tying the Senate’s hands.

Kelly said an amendment to the implementer bill in the Senate on Thursday would have killed the entire bill.

Lopez is at least the third registered sex offender from Massachusetts transferred to facilities run by iCare Health Network in Connecticut since December, although he is the only one the network didn’t report to police, apparently a deviation from their usual procedure.

Why Lopez was sent to the nursing home in the first place is unclear. Sources said he was in the Holyoke Medical Center in Massachusetts for several weeks before he was transferred to Fresh River, on Prospect Hill Road in East Windsor, on April 20.

Lopez is due back in court in Holyoke on June 26.