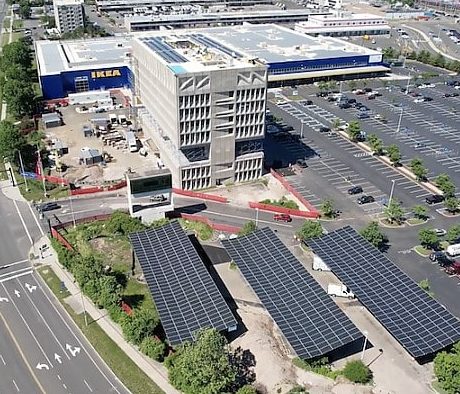 An aerial view of the Hotel Marcel.

The Pirelli building on New Haven Long Wharf’s Sargent Drive has long stood as an icon of the Brutalist architectural style. For more than 20 years, it stood empty and seemingly doomed to end up as a pile of rubble in a landfill. But developer Bruce Becker is determined to prevent that. 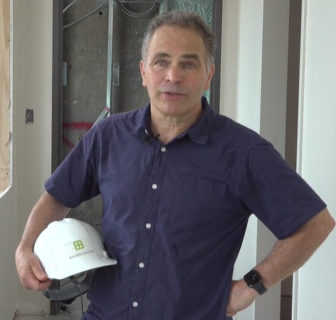 He’s turning the building into an icon of a different time: a model of sustainability for the hotel industry and beyond. “We have to change the way we build,” says Becker. “I couldn’t imagine building a building that was going to contribute to our problem with fossil fuels.”

The Pirelli building, completed in 1969 as the headquarters of the Armstrong Rubber Co., will reemerge in the coming months as the Hotel Marcel, a boutique hotel in the Hilton hospitality family. (It’s named after Marcel Breuer, the principle architect on the original building. Italy’s Pirelli later bought Armstrong.)

Becker provided a guided tour of the construction project (see video) just as hundreds of solar energy panels were lifted and installed on the roof.

The building is an example of a global shift to all-electric living —  a goal advocated locally by the environmental group New Haven Climate Movement. The group has been pushing for the city to shift to electric vehicles, to convert all city-owned buildings to electric heating and cooling, and to urge developers to turn their backs on fossil fuels, and is applauding an electrification resolution recently passed by the Board of Alders.

“This project is a great example of what an electric future could look like,” says Chris Schweitzer, a spokesperson for the group. “It’s really looking to reduce air pollution and other types of climate damage, and produce a much healthier future for New Haven and the world.”

This story was first published in the New Haven Independent.