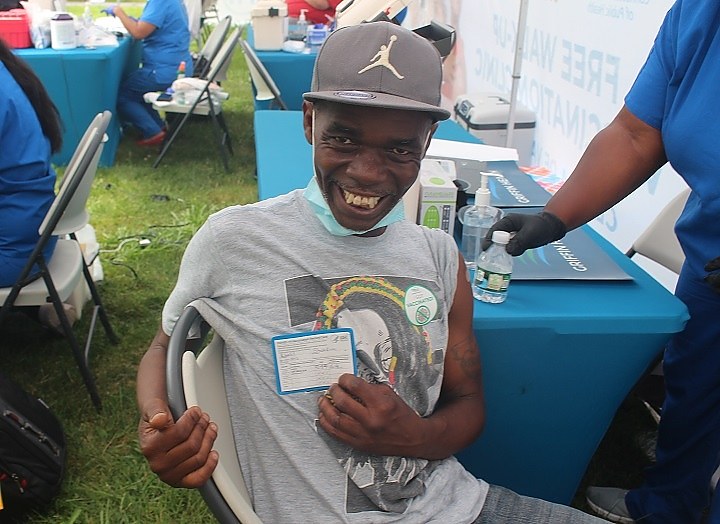 Cedar Hill resident Shahkim Khalil, 48, works as a chef at Moe’s in Wallingford.

After nearly half a year on the fence, Lamont Douglass decided Monday to get vaccinated against COVID-19.

Why now, so relatively late in the pandemic? Because his employer required him to.

He was one of roughly a dozen people to get vaccinated Monday morning at a Griffin Hospital-led pop-up clinic on the Green.

While those government officials pleaded at the presser for Connecticut residents to protect themselves and their communities by getting inoculated against the novel coronavirus, and especially against the surging and uniquely contagious Delta variant, interviews with newly-vaccinated residents like Douglass shone a light on what has led some people to hold out for so long.

They also revealed what has finally pushed them over the edge to get a shot at this stage of the pandemic.

“We are seeing a pandemic of the unvaccinated,” Bysiewicz said at Monday’s presser, echoing sentiments expressed recently by President Joe Biden, Dr. Anthony Fauci and federal Centers for Disease Control and Prevention Director Rochelle Wolensky. Nearly all of those in Connecticut and across the country who are hospitalized or die from COVID are those who remain unvaccinated.

“I’m going to ring the alarm, like Beyoncé says,” said Bond, directing her vaccination encouragement in particular at communities of color. “This is not a joke. This variant is coming, and it’s coming for us. I get that you have mistrust. … Has the health system been fair to us over the years? No, it hasn’t. We know that. But we know there’s an opportunity for change, and your voice matters.”

“I Feel A Tremendous Relief” 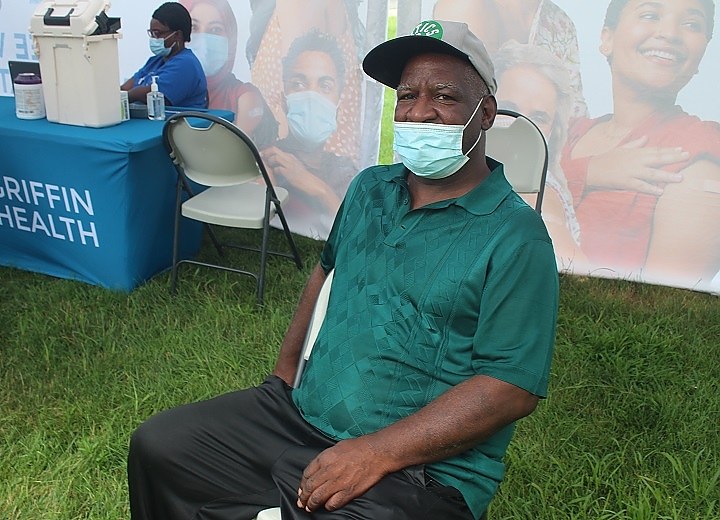 After nearly half a year on the fence, Lamont Douglass decided Monday to get vaccinated against COVID-19 because his employer required it.

Douglass walked up to the clinic on the Green soon before 10:30 a.m. Monday.

When asked why he decided to get a shot now, nearly six months after people 65 and up first became eligible to get vaccinated in February, he said his answer was simple: “My job, they’re requiring it.”

He’s worked in food service at Quinnipiac for the past 16 years, he said.

Since Quinnipiac is requiring all staff and students to get a shot before returning to campus in the fall, he decided to come to the pop-up on the Green to get his first of two Pfizer vaccine doses. Yale University and Yale New Haven Hospital have also recently rolled out vaccination requirements.

All of his brothers and sisters have already been vaccinated, he said, and they’re doing just fine now.

Sal Cacace, a 42-year-old Dixwell resident and currently unemployed food services worker, also showed up Monday to get a shot. He opted for the one-dose Johnson & Johnson vaccine.

Cacace said he wasn’t going to get vaccinated — and then he got sick with COVID. Very sick.

A few months ago, he said, he caught COVID and spent eight days in the hospital, including four days in the intensive care unit.

“It taught me a lesson,” Cacace said.

His doctor recently told him about the infectious new Delta variant, and how he remained at risk for another infection and severe complications from COVID if he didn’t get vaccinated. So he decided on Monday to get a shot.

“I feel a tremendous relief,” he said after getting his shot from Griffin Hospital nurse Rashi Swift.

Lorenzo Garland, a 54-year-old New Havener, sat in one of the fold-out plastic chairs under the Griffin clinic tent, waiting for his turn to get a shot.

“I was scared of the vaccine itself,” he said about his months-long reluctance to get a shot. Family and friends got vaccinated and appear to be doing OK, he said. “They did good.” So he decided to get a shot too.

Cedar Hill resident Shahkim Khalil, 48, said he had two primary motivations for getting vaccinated on Monday.

One was his job. He works as a chef at Moe’s in Wallingford, he said. While his employer has not required staff to get vaccinated, many of his colleagues have already gotten the shot, and they’ve encouraged him to—particularly because he spends so much time in close quarters with them in the kitchen.

His second motivation was his 9-year-old son. Khalil noted that his son is too young to get vaccinated (the three vaccines approved for emergency use in the United States right now are limited to those 12 years old and older.)

“My son came to me” and asked him to get vaccinated, Khalil said. At his son’s encouragement, he did.

Not everyone walking by the Green Monday was as willing to get vaccinated.

Mel Davis, a 22-year-old Waterbury resident who works as a dishwasher in New Haven, said he hasn’t gotten vaccinated yet.

Doesn’t the vaccine have a dead COVID virus in it? he asked. When told that the mRNA vaccines do not, Davis replied, “I’m going to do more research on it.” Many of his family members have already been vaccinated, he said.

Another vaccine holdout, who did not want to be photographed or named for this article, stood alongside his bike by the pop-up clinic’s tent, explaining to the nurses why he refused to get a shot.

Even as the nurses tried to explain that the vaccines do not change anyone’s DNA, and that they are only trying to protect — not hurt — all members of the public, the skeptic waved goodbye and walked away towards Elm Street.

This story was originally published July 26, 2021, by the New Haven Independent.