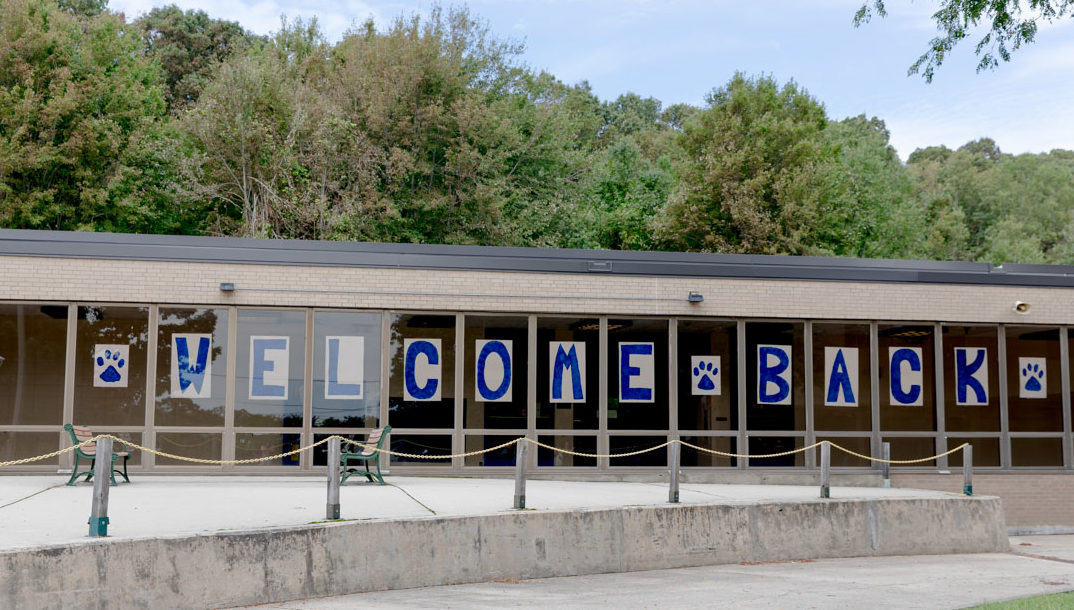 Carrigan Intermediate School in West Haven reopened on Tuesday, Sept. 8, 2020. School districts across the state reevaluated how to proceed with in-person or hybrid learning models during the pandemic, but a recent study shows students who learned in-person scored higher than those who learned remotely.

Students across Connecticut lost ground academically during the pandemic, according to data released by the state Department of Education on Wednesday.

But students who learned fully or mostly in person throughout the 2020-21 school year had better outcomes than those who learned in hybrid or remote learning models, especially in math, according to the report.

“I would say, from an instructional standpoint, what we were hearing with frequency is some of the instructional strategies required for that deep conceptual understanding of mathematics you just could not do in this environment, as teachers were really practicing those mitigation strategies,” said the department’s Chief Academic Officer, Irene Parisi.

“That’s a hypothesis,” Parisi said. “We want to uncover more of that, and certainly what are alternate strategies, but I would say that is one contributing factor.”

The department examined results from the state’s Smarter Balanced Assessment Consortium (SBAC) exams, SAT School Day, Next Generation Science Standards Assessment (NGSS) and the Connecticut Alternate Assessment System. Because the pandemic caused schools to shut down during the latter half of the 2019-20 school year  — which led to the U.S. Department of Education waiving assessment requirements for that school year — the report does not include information from that period.

Remote testing was allowed last year for SBAC and NGSS exams in response to the pandemic, but in-person assessments were “strongly recommended.” About 82% of students in grades 3-8 tested in person on the SBAC, and 11.5% tested remotely. Among students who learned in-person or hybrid, more than 95% of the students took the test in person, while only 37% of students who learned remotely last year took the tests in person. 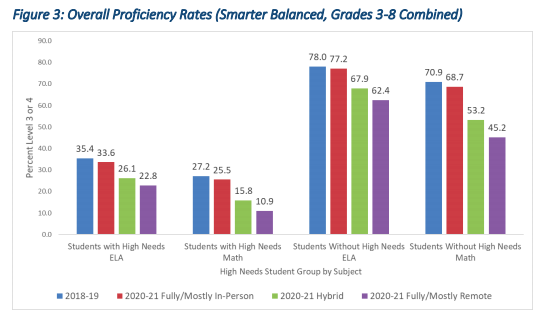 The report released Wednesday only takes into account the scores of those who took the tests in person, but it notes that the department “confirmed that at the state level, the demographics of those who tested in-person are reasonably similar to those who tested remotely or not at all, so as to allow for these analyses and related inferences.”

Ajit Gopalakrishnan, the department’s chief performance officer, said they looked only at assessments taken in person because remote testing was a new concept that the department had to study “to see if the results are comparable.” He added that an initial analysis showed that students who tested remotely performed slightly higher than they expected.

“It’s a brand new construct, remote testing, so out of an abundance of caution, we said, ‘If we’re going to make state-level, high-level inferences, we’d be safer staying with test scores that come from tests that are administered in person,'” he said, adding that they have confidence in assessments taken in-person.

“In terms of the remote scores, they are good scores, they just seem to be a little bit higher, which we need to study more, and we need to analyze more,” Gopalakrishnan said. “So out of an abundance of caution for this go-round, we said, ‘Let’s just look at the test administered in person.'”

“This was an odd year. So for that purpose, we actually looked at the students who tested in person, among the fully remote learners, and made sure that they look similar to the kids who did not test in person,” he said, adding that those who tested in person were slightly less representative of students with high needs or who are eligible for free or reduced lunch.

“That means that if more of the remote learners had tested in person, potentially more students with high needs would have been part of that test population,” he said. “And our guess is that would actually only have strengthened our conclusion, which is: Students who learn in person lost the least ground, and students who learn remotely lost more ground.”

Parisi said the department is going to ask districts to use this data alongside data they have at a district level to help understand where students’ needs are and match them with the right instruction, resources and interventions, adding that they do not want “to get into these vicious cycles of remediation.”

Last week the U.S. Department of Education approved Connecticut’s plans for its state department of education’s $110 million allocation of the $1.1 billion in  federal relief  funds the state received. Part of the department’s plan includes using funds to support learning acceleration for students who missed the most instruction time, as well as credit recovery and “high-dosage tutoring” for districts that need it most.

“As a whole agency, [we’re] working with districts to really determine and prioritize those equity-based strategies, and utilizing their relief funding to make those a reality in their districts,” Parisi said.