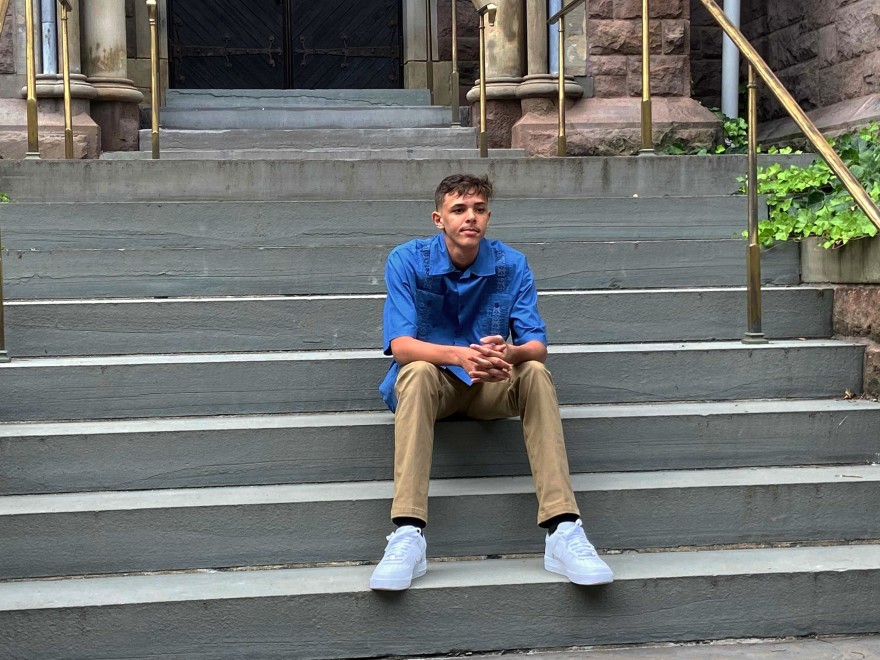 “He just outright refused to do any online learning. He’s like ‘I’m not learning anything.’ And it was really hard to convince him,” she said.

Christian, who has autism and ADHD, was one of the thousands of special education students who missed an excessive amount of school during the pandemic, as defined by not showing up at least 10% of the time.

As the delta variant and high infection rates threaten to send students back to remote learning, students with disabilities are positioned to miss the most school unless something changes.

Last school year, one out of every four students with autism was chronically absent. That’s twice the rate compared to before the pandemic. One in three students with ADHD and over half of those with emotional disturbances missed excessive amounts of school.

Chronic absenteeism rates were particularly high in low-income districts like New Haven, where Christian is enrolled. He didn’t have the option to take classes in-person for much of the year. In New Haven, two-thirds of students who have ADHD and half of those with autism were chronically absent last school year.

”I feel like the whole year was wasted. There was no convincing him. To him, learning happens in person,” she said. “He struggled. He really struggled.”

Parents in affluent districts also saw their children wrestle to stay engaged during the pandemic.

The mother of a middle school student from a well-off town in Fairfield Country whose daughter has ADHD and anxiety — whose name is withheld to protect her daughter’s privacy — said last school year was a challenge.

“We were in remote learning again, and very soon after the school year started, we were realizing that [her daughter] was struggling majorly academically. It looked as if she wasn’t doing homework, and she was going into a depression, and a sort of paralysis in terms of academics. Her anxiety level hit an all-time high, and she was panicking about being called on in class. There’s an element that’s kind of anxiety-inducing, where she feels everyone’s looking at her.”

A digital inventory of all the assignments she had to complete greeted her daughter every time she logged on to school, causing her to become more anxious. So her daughter started avoiding school altogether.

It was painful for her mom to watch.

“She started crying and started to not do what was expected of her,” she said.

Statewide, it’s been hard to gauge if more parents are more dissatisfied during the pandemic with the education their children with disabilities are receiving.

Last school year, the state saw a two-thirds drop in the number of complaints being filed by parents of children with special needs. State education officials wouldn’t weigh in on why there was such a big drop, but Kathyrn Meyer, an attorney who works with low-income families at the Center for Children’s Advocacy, says she may know why.

“The clients that we work with are the least likely to file complaints. They don’t have access to understanding what their rights are,” she said. “Most people did not know what they were entitled to during this period. I think people gave districts a lot of grace, which was, of course, warranted, but I also think that a lot of parents … thought maybe no legal rights were still in place.”

When the wealthy parent from Fairfield County faced barriers from her district to provide accommodations for her daughter, her family decided that instead of filing a complaint and waiting, they would just spend thousands of dollars to get the help they needed.

“You feel a little nervous about being a squeaky wheel. You feel nervous about making any problem, and you just want to make it all go away,” the mom said.

Through tears, she explained her daughter was struggling too much, and that the $5,000 she has spent so far has helped.

“She’s no longer being seen as someone just slacking off, but actually a bright child who was being kind of left behind,” she explained. “When we started with a counselor, and an executive functioning coach and all these things that we put into place, she was literally a shell of the person that she is now.”

But many families can’t afford to cover these supports, hesitate to file a complaint because it might make things worse, or don’t have the ability to hire an attorney to help them access services federal and state law may say they are entitled to.

“Our clients are still in and have been in survival mode during this whole time. We’re talking about low-income families, low-income parents and children, who are trying to fight to keep their jobs and to keep their shelter and food,” said Meyer, the attorney who represents low-income clients.

Some families choose to call The Connecticut Parent Advocacy Center for help navigating the special education labyrinth. The federal government funds Beth Reel and her team to answer those calls.

“We had a sharp drop off. We were in a crisis mode. We were having this thing happen to us that we had never experienced before. What we found was families were completely overwhelmed, and they just did not have the bandwidth to pick up that phone or send that email to try to figure out what was going to happen for their child in school.”

Education advocates and experts suspect the drop off is happening nationwide given all the trauma families are facing during the pandemic. In addition to the drop-off in complaints and calls, and the uptick in chronic absenteeism rates, there is also no explanation in the drop of students enrolled in school at all.

“Local school districts have really made herculean efforts to collaborate with parents to be able to address those issues. You know, it’s hard to kind of give a broad brush, sort of state of affairs on this, because each child’s individual situation is so different,” said Bryan Klimkiewicz, director of special education at the state Department of Education.

State education officials say it’s difficult to make broad conclusions about the delivery of special education during the pandemic. This week, however, it became clear just how far behind these students are falling.

Only 7% of children with special education needs who were learning from home last year were where they should be academically in reading and writing and only 4% in math, standardized test scores show. Students attending school predominantly in-person fared much better.

The state’s child advocate and other civil rights groups have been calling on the state for months to do more than just offer guidance.

“The numbers are pretty jaw-dropping. You’ll see upwards of 60% to 80% of kids with certain disabilities are chronically absent in certain districts,” said Sarah Eagan, the leader of the Office of the Child Advocate, a state watchdog agency that first requested these absenteeism rates.

Eagan wants the department to regularly collect and publicize the absenteeism rates by disability and district and to convene community organizations to create action steps for the state and districts to improve things. Meyer, the attorney who represents low-income families from the Center for Children’s Advocacy, wants the state to do systemic reviews of the special education districts are providing during the pandemic.

“Come to a conclusion that XYZ needs to happen to remedy this problem, if indeed there is a problem. We would be looking to the state to do this in a more authoritative way to show different districts, ‘hey all, this work has been done to really go through this fact-finding process, and we’re coming up with a plan that we think will really make it better, and we expect you to carry out this plan,” she said.

But for now, the Lamont administration seems to be focused on keeping schools open as the best path to improve things for these learners.

“I think we learned last year there’s no substitute for in-person education. I think we made every effort possible to make it easier for people to learn remotely, especially during the worst days of the pandemic fall, but right now we’re doing everything we can to convince parents that their kids can go to our school safely; kids wearing masks, teachers being vaccinated. That’s what our priorities are,” said Lamont.

Back in New Haven, Sotillo’s son Christian graduated from high school during the pandemic, but because he has a disability, federal law requires he be provided services to help him transition into a career. He has signed up to take courses on how to become a plumber. He is still waiting to hear if those courses will be in-person.