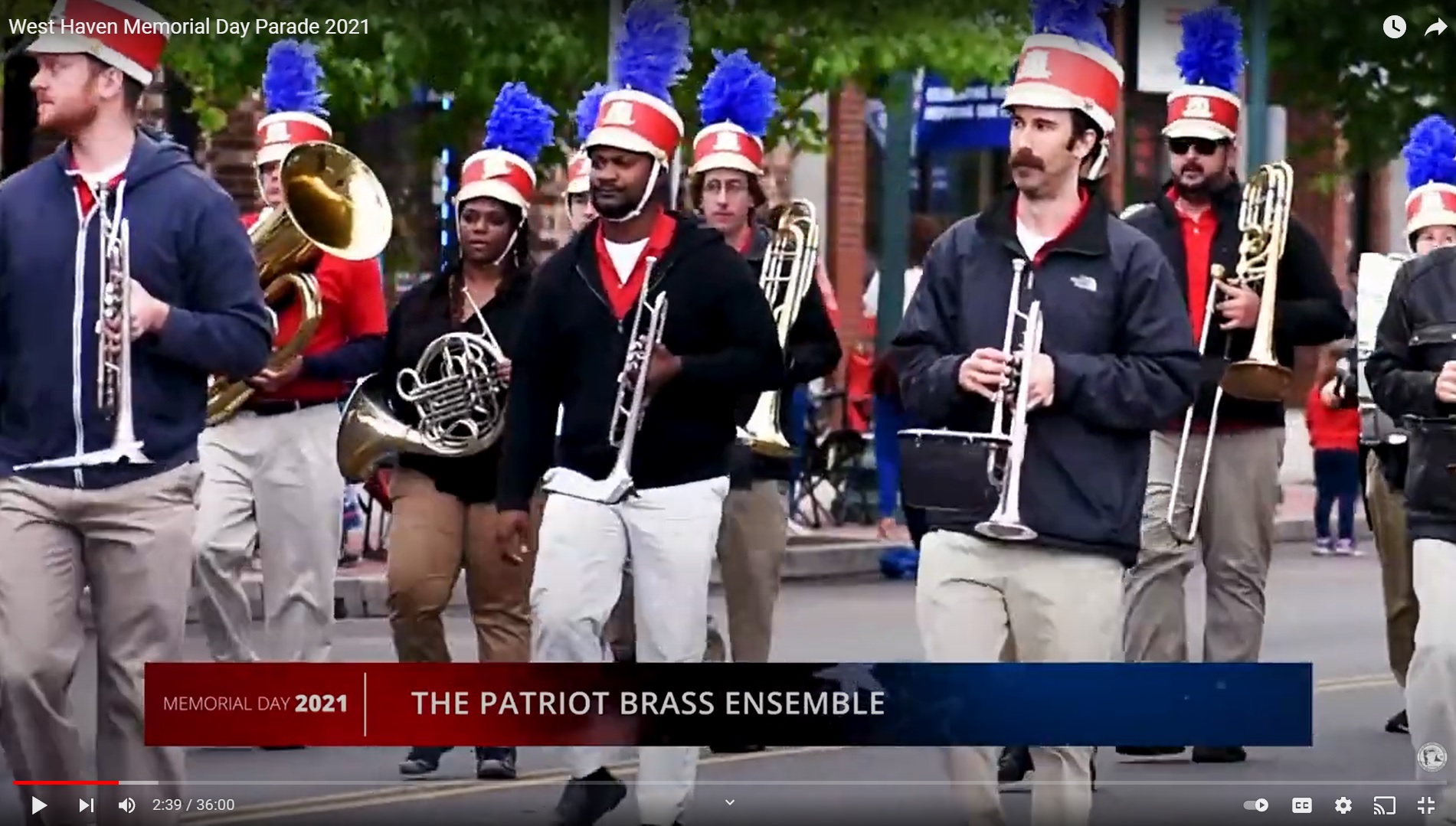 West Haven officials spent tens of thousands of dollars in federal COVID relief funding on Christmas decorations, payments to a city councilman’s business — and a marching band that performed at the city’s Memorial Day parade, according to records reviewed by the CT Mirror. 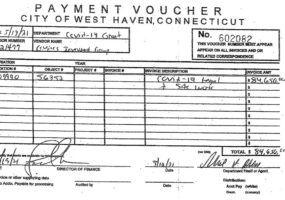 All of those expenditures were paid from the more than $1.1 million in federal CARES Act funding that West Haven received last year, according to city invoices, receipts and payment vouchers.

West Haven’s use of that federal relief funding is already at the center of an ongoing financial scandal. Two West Haven employees, including former state Democratic lawmaker Michael DiMassa, were arrested by the FBI in the past month for allegedly funneling more than $636,000 in federal aid to a shell company they controlled.

The records, which The Mirror obtained through a request under the state’s Freedom of Information Act, document how the city spent the remainder of its CARES Act money.

West Haven Mayor Nancy Rossi did not return a phone call or respond Friday to an emailed list of questions for this story. Her recent reelection bid is under review — a recount is scheduled for Sunday. Unofficial results show Rossi won by 29 votes.

But Barry Cohen, her Republican opponent for mayor, called some of the city’s CARES Act expenditures “highly suspect.” “I seriously question whether marching bands and holiday decorations are appropriate uses,” he said.

The CARES Act funds were approved by Congress in early 2020 to assist municipalities that were faced with unexpected costs stemming from the coronavirus pandemic. And the federal rules surrounding that funding set up broad categories for how the cash could be used by towns and cities. 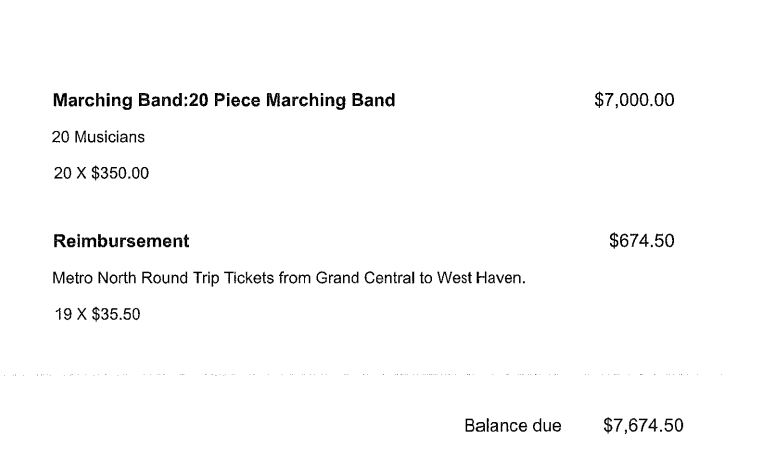 This portion of an invoice from the Patriot Brass Ensemble details how much the city of West Haven paid the 20-person marching band for traveling to and performing in its memorial day parade. It was paid from COVID-19 relief funds, city documents show.

The invoices reviewed by The Mirror this week totaled more than $500,000. Most of those expenses seem to fall within the federal guidelines, but other expenses paid out of West Haven’s CARES Act fund don’t have clear connections to the COVID-19 pandemic.

For example, West Haven spent $7,674 to hire a 20-person marching band to perform at its Memorial Day parade. The documents show the city hired the Patriot Brass Ensemble, a group out of New York City.

In the expense reports, city officials noted that the money for those performers specifically came out of the CARES Act fund. And they explained that they had to spend $7,000 on the musicians and another $674 on their round-trip tickets from Grand Central Station because other bands were not available to play in the parade.

The state Office of Policy and Management, which disbursed the CARES Act funding to Connecticut’s 169 towns and cities, recently hired the auditing firm CohnReznick to inspect all of West Haven’s federal expenditures over the past year.

Chris McClure, a spokesman for OPM, could not be reached for comment on Friday afternoon, but officials with the state agency said this week that the auditors from CohnReznick were already collecting financial documents from the city.

Those records also show the city paid more than $13,000 to two West Haven companies — Ferrie Brothers and Reliable Fence — for reportedly fixing property damage caused by storms in August of 2020. City officials also spent hundreds of dollars for new trees to be planted, Halloween preparations and new Christmas lights, according to the financial documents. 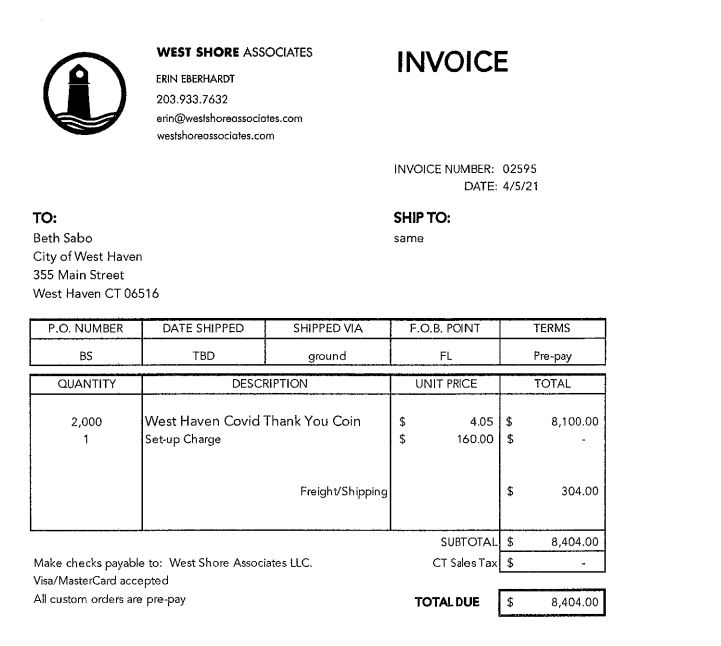 The city also spent $200 on “vaccine T-shirts,” $1,500 on videographers who recorded celebrations for Juneteenth and Martin Luther King Jr. Day, and another $1,000 for a design company that created a “West Haven COVID Logo.” All three of those companies are based in West Haven.

Beth Sabo, West Haven’s human resources director, also spent $8,404 on specially made coins that were given out as “employee recognition” awards. She purchased 2,000 of them from West Shore Associates, another West Haven company, according to the documents.

The city’s records also show that a trucking and towing company owned by Robert Bruneau, a West Haven city councilman, got paid from the federal funds.

That company, Chips Wrecker Service Inc., was paid at least $19,600 out of the federal relief funds through three separate invoices to reportedly deliver food to people, maintain generators and “set up, take down and cleanup” after COVID-related events, according to the city documents.

Bruneau, a Democrat who was re-elected to the city council last week, said he, his sons and several other employees at his company put in a lot of time during the pandemic providing those services to the city, and in most cases, he said, they did so on a volunteer basis. 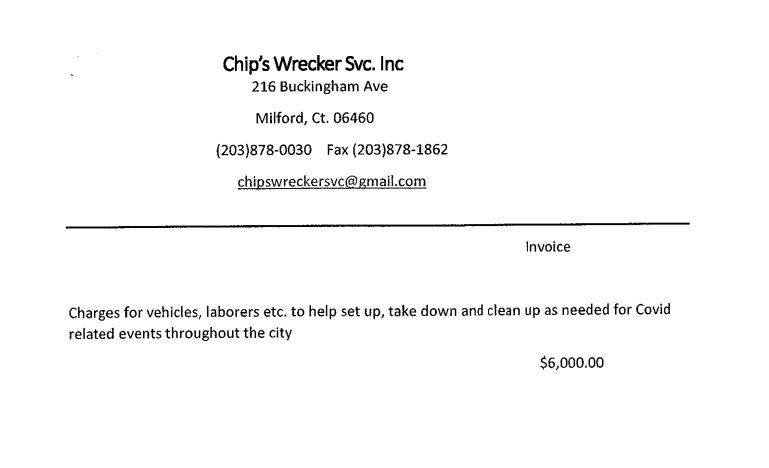 A company owned by West Haven Councilman Robert Bruneau was paid more than $19,000 to deliver food and clean up after COVID-19 related events.

“I was asked to perform a service, and that’s what we did,” Bruneau said on Friday. “We were called in by the city to handle it. I did exactly what they asked me to do.”

“There was a whole lot more time donated than was billed,” he added.

He said he didn’t know how or why his company was chosen, but he said his businesses have contracted with the city in the past.

Any questions about the procurement process, Bruneau said, would need to be answered by Thomas McCarthy, West Haven’s Public Works Director.

On Friday, McCarthy told the Mirror that he never saw the invoices submitted by Bruneau’s company and claimed he was “not privy” to that information.

Andrew Brown joined CT Mirror as an investigative reporter in July 2021. Prior to moving to Connecticut, Andrew was a reporter at newspapers in North Dakota, West Virginia and most recently South Carolina. He’s covered business, utilities, environmental issues, the opioid crisis, local government and two state legislatures. Do you have a story tip? Reach Andrew at 843-592-9958