Lamont abandons his party in his push against university unions 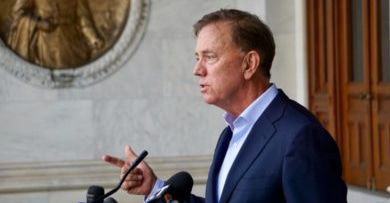 In 1939 Ernest Hemingway published a piece in Esquire entitled “The Snows of Kilimanjaro.” There, he quoted F. Scott Fitzgerald’s earlier remark that “the very rich are different than you and me.”  Hemingway’s retort was “Yes, they have more money.”

We live in a state where the very rich have one of their own at the pinnacle of power by way of Gov. Ned Lamont.  One estimate places his net worth at $90 million to $332 million.  He earns many millions in income off this wealth and that income just arrives magically every year with zero effort on his part.  A lot of this money is inherited, as was his second (or third?) property on a bridgeless island in Maine.

Lamont also seems to be on an island ideologically, at least in terms of his party’s platform.  His appointees have hired a law firm, Jackson Lewis, as part of contract negotiations with employees at the Connecticut State University system.  The New York Times reports this firm was previously accused  by a client of “malpractice and of advising it to engage in illegal behavior” as part of an effort to subvert a union in South Carolina.

According to its 2020 party platform, “Democrats believe that all jobs in the caring economy must come with family-sustaining wages, good benefits, access to paid leave, fair and predictable schedules, access to training and professional development, and the ability to join a union and collectively bargain.” Let’s look at how Lamont and his union-busting lawyers are crafting the “caring economy” in Connecticut.

They have proposed to more than double workload (they’ve subsequently claimed this proposal was a “mistake”).  So much for a predictable schedule.  Wages on state university campuses have been on a decline for more than 17 years, in real terms.  For some reason, though,  Lamont’s political allies complain bitterly about two years in which the decline was halted.  Apparently, in their view, only income which is inherited is above reproach.  The Lamont administration has worked to slash the state university payroll and support by almost $40 million.  Some of this cut is retroactive to paychecks employees have already received and spent.  Forget about family-sustaining wages.  Apparently educators are supposed to ask their families to somehow return the sustainment from last year.

In response to the proliferation of “alternative facts” in our federal government over the past four years, the party platform also claims “Democrats will protect the independence and intellectual freedom of scientists.”  Lamont’s administration would end academic freedom for scientists and others on our university campuses. Scientists: you are free to discover and think anything you want.  But the first rule of science in Lamont’s state is that you don’t talk about science.  Ironically, one leader of this attack against science is none other than Matt Fleury, the head of the Connecticut Science Center.

The Lamont administration is diametrically opposed to the Democratic party platform in other ways.  As I have detailed elsewhere, in the same year that Lamont appointees have slashed public university support, the governor has seen fit to leave untouched a $130 million subsidy for private education.  Rather than invest in campuses which specialize in providing accessible education for students from Connecticut families (students who typically graduate and stay in Connecticut), Lamont is steadfastly supporting campuses which are least accessible to our students.  This is arguably one of the most regressive higher education policies of any Democratic governor in the United States.

There is perhaps no better accompaniment to the abdication of shared values than self-dealing.  Lamont has paid millions to Boston Consulting Group, the former employer of one of his close courtiers, and former Yale classmate, Indra Nooyi.  Following Lamont’s lead, at least one of the higher education political appointees in Connecticut seems to be engaged similarly.  David Jimenez is a principal in the Hartford office of Jackson Lewis.  He is also a member of the Board of Regents of the Connecticut State University system.  Jimenez sits on a board with influence over allocating state funds for legal services in higher education.  His firm is the financial beneficiary of that board’s decision to hire Jackson Lewis.  Was this contract for services put out to bid?  Did  Jimenez play an active role in allocating the contract to his own firm?  In doing so was Jimenez acting in his own self-interest instead of Connecticut’s students?  These are questions in need of an answer.

We have just lived through four years in which seemingly good people  elected to serve our federal government have set aside their traditional values in silent consent to a “leader” who ran roughshod over those values.  Will elected officials in Connecticut behave similarly while  Lamont abandons his party’s platform in pursuit of a set of priorities that he, alone, seems to understand?  If so, what will be the cost for our state and the younger generations whose most accessible source for higher education is likely ruined in the process?  For the sake of our state’s future I hope we begin to actively and thoroughly explore these questions, particularly as we head into the gubernatorial primary.

Brendan Cunningham, PhD, is a Professor in the Department of Economics and Finance at Eastern Connecticut State University