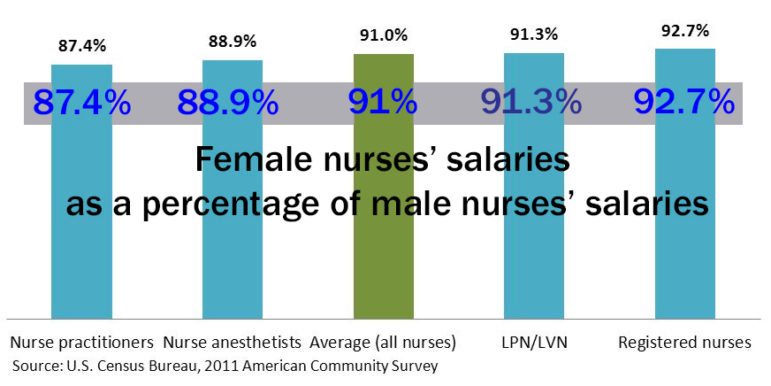 Statistically, I will earn $220,000 less than my male counterparts at work with the same training, experience, and hours worked by the time I retire — just by nature of being a woman. This is the gender pay gap and there is no denying that it exists, even though it remains surprising to some in this modern world.

Would you be more surprised to learn that I am a nurse and the gap still exists? The gender pay gap holds strong even in fields dominated by women. 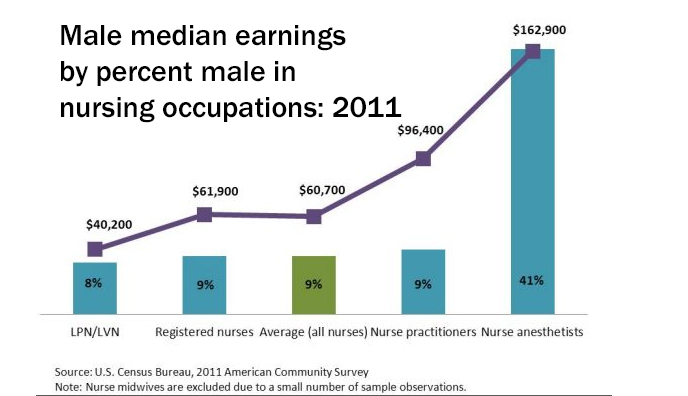 In the past, nursing was considered a “pink-collar job” that was only acceptable for women. Thankfully, to the delight of happily employed male nurses everywhere, times have changed. Although more men than ever before are entering the nursing workforce, women still make up the vast majority of nurses.

Unfortunately, in a crowd where females still outnumber males 10 to 1, that one is still earning more money than the rest of us, $10,000 per year more, in fact.   How did this come to be considering there was a time in history when every nurse was, in fact, a female?

There are several reasons why male nurses may earn more than females, some can be accounted for in the statistics, and some cannot.

Male nurses are more likely to be in higher-paying, administrative positions, and less-likely to work part-time to stay at home more with their children. However, even when accounting for all variables, females still earn roughly $5,000 less per year than males in the same position, with the same experience, working the same number of hours.

There are societal influences on women’s ability to remain in full-time positions and advance into administration as well, such as limited maternity leave, and lack of affordable childcare, which both typically affect a mother’s career much more than a father’s. Other factors can’t be controlled for in the statistics. For a variety of reasons including perceived inability to negotiate starting salaries set by hospitals and not wanting to be perceived in a negative light, women are much less likely than men to negotiate for their salaries.

Increasing the number of males in nursing has the possibility to make wages better for all. Historically, female-dominated occupations earn less money than both male-dominated and mixed-gender jobs. The influx of males into nursing can, and has, raised everyone’s wages in the field. However, the gap is still present, and we should challenge it on every level starting at the top with advocating for legislation allowing for improved maternity leaves for all employed women. In addition, advocating for paternity leave and the right and ability for fathers to take equal time off to care for their children will offload the sole responsibility on the mothers and put men and women on an equal playing field. Additionally, supporting legislation for affordable childcare for everyone allows both mothers and fathers to maintain their full-time employment status, something that most families need to make ends meet in our current society.

On a more individual level, women in nursing should not be afraid to negotiate their salaries or ask for a raise when they feel they have earned it. Our male coworkers surely aren’t afraid to do this. Employers should examine  the hourly rates and salaries of their male vs female employees in similar roles. If they aren’t equal, employers are in a powerful position to make some changes and begin the trend of narrowing the gap.

I ask the question: are your male employees worth more than your female employees in the same positions with similar experience? Are they more valuable? If not, why are they being compensated as though they are? The gender pay gap is not an unavoidable, unchangeable fact of life. We all went into nursing to make a difference and help people and now it’s time to use our loud nurse voice to advocate for someone else — ourselves.

Lauren Kerrigan, RN, is a nurse practitioner student at the University of Connecticut.