One mother’s campaign to empower parents

Gwen Samuel knows the pain of sending her son off to a low-performing school every day. And she remembers the day she decided to pull the “parent trigger.”

“I will never forget that day: May 26,” Samuel said, referring to the day in 2010 that then-Gov. M. Jodi Rell signed a sweeping school reform bill. Among other things, the new law enabled parents to help reconstitute failing schools. “It changed my life. I realized parents need more than just a voice in their schools. They need one in Hartford. Teachers have teachers unions. Where do parents go?”

Gwen Samuel: ‘Parents need more than just a voice in their schools. They need one in Hartford.’

That’s when Samuel decided to create a statewide union for parents with the goal of giving parents from urban areas a louder voice in policy decisions.

“Parents and children are being put on the back burner. We don’t do well with implementing best practices for educating our kids,” the mother of two from Meriden said.

The union is officially launching this Monday at its first event in Hartford. Samuel said hundreds of parents have already emailed her asking her how to get involved ahead of the event.

There are an estimated 500,000 parents statewide who send their children off to public school each day, Samuel hopes 50,000 of them will join to her union.

“We should be bigger than the teachers’ unions,” she said, referring to the Connecticut Education Association and AFT Connecticut, which between them have nearly 70,000 members. “I know they call me the trouble maker, and I am okay with that. Parents need to have more power than they do now.”

Samuel has been at the Capitol several times in recent months testifying on behalf of various education reforms, and she’s well-known to lawmakers.

Stepping up to the microphone last month before a roomful of legislators to testify in support of a “money follows the child” bill that overhauls how schools are financed, she promised to be brief.

Sitting next to her two children, Samuel told members of the committee, “At a minimum, we should make sure there is equal funding across the board… If I need [my children] to go to another school I want to know that I have that choice.”

But she said her children are stuck in Meriden Public Schools–her son attending a school the State Department of Education has listed as one of the worst in the state–because she cannot afford to send him to private school and there are no charter or magnet schools for him to attend.

Rep. Gary Holder-Winfield, leader of the legislature’s Black and Puerto Rican Caucus, was so moved by her testimony, he decided to tell all 1,700 of his Facebook followers.

Samuel in the film ‘From Worst to First’

“Gwen Samuel is testifying and amazing as usual,” he wrote, which was quickly followed by other legislators chiming in on how “fantastic” she is.

But not everyone is supportive of Samuel’s “school choice” initiatives, including the mayor of Norwalk. When a homeless mother was arrested for sending her child to a public school in Norwalk — a district where she did not live — Samuel pounced and began rallying national attention to the story.

“I’ve been on the phone all afternoon,” she said from her home office. “That mother just wanted to send her child to the best school. She should be able to do that.”

“Do you correct that achievement gap by saying, ‘Hey there are no rules. Just let everyone go where they want to go?’ Or do you start saying we have to improve all the schools in all the cities?” he asked.

Ray Rossomando, the legislative coordinator for CEA, the state’s largest teachers’ union, acknowledged the union is going to differ with Samuel on some issues, but said he welcomes the debate.

Holder-Winfield said Samuel “is a force to be reckoned with… She can be a major stumbling block if she isn’t on your side. That woman has been here changing the discussion of education.”

He also said minority parents have to be more vocal on the educational needs of black, Hispanic and other minority populations.

Samuel has also captured the national media spotlight. Parenting Magazine published a story on her and sent her to their Mom Congress, where she met the nation’s top education officials and reformers. She said she has been using and building those relationships to help parents in Connecticut.

And with 198 urban schools in Connecticut identified as low performing and the state routinely holding the title of having one of the largest achievement gaps between poor students and their affluent peers, Samuel said it’s time for more parents to be a the table as laws are made.

“I believe we have gotten complacent as a state in regards to expectations,” she said in the film From Worst to First: Closing the Achievement Gap in Connecticut Schools.

Connecticut does already have one parent advocacy group at the table, Connecticut Parent Power, but leaders of that group say there’s plenty of room for more parent voices in policy decisions. 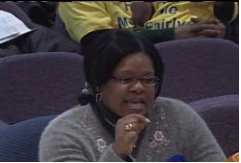 “There are plenty of parents in Connecticut whose voices are not being heard. Legislators are barraged by lobbyists, so I think it’s always good to have more voices advocating for parents and kids,” said Paul Wessel, one of two full-time staff for Parent Power, which has 2,500 active parent members.

Samuel’s group also has a different focus with its emphasis on school choice. Wessel said his group has not yet taken a stand on that, and has instead concentrated its resources on health care and early childhood education. Parent Power supports requiring employers provide their employees with paid sick days and including a “public option” in SustiNet.

Wessel said getting a larger voice from parents at the Capitol has proven difficult during the 10 years Parent Power has been around.

“Parents are not well organized and not well funded. Teachers have a strong voice because they pay dues and that allows them to hire staff, researchers, lobbyists…” Parent Power gets its funding from Universal Health Care Foundation of Connecticut and Graustein Memorial Fund.

While Samuel has big plans for what she wants the parents union to achieve, she concedes that finding the financial backing is a struggle.

She said she is depending on businesses and members of the community to contribute their time and money. She is working full time on the union without pay; fortunately, she say, her husband is supportive of the effort.

“I have learned how to make a lot of friends. Right now it’s a squeaky wheel to get changes but I think if we mobilize parents and get our voices heard things will change, they have to.” she said.