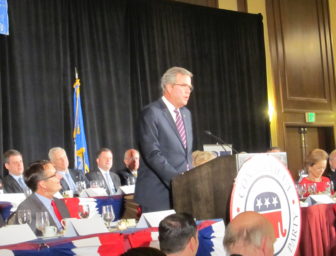 The former Republican governor of Florida, a potential presidential contender,  angered conservatives Sunday by saying some undocumented immigrants are in the U.S. as an “act of love.” He recalibrated his message Thursday, but did not retreat from his demand for comprehensive immigration reform.

The U.S. needs to become “young and dynamic again,” he said. “That means we should consider immigration reform not as a problem, but as a huge opportunity for us to be able to bring economic status …”

Sustained applause from an audience of about 800 at the sold-out dinner drowned out the end of his sentence. In Connecticut, where the rightward tilt of the national Republican Party is widely seen as damaging the GOP brand, such talk inspires.

Bush, 61, is the younger brother of President George W. Bush and son of President George H.W. Bush, who was the last Republican to carry Connecticut in a presidential election. His grandfather was an Eisenhower Republican who urged the GOP’s platform committee in 1956 to endorse the U.S. Supreme Court’s decision in Brown v. Board of Education, which struck down segregation in public schools. Prescott Bush said the platform should be “free of equivocation on civil rights.”

The former governor said he was surprised that his comments on immigration Sunday created such a stir.

“I’ve been saying this for the last three or four years, said the exact same thing I’ve said regularly,” Bush said. “The simple fact is there is no conflict between enforcing our laws, believing in the rule of law and having some sensitivity to the immigrant experience, which is a part of who we are as a country.”

Bush said it makes no sense, nor is it an “American value,” to force people to stay in the shadows.

Immigration long has been a comfortable subject for Bush, who met his wife, Colomba Garnica Gallo, while studying in Mexico as an exchange student.

“It was truly one of those love-at-first-sight deals,” Bush said, recalling seeing her in a town square. “That’s the way it is.”

He said two of their three grandchildren are “Iraqi-Canadian-Texas-Mexican-Americans,” or “quadro-hyphenated Americans.”

The ballroom at the Stamford Hilton emptied in minutes after Bush finished speaking. The workers who rushed in to stack the chairs and break down the tables included Haitian immigrants who spoke to each other in a French patois.