Could the ‘Shared Solar’ movement work in shady Connecticut? 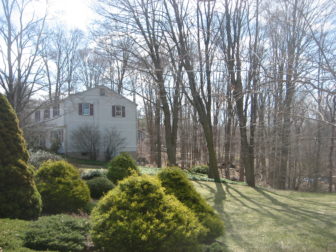 Eugene DeJoannis's Manchester home would be a perfect candidate for solar energy -- except that his neighbor's trees shade his roof from the sun.

Manchester – Eugene DeJoannis stood behind his house one recent sunny morning and explained why it should be the perfect candidate for a solar electric system: “It has a nice, south-facing roof. It’s a simple roof. It has no obstructions on it.”

“We have a wall of trees,” he said. And they’re not even his trees, so he’s stuck with them.

“We’re nice and cool in the summer,” DeJoannis said. “The downside is we just can’t do solar.”

DeJoannis has plenty of company. Conservative estimates are that 80 percent of homes in Connecticut are unsuitable for solar. Many are shaded like his or face the wrong direction. Others have obstructions such as chimneys, skylights, dormers or turrets and other odd angles common to historic New England housing stock.

And then there are the rental properties, condos and other shared structures that generally are ineligible for valuable solar subsidies and also defy figuring out who pays for what.

A potential solution is grinding its way through the legislature this session. Officially it’s called shared clean energy – but its shorthand is shared solar since that’s how it would play out. But the measure faces pushback from opposite ends of the spectrum: those who say it doesn’t do enough and those who say it may go too far in financially upending the classic utility-run electric system.

'The idea of shared solar ... is inevitable in my view,” said Rep. Jonathan Steinberg, D-Westport

“The idea of shared solar – where a number of entities can pool their interests and create larger solar fields and everybody benefits – is inevitable in my view,” said Rep. Jonathan Steinberg, D-Westport, who is a vice-chair of the Energy and Technology committee and one of the measure’s chief proponents. He thinks that the proposal’s current form – pilot projects in two communities over three years – is too little.

“I could probably name 10 projects that could be done in the state tomorrow if we had the means to do so,” he said.

Shared solar, also known as community solar, is essentially a virtual solar system. Instead of panels on a roof going directly to that house, a large solar field would be installed where there’s room. Homeowners could subscribe to it, and the local utility would credit them for the solar, even though the actual electrons go into the grid.

It’s already being tried in 10 other states. Massachusetts has 15 projects under way with two set to come online in June. Shared solar advocates, who are being assisted by a national effort through the nonprofit Vote Solar, cite these as well as ones in other states as a reason to forgo pilot projects and just plunge in.

“This is not anything that’s unique to Connecticut,” said Jean de Smet, chair of the Windham Energy Commission. “It’s been tried; it’s worked; let’s do it.”

‘This is not anything that’s unique to Connecticut. It’s been tried; it’s worked; let’s do it.’

De Smet, who is also a former first selectman, said Windham has a large number of Victorian homes with small roof panels unsuitable for solar. Plus, more than 55 percent of the town’s resident are renters. Landlords, she said, have little to no reason to install solar, but everyone still has to pay the fees that go toward clean energy incentives.

“It seems to me this is an issue of economic equality and economic justice,” de Smet said.

Energy Committee co-chairs Sen. Bob Duff, D-Norwalk, and Rep. Lonnie Reed, D-Branford, both said they’d prefer shared solar language that authorizes more than a pilot. To that end they have been brokering negotiations between advocates and the utilities, which have balked the most at the idea of shared solar.

“There’s a lot of grumpiness going on,” said Reed, who also said communities have been asking for these sorts of virtual clean energy systems. There are more than 5,000 residential solar systems in the state now and more than 500 commercial, industrial and municipal ones.

In something of an unusual alliance, the Department of Energy and Environmental Protection, Connecticut Light & Power and United Illuminating all opposed the shared solar legislation during hearings in early March. They cited concerns that the shared operations would essentially become unregulated utilities and that there are multiple regulatory and financial details to resolve, including how charges are determined and how the utilities are compensated for use of their transmission lines, poles and other services.

“While the circumstances that this bill seeks regulate are important and must be resolved, DEEP does not support their adoption at this time, or as proposed,” wrote then-interim Commissioner Rob Klee.

CL&P offered an updated statement as discussions have continued.

“We are particularly concerned that our entire customer base, including senior and low-income customers, would end up unfairly subsidizing those who choose the solar subscription option,” it read. “We believe that before this proposed legislation comes up for consideration, the issue of cost impacts to all customers must be addressed.”

'We can’t do it in a way that shifts costs to consumers who aren’t part of the program,' said Norwalk Sen. Bob Duff.

While some viewed the utilities’ positions as nothing more than tactics designed to delay an inevitable change in how electricity is generated and distributed from large grids to smaller systems, Duff said he understands the concerns.

“We can’t do it in a way that shifts costs to consumers who aren’t part of the program,” he said.

And despite assertions from shared solar-advocates, simply grabbing an existing shared solar model as a template for Connecticut is not likely to work either.

“There has not been a consistent thread that has really come up through the states,” said Paul Spencer.

He ought to know. He’s president of the Clean Energy Collective, based in Colorado, the largest shared solar developer in the country. In the last five years he’s handled more than 40 projects in seven states across 18 different utility companies including all of the projects in Massachusetts. And he has his eye on Connecticut as a potential market.

Spencer also said the economics of shared solar will not work for just a few homes that share panels on a neighbor’s roof. Making shared solar feasible generally means more than 150 homes requiring more than 3,000 panels, which usually takes up about a hefty seven acres. While the power is virtual, states so far have generally required that the panels be in the same county or in the same electric grid zone of the homes they’re serving.

He’s seen many times what Connecticut is facing now. “The balking always comes around the money,” he said. “So it’s really deciding what is fair to both utility and the consumer.”

But he said, if the goal is reliable, clean power: “The last time I checked, the price of sunlight hasn’t gone up in a ‘gagillion’ years. It’s still free.”

Experts say the pandemic gives Connecticut an opportunity to make big advances in clean energy -- and reap the profits.