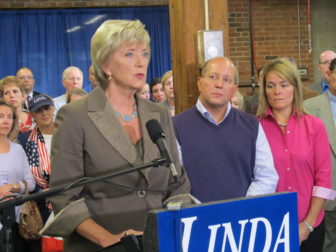 A dozen Connecticut donors gave a total of $800,000 to the Republican Governors Association in the first quarter of 2014, money the state GOP hopes will flow back to its campaign to unseat Gov. Dannel P. Malloy, a vulnerable first-term Democrat.

With individuals and corporations able to make unlimited contributions, the money came from just six individuals and six companies, led by a $250,000 check from Linda McMahon, twice the GOP nominee for U.S. Senate. A top executive at Bridgewater Associates, a hedge fund, promised $115 million in aid by Malloy, gave $25,000 to the Republicans.

Connecticut donors gave $340,000 to the Democratic Governors Association in the first quarter, but Malloy helped the group raise $1.4 million last year from donors in the state, compared with $600,000 for the Republican group in 2013.

Nationally, the GOP association, the RGA, out-raised its Democratic counterpart, the DGA, by a 2-1 margin in the first quarter, taking in $22.4 million to the Democrats’ $11.7 million. The quarterly reports were filed this week with the IRS.

Connecticut’s race for governor is one of 34 nationally, but it is expected to attract major outside spending by the DGA, RGA and other groups if it remains competitive. In the most recent public poll, Malloy and Tom Foley, his 2010 opponent and the front-runner for the GOP nomination, were tied at 42 percent.

Outside spending could be pivotal in Connecticut, where most candidates for state office participate in a voluntary system of public financing that restricts direct spending by their campaigns.

Malloy has committed to public financing, which will limit him to a general-election grant of $6 million and $250,000 in private donations, none greater than $100. But he has been raising money for the DGA and the state Democratic Party.

In the 2010 race, the DGA spent $1.78 million in support of Malloy, while the RGA spent $1.6 million helping Foley. This year, Foley’s media strategist and press spokesman have been paid by two independent-expenditure groups, including one run by his campaign treasurer.

Foley spent nearly $11 million of his own money on a 2010 campaign for governor, but he is trying to raise the $250,000 in small-dollar contributions to qualify for public financing.

It is unclear, however, if Foley will accept public financing and give up his financial advantage over Malloy and his five competitors for the GOP nomination. Foley said this week he would not say whether he would self-fund or accept the public financing until after the GOP convention in May.

Nationally, the single largest contribution to either the RGA or DGA this year was a $1 million donation to the RGA from Mike Shannon of Milwaukee, the managing director of KSL Capital Partners, and his wife, Mary Sue Shannon.

In Connecticut, the $250,000 from McMahon, a Greenwich resident and co-founder of World Wrestling Entertainment, was one of a half-dozen checks to the RGA from individual donors in Greenwich and Westport.

One of the DGA’s first-time donors last year was Alexion, a beneficiary of state economic development aid from the Malloy administration. It gave $25,000. This year, an executive of a company slated for up to $115 million in state aid contributed the same amount to the RGA.

David McCormick of Westport, the co-president of the hedge fund, Bridgewater Associates, gave $25,000 to the Republican group. No one else from Bridgewater, including its billionaire founder, Ray Dalio, worth an estimated $14 billion by Forbes, gave to either group.

The other RGA donors:

Major corporate donors tend to give to both groups.

Boehringer Ingelheim, an international pharmaceutical company with a U.S. headquarters in Ridgefield, gave $40,000 to both associations. United Technologies Corp. gave $25,000 to both.

The biggest state donor to both associations in 2013 was Aetna. The Hartford-based insurer gave $300,000 to the DGA and RGA in December, when Malloy hosted a DGA conference in Hartford.

The DGA based a consultant, Angel Combs, who formerly was the campaign finance chief for Gov. Bev Perdue of North Carolina, in Hartford in October, paying him $47,379 in the last three months of 2013 and $30,000 in the first three months of this year.