Access Health CT, the state’s health insurance exchange, drew national praise for its performance in enrolling more than 208,000 individuals in health care coverage as part of the law commonly known as Obamacare.

But the small business side of the state’s exchange — known as SHOP, for the Small Business Health Options Program — hasn’t done so well.

“When I’m characterizing the SHOP process as a mess, I’m probably being kind,” said Kevin Galvin, who owns a Hartford commercial maintenance firm and serves on an advisory committee for the small business exchange.

“The product’s too expensive,” he added. “The process is too complicated, and it needs to be completely revamped.”

What went wrong? According to people involved in the exchange, insurance and small businesses, the small business exchange’s lagging performance stems from both missteps by the exchange and challenges and competition in the state’s small-group insurance market. Connecticut’s SHOP is also far from alone in struggling to attract clients.

“Are we relying on this for huge growth into next year? No,” Counihan said of the small-business exchange. “Do I think there’s a market for it? Sure. How big is it? I’m not exactly sure yet.”

What accounts for the low enrollment in Connecticut’s small business exchange?

For one thing, many small businesses haven’t been in the market for new coverage yet.

Last fall, with new insurance regulations and pricing rules looming, many insurance brokers urged their clients to renew their existing plans early, allowing them to get another 12 months of coverage through a plan they were used to.

“A lot of businesses are dealing with all of the uncertainty, they don’t know what the best option is, what prices are going to be, so many of them have just been frozen and said, ‘You know what, I’m sticking with my current plan,’” said Andrew Markowski, Connecticut state director of the National Federation of Independent Business.

But for those who were in the market, Markowski said, SHOP’s appeal was limited because its rates weren’t great compared to plans sold outside the exchange.

Many small businesses get their insurance through agents or brokers, many of whom use software that allows them to present multiple plan options to clients at once. But the SHOP exchange doesn’t use the same software, making it harder for agents and brokers to show SHOP plans to clients alongside other options, said John Calkins, president of the Watertown benefits firm Bozzuto Associates.

And Calkins said the exchange hadn’t taken full advantage of its biggest edge: Tax credits available to some businesses that buy coverage through SHOP.

The exchange didn’t provide a tool to calculate a company’s potential tax savings, leaving insurance agents to tell clients they could potentially get a tax break, but they’d have to talk to their accountants to find out how much, Calkins said.

Another challenge: In a high-income state like Connecticut, many businesses won’t qualify for the tax savings, which are available to employers with fewer than 25 workers and an average salary of $50,000 or less.

Dean Aita, president of Aita Financial Group in Washington Depot, is licensed to sell SHOP plans to his clients, but so far, none have bought one. That’s partly because many renewed their old policies last fall.

But when it comes time to pick a new plan, Aita said, there’s another potential catch: The exchange plans offered by Anthem Blue Cross and Blue Shield, the state’s largest insurer, don’t cover all the providers that the plans the company sells outside the exchange do. 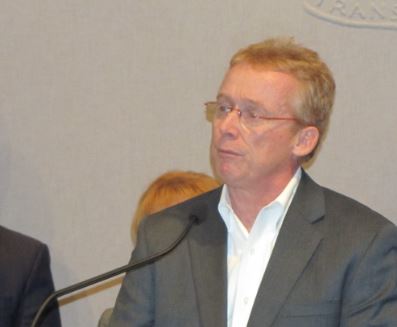 Kevin Galvin hoped health reform would make it possible for him to offer insurance to his employees. So far, it hasn't.

Galvin thinks SHOP wasn’t adequately marketed. He recently spoke to about 60 in-person assisters — Obamacare outreach workers who signed people up for coverage through the individual exchange — when a woman in the audience became visibly angry. She explained that she’d had a business for 20 years but had to give up the insurance and send workers to the individual exchange.

“She said, ‘I’m an in-person assister, and I didn’t know there was SHOP’,” Galvin said. “That pretty much tells the story of how ill-informed our market is.”

Galvin got involved in pushing for health reform several years ago because he wanted to be able to afford health insurance for his employees. But he still can’t. Instead, he advised his workers to buy insurance on the individual exchange, and he plans to help cover the premium costs of those who earn too much to qualify for government subsidies.

“It is unlikely that many small employers in Connecticut will be attracted to the Exchange,” consultants at the firm Mercer wrote in a 2012 report for the exchange’s board.

Their reasoning: Small employers are very price sensitive, but state and federal insurance regulations would make it hard for the exchange “to have a meaningful impact upon premiums.” Any plans sold in the exchange must also be offered outside of it, limiting the need for employers to use the exchange.

And, the consultants noted, the state already has a private exchange for small employers to buy coverage, run by the Connecticut Business & Industry Association.

CBIA Vice President Ken Comeau, who works on its exchange, said he was “probably not in the best position to comment” on how the SHOP exchange was doing. But he said he wasn’t surprised that Access Health’s success came in the individual market.

CBIA doesn’t release its exchange membership numbers, but Comeau said there’s been an uptick since Jan. 1. (The 2012 Mercer report said CBIA’s exchange had more than 75,000 members.)

In Connecticut, 78,713 people signed up for private insurance through Access Health’s individual exchange. (Another 129,588 enrolled in Medicaid.)

The federal government’s SHOP exchange launched last fall but without the option of signing up online, and an official with the Centers for Medicare and Medicaid services said initial enrollment figures in the federally run SHOP exchanges are expected to be modest.

Unlike the individual exchange, which had a March 31 enrollment deadline, SHOP exchanges allow businesses to sign up at any point in the year.

Norwalk attorney Stephen Keogh saw the opening of the SHOP exchange last fall as a chance to get a good insurance policy at a lower cost for his small firm. In the past, he’d been frustrated when he’d considered changing plans because it was difficult to compare those offered by different companies. The exchange requires insurers to offer plans with standardized designs, so it’s easier to compare options.

After speaking to exchange staff, Keogh got a referral to a broker and, ultimately, a new plan.

But it’s not one the exchange sells. Instead, he chose a plan offered by the same company that offered his previous plan. That way, no one would need to change doctors. The new plan costs between 15 percent and 20 percent less, he said.

“Even though I didn’t end up buying through the exchange, it was a helpful entre into the whole health insurance shopping process,” he said. “I’m glad it’s going to be there.”