Three days to go, with 296 bills awaiting a final vote 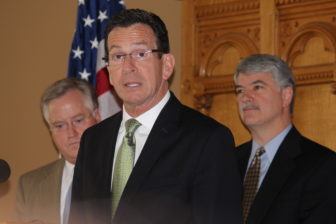 The Connecticut General Assembly began the final three days of its 2014 session Monday with 56 bills already passed and sent to the governor – and 296, five times as many, awaiting final action in one chamber after winning passage in the other.

The best route to final passage is a deal among top legislative leaders of both parties for little or no debate or, even better, a place on a bipartisan “aircraft carrier,” one of the bills with must-pass provisions that are amended to carry the substance of other legislation.

Now that the state budget framework for the next fiscal year is set – final passage of the budget came early Sunday in the Senate, though a fiscal implementer bill still awaits action – legislators will focus on who’s ready to deal. With time short, the GOP minority enjoys an effective veto by extending debates.

One of the bills sitting on the Senate calendar is a priority of Gov. Dannel P. Malloy. New financial reporting rules on nursing homes that were proposed by Malloy at the request of a union ally, SEIU 1199 New England, were approved by the House on an 86-57 vote Tuesday after an eight-hour debate.

Hundreds others have passed neither chamber, most given up for dead. Some will get by on their merits, other will be exchanged as hostages, and many, many, many will expire at the constitutional adjournment deadline: Wednesday, at the stroke of midnight.

Final action on all but one of the 56 bills to clear both chambers has come in just the past 10 days. The exception is the minimum-wage increase, passed on March 26 and signed immediately by Malloy.

One of the higher profile bills to pass neither chamber is a measure that would regulate the purchase of nonprofit hospitals by for-profit companies. No bill will be brought to a vote with a negotiated agreement, and none appears close.

A compact committing Connecticut to a movement to base presidential elections on the national popular vote never came to a vote in either chamber, as was the case with a bill to require bonus pay for retail employees forced to work on holidays, a measure to regulate the disposal of waste generated by out-of-state fracking and one of the governor’s bills.

A proposal by the Malloy administration to streamline the regulatory process would diminish the legislature’s role in reviewing regulations, never a popular concept among lawmakers.

A labor bill that cleared the committee process, only to languish on the House calendar, would bar companies from seeking state economic assistance if any of their top executives are paid more than 50 times the average salary of the rest of the workforce.

An outcry over the prospect of $100,000 judicial pensions at age 70, no matter how few years of state service, has produced no action. The Senate leadership is sitting on a proposal to proportionally reduce the pensions of judges who serve less than 10 years.

Also awaiting action in the Senate is a House bill that would ban employers and employment agencies from discriminating against the unemployed in help-wanted ads.

The tree-trimming, cemetery and property-tax bills are on the personal wish list of House Speaker J. Brendan Sharkey. Passage of some or all of those measures in the Senate may ease the way for final approve of some Senate bills in the House.

Awaiting action in the House is a priority of Malloy, legislative leaders and consumer groups: A bill offering consumer protections in dealings with electric retailers. It passed the Senate unanimously.

AARP, Connecticut Citizen Action Group, ConnPIRG and the Legal Assistance Resource Center say the bill was too deferential to the interests of electric retailers in that it failed to cap variable rates. They have been lobbying House members to make changes.