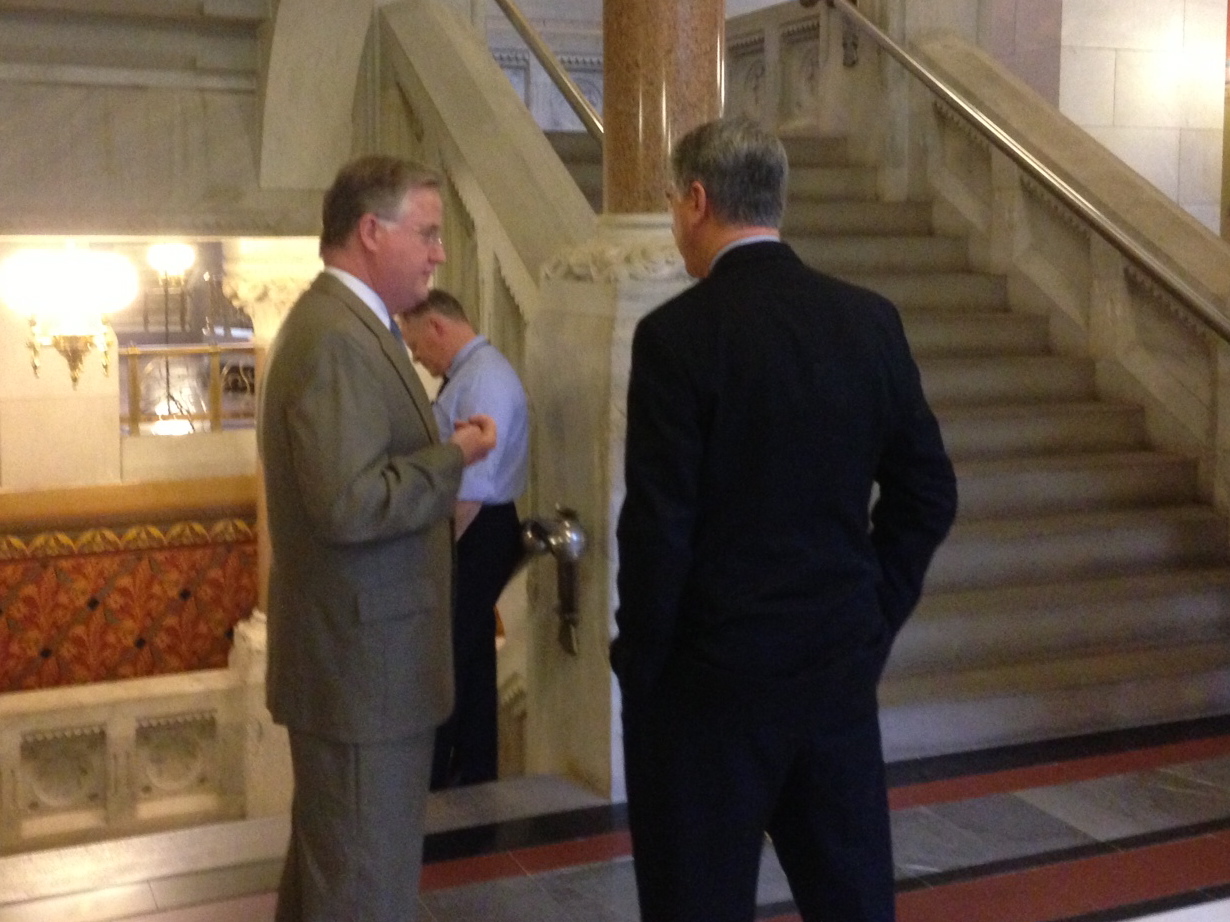 House Speaker J. Brendan Sharkey, D-Hamden, made a last-ditch effort Wednesday to pass a compromise version of his bill to limit the property-tax exemption for nonprofit institutions, but it died amid an ice-cold reception from senators and red-hot opposition from colleges.

Senate President Pro Tem Donald E. Williams Jr., D-Brooklyn, told him that a compromise acceptable to him was rejected by his Senate Democratic caucus, some of whose members still were mindful of a public insult inflicted on Williams by Sharkey and House members.

On the last day of the session, when the senators staged a long tribute to the retiring Williams, the House speaker was finding favors hard to come by in the Senate.

Sen. Ed Meyer, D-Guilford, perhaps the bluntest member of the Senate, shared during his tribute to Williams that many members of the Senate majority wanted Williams to call Sharkey’s bill for a vote — only to quickly kill it.

The gesture would have been tit for tat, payback on a House vote Sharkey called to kill one of Williams’ pet bills, a ban on the sale and use of genetically modified grass seed. Meyer said Williams declined to take the slap at Sharkey, refusing to call a bill only to kill it.

“Our leader had the good judgment and integrity to say to us that’s not the direction we’re going to go,” Meyer said.

The speaker, who has focused this year on the growing volume of property private colleges, universities and hospitals are removing from local tax rolls, said he still hoped to pass a compromise before the annual session adjourned at midnight.

“I think they are missing the voice of the average taxpayer, the average family in this state, who is saying, ‘Enough is enough. We expect some fairness,’ ” Sharkey told The Mirror early Wednesday afternoon.

Sharkey has spent much of the past three months arguing that Connecticut’s longstanding property tax exemption for major nonprofits is breaking the fiscal backs of cities and towns.

The state partially reimburses municipalities for tax-exempt property. But the $115 million in PILOT, or payments in lieu of taxes, covered just 32 cents for every property-tax dollar municipalities lose.

Sharkey originally proposed ending the tax exemption for major nonprofits, and then allowing hospitals, colleges and hospitals to apply for state grants to offset some of that new burden.

When it became clear that measure wouldn’t pass in the Democratic-controlled Senate, the House approved a scaled-back bill that attacks the problem prospectively: Nonprofits would owe local taxes only on properties purchased after July 1.

As that plan also bogged down in the Senate, Sharkey, Williams and Malloy administration representatives crafted one final compromise this week.

Nonprofit colleges and universities would pay local taxes on new property purchased after July 1, 2015, only if:

Hospitals would not be affected at all in this final version of the bill.

The House adopted the measure 141-4 shortly after 8:45 p.m. and transferred the bill to the Senate, where it languished on the calendar until the midnight deadline.

Sharkey rejected any comparison between his proposal and Williams’ grass-seed bill.

“I had to do some heavy lifting,” Sharkey said. “I worked very hard with him.”

Sharkey, who is pledging to lead a landmark debate in 2015 over the state’s property tax system and reforms necessary to ease the burden on local homeowners and businesses, said some evidence of a new direction needs to be demonstrated now.

“People are expecting something to occur,” the speaker said, adding he’s dismayed that Senate Democrats don’t recognize the hefty burden these major institutions are placing on communities. “I was somewhat dumbfounded by that.”

But when the smoke cleared after the midnight deadline, Williams said “there was hardly any support for (Sharkey’s proposal) at all” among Senate Democrats. “People were not thrilled with signing onto the idea of taxing nonprofits.”