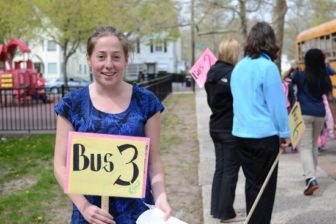 Teacher Julie Bergeron plans to reapply for her job and possibly earn a bonus.

Teachers have until May 16 to decide whether they want to stay at one of New Haven’s most challenging schools as it enters its next chapter—with a new twist on how to rebuild.

Teachers got that word in a staff meeting Wednesday at Lincoln-Bassett School, a struggling neighborhood school serving 355 students in grades pre-K to 6 in Newhallville.

The meeting came on the heels of a unanimous vote by the state Board of Education Wednesday to approve a new turnaround plan at the school. Lincoln-Bassett was one of five schools Wednesday to join the state Commissioner’s Network of failing schools to receive extra state money, support and oversight in exchange for agreeing to an overhaul.

Click here to read the plan for Lincoln-Bassett. The plan includes a new twist on ideas for how to go about changing the roster of teachers at schools undergoing overhauls: Teachers don’t have to reapply for their jobs in order to keep them, but they can earn a bonus if they do.

The plan also fulfills Mayor Toni Harp’s campaign promise of experimenting with an early-morning-until-evening schedule at the school to correspond to new realities about parents’ schedules.

Teachers union President Dave Cicarella explained the plan to teachers in a staff meeting Wednesday. Teachers asked questions about who would be leading the school, when they’d find out if they can keep their jobs, and how much money they would make, Cicarella said.

“I’m still in limbo” about whether to stay, 5th-grade teacher Rich Fazzouli said after the meeting. He said teachers are weighing personal decisions: Fazzouli, for example, makes an hour-long commute to the school.

Fazzouli, the teachers union representative at the school, sat on the committee that came up with the plan. He said he supports the proposal: “The status quo needs to change.” He said he wasn’t sure yet how many teachers would stay or go.

The development marks the next step forward in an improvement plan that’s been in the works for over a year. The district last year hired a new principal, Yolanda Jones-Generette, to replace longtime Principal Ramona Gattison and address years of educational neglect. Lincoln-Bassett has been on a “support plan” in recent weeks, after a blistering state audit there revealed concerns about kids’ behavior, teacher attendance, student safety, and a “low level of rigor” in the classrooms.

The turnaround plan was drafted by a committee that included parent, teacher, staff, city, state and union representation. It calls for changes in teacher work rules, which teachers can decided to abide by—or leave behind and transfer to another school.

Teachers have until May 16 to decide whether to stick with the school as it goes through the following proposed changes:

Longer school day. Teachers must show up 50 minutes early, at 7:30 a.m., five days a week. Four of those mornings will be for teacher collaboration, the fifth for solo teacher prep time.

More student time. Students will be offered optional before-school and after-school programming, adding an extra five hours to their day. If families want to, they can send their kids to Lincoln-Bassett from 7:30 a.m. to 6:30 p.m.—a key change promoted by Mayor Harp. Teachers will be invited but not required to teach in the after-school program. Students who don’t do well will be sent to mandatory summer school.

Teacher evaluations. Teachers who stay will face new consequences for job evaluations. Those who score “developing,” a 2 on a 5-point scale, at the end of next school year, may be transferred to other schools. Those who score a “1” or “needs improvement” may be fired, which is true across the district. That goes for tenured and non-tenured teachers. Those who earn high ratings, a 4 or 5 on the scale, will be allowed to apply for new leadership positions in the school. The consequences coincide with a vow to better implement the evaluation system: Under the previous principal, the evaluations were implemented so inconsistently that the scores cannot be relied on, a state audit concluded.

Coaching. Teachers may receive “intensive and job-embedded coaching” through a state-approved outside agency.

Higher expectations. Teachers will be held accountable to new expectations, including using data to drive their instruction and maintaining a daily lesson plan, which will be collected and reviewed by administrators. They will be asked to “maintain a professional and collegial relationship with all staff and families”—something that is not currently happening, according to the state audit.

New administrators. The plan calls for hiring two new administrators—a dean of students and a director of school operations—to oversee the school along with an assistant principal and the principal.

Teachers at other turnaround schools have been through versions of these changes since 2010, when the district launched its first “turnaround” effort at Katherine Brennan School.

The Lincoln-Bassett version offers a new twist on New Haven’s style of school turnarounds: Unlike at other turnaround schools, teachers at Lincoln-Bassett won’t technically have to reapply for their jobs. They can stay if they want to. But they’ll get a $5,000 signing bonus only if they agree to go through a reapplication process.

Here’s how it works: Teachers who want a $5,000 signing bonus can reapply for their jobs. If they pass an interview with the principal—and commit to staying at the school for three years—they’ll get the bonus. But they’ll stand the risk of being transferred out if the principal doesn’t want them there. The district will also offer a $5,000 bonus to teachers who join the school.

The new $5,000 bonus comes thanks to a $53 million federal Teacher Incentive Fund grant and a new teachers contract, which allow the district to offer different pay for teachers who work in hard-to-serve schools.

New Haven teachers union President Cicarella has spoken out against creating more turnaround schools, in part because they are disruptive to adults and kids, displace low-performing teachers to other schools, and have not yet been proven to work in New Haven.

Cicarella said he supports the plan at Lincoln-Bassett because it is “not as disruptive as our turnaround plans.”

The Lincoln-Bassett plan offers a new way to allow the principal to replace the staff she does not see as a good fit for the school. Since taking over the school last summer, Jones-Generette has faced resistance from about half of the staff. The state audit described a bitter division in the staff that is holding back the school from making progress.

Jones-Generette did not respond to a request for comment left at the school Wednesday. She has declined to comment for previous stories on her school.

To Stay Or Go?

Several teachers interviewed at school dismissal time Wednesday said they had not yet decided whether to stay on at the school.

“I’m on the fence,” said teacher Alex Oji (pictured), an outspoken critic of the school’s new administration. He said he needed to learn more about the changes in store.

Julie Bergeron (pictured at the top of this story) said she does hope to stay.

Bergeron, of Wallingford, just started at the school in November. She said she’s looking forward to new resources: She currently has only a small white board, the size of her bus-duty yard-stick, to write on in her classroom.

She’s also hoping for an end to a divisive adult culture at the school. Bergeron said she began her stint at Lincoln-Bassett feeling chipper. She grew up in Waterbury, in and out of foster care, and said she can relate to the experiences of some of the kids. She wants to work there. But she has been feeling “beat down” by the adult culture. There are “cliques” of staff members who don’t get along. Some coworkers have stopped greeting her when she arrives at school in the morning.

“I see the war, and it’s not a positive environment,” Bergeron said. “The kids pick up on that” division—“I’m sure they do.”

“It’s sad when good teachers get beat down and they don’t feel it’s worth it” to invest in the school, she said.

Bergeron said she can envision the school improving in a few years, when it has more support, more resources, and a “friendly atmosphere.”

One mom, who gave her name as Yonnette, agreed. Yonnette arrived Wednesday with her 4-year-old, Nahnah (pictured) to pick up her 1st-grade student. She said she hadn’t heard about the changes in store for her school, but she would support smaller class sizes.

“The less kids, the better,” she opined. “When the kids get together, they don’t know how to act. Kids in Hamden—they learning more there.”

Yonnette said she plans to keep her two kids in the school—and enroll her 4-year-old there next year for the next chapter.

Another parent, who gave her name only as Brittany, wasn’t so hopeful.

“I don’t like the school, period,” she said. “I don’t feel like my kids is learning anything.” She has two kids, ages 7 and 10. She said they have stalled out on their reading. In order to get extra help, she had to send one of her kids to an outside agency, New Haven Reads.

Brittany said she feels some of the teachers are good, but “some of them—I don’t think they can handle the kids. … they’re quick to suspend the child” instead of offering help.

Plans for the school include creating a “restorative justice room” that would seek to address the harm a child has inflicted instead of just issuing punishment; and “re-establishing” the Comer School Development Program, in which adults in the school work in teams to address the social and emotional development of kids.

Brittany said her kids are currently on waiting lists to get into Achievement First charter schools as well as Wintergreen Interdistrict Magnet School in Hamden.

Lincoln-Bassett is the third city school to join the Commissioner’s Network. The other two—High School in the Community and Wilbur Cross High—have joined the network, which serves 7,000 kids in 11 schools. Combined, the two New Haven schools are receiving an extra $1.4 million this year to support improvement plans.

State education department spokeswoman Kelly Donnelly said the state has not yet determined how much money the school would get.

Read this story and others at the New Haven Independent.