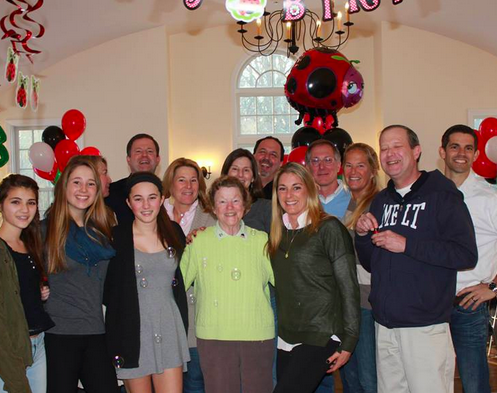 Lucie C. McKinney, center, at her 80th birthday in February.

Lucie C. McKinney of Westport, a blunt and strong-willed activist and philanthropist best-known to the public as the daughter of a famous sportsman, widow of a congressman and mother of a state Senate leader, died Saturday of complications from cancer. She was 80.

Mrs. McKinney was married to Stewart B. McKinney, the 4th District congressman who died in 1987 of AIDS, a cause of death from which she never shied. Her father, Briggs Cunningham II, was a Le Mans race-car driver and a victorious America’s Cup skipper in the 1950s.

One of her five children is Senate Minority Leader John P. McKinney, R-Fairfield, a candidate for the Republican nomination for governor. His name will be placed in nomination at the GOP convention next weekend.

As the scion of a co-founder of Standard Oil, Mrs. McKinney was a daughter of privilege, yet unafraid to mix it up in politics or public policy.

In 1982, she publicly cussed out a political opponent who had the temerity to suggest that her husband, a man of modest means, was too rich and too out of touch to represent a congressional district that included struggling Bridgeport, as well as some of the nation’s wealthiest zip codes.

“It’s not his money, it’s mine!” Mrs. McKinney shouted, according to her son, John, who added that complete quote contained an expletive. He laughed Sunday retelling the incident, then softly said, “She was fiercely loyal.”

That never was more apparent than after her husband’s death in 1987, early in the AIDS epidemic. Rather than avoid mention of illness that killed her husband, Mrs. McKinney became an AIDS activist.

“She was unafraid to speak out on behalf of people with AIDS,” McKinney said. “She was a force.”

Mrs. McKinney’s family organized a surprise 80th birthday party in February. On the eve of her birthday, she posted the results of a “mental age” test on her facebook page: “my mental age is 38 and I will be 80 tomorrow !!”

Decorations at the party reflected her fondness of lady bugs.

Her son said she was diagnosed soon after with an aggressive form of cancer. She had been under hospice care at her home.

A memorial service will be held May 20 at St. Timothy’s Episcopal Church in Fairfield, which was built on land donated by Lucie and Stewart McKinney.