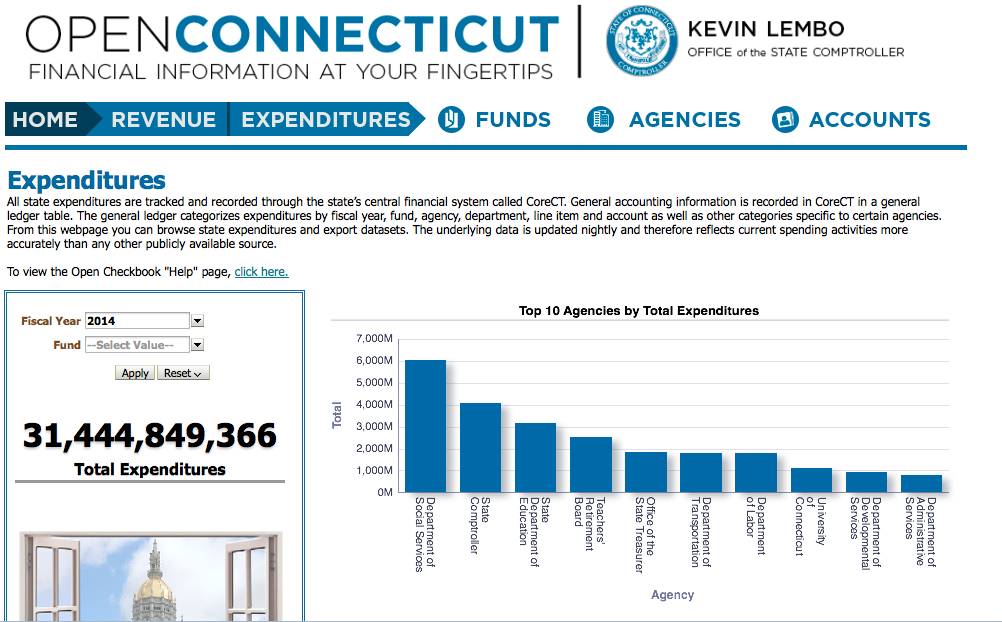 There are several state websites that provide visitors once a year with data – usually old information – about government spending and revenues.

But state Comptroller Kevin P. Lembo announced the re-launch Tuesday of a site that will provide updated details daily on the money coming into – and going out of – the state’s coffers.

“Open Connecticut 2.0 holds true to a promise that open government is always a work in progress, with no finish line, that we will continue to build upon,” said Lembo, who announced the re-launch during a late morning press conference in the Legislative Office Building.

Visitors now can see what Connecticut has received from various taxes – income, sales corporation and other – over the past six years, and also how tax receipts are coming in throughout the current budget year.

The same holds true for spending. As the state’s chief fiscal watchdog, the comptroller’s office processes vouchers from various state departments and agencies as they spend state funds on grants, services, equipment and other purposes. As those vouchers are received, Lembo’s office will post them on the new site, allowing viewers to track spending on a day-by-day basis.

Another new feature of the site allows visitors to export data, choosing from various formats for downloads. Lembo said he hopes that will make the site popular with journalists, academics and other researchers, but quickly added that the site’s value involves more than just its potential use.

“The fact that it’s there, the fact that folks can get to it if they choose” is important to promote transparency in government,” he said, adding it should complement other recent efforts to share state financial data.

After nearly a year of lobbying by Lembo, Gov Dannel P. Malloy signed an executive order last December implementing a Lembo initiative and creating a searchable website detailing who has benefited from about $500 million in direct economic aid granted over the past three years.

“I think we can safely say Connecticut has really moved the ball in the last four years” in transparency, he added.