Connecticut Democrats poured into their state convention Friday, pledging that whatever it lacked in drama it would make up for in passion.

The more than 1,800 delegates at the Connecticut Convention Center in Hartford re-nominated Gov. Dannel P. Malloy, who vowed to battle energetically for a second term.

And Malloy, who has taken some heat over a sluggish economy and ongoing deficit projections for state finances, said that while there is more work to do, he would celebrate a track record filled with successes.

‘We made the tough choices’

Malloy, entered the stage with Tom Petty’s “I Won’t Back Down” blaring throughout the hall, touted his efforts to grow jobs, to improve conditions for labor, to reform health care and state finances, and to control gun violence in the wake of the December 2012 shooting tragedy at Sandy Hook Elementary School in Newtown.

“We made the tough choices that helped turn our state around,” the governor said in a 16-minute address, noting that his Republican counterparts in other states slashed education, blocked minimum wage increases, and “in Georgia, you can now bring a gun into an airport, a church and even a school.”

Malloy, who is known for his assertive – and at times prickly – personality, tried to make the most of it Friday, reminding his audience again that he inherited the largest budget deficit in state history, a problem that led to major tax hikes, union concessions and spending cuts.

“Yes, it’s true that some of these decisions didn’t make me the most popular guy in every room, but you know what? We made them anyway, because they were the right thing to do,” he said.

And despite those tax hikes, the Malloy administration increased aid to cities and towns while making new investments in early childhood education.

We invest in the potential of our children,” the governor said. “We trust in the incredible ability of our teachers. Because, we Democrats know that you don’t steal from our children’s future and pretend that it’s good for our economy.”

Malloy, who this year secured a two-stage increase to push Connecticut’s minimum wage to $10.10 per hour, noted that while some Republicans attacked the move as a hindrance to business growth, “I call it a badge of honor.”

The governor also noted that he signed a major tax credit for Connecticut’s working poor into law three years ago.

“It’s about respecting workers, valuing hard work and giving people the opportunity for a better life,” he said. “You put that together with our increases in the minimum wage and we’ll move tens of thousands of Connecticut families out of poverty and into the middle class.”

And while other states have struggled to successfully implement federal health care reform, commonly known as “Obamacare,” the governor said In Connecticut, “we created a (health care) exchange that works so well that other states are calling and asking us how we did it. … And as a result, more than 208,000 people in Connecticut signed up for quality, affordable health care.”

Taking aim at the GOP

Though Malloy has been locked in Quinnipiac University polls in a dead heat with GOP frontrunner Tom Foley – the Greenwich businessman he narrowly beat in 2010 – he closed his speech challenging the GOP to contest his record.

“The Republicans will tell you to forget everything you’ve seen and everything you know,” Malloy said. “They will say that everything in this state is going horribly wrong. They’ll blame me for everything but the weather and, you know what, come to think of it, they’ll probably  blame me for the storms too.”

But, in a reference to Republican gubernatorial contenders pledges to deliver big tax cuts if re-elected, Malloy predicted voters would see through promises “as absurd as they are false.”

Those promises only could be kept by imposing huge cuts to town aid, education and health care, the governor added.

“I stand here today as a proud member of this Connecticut Democratic family,” Wyman said. “A family that believes that we don’t back down to barriers. We break through them. We don’t shy away from our toughest challenges. We meet them head-on.”

Wyman added that this family “also believes that we don’t walk away from our friends and we don’t abandon our principles, we stand with our allies. And we lead with our values. Values that say that we cherish our children, we respect our teachers and we build our future-together.”

The convention also re-nominated the party’s successful 2010 under-ticket, four incumbents who mixed appeals for Democratic unity with occasional jabs at the Republicans.

“We believe in more voter participation, not less,” said Secretary of the State Denise W. Merrill of Hartford, who is seeking her second term.

Merrill noted how she, Malloy and the Democratic majority in Hartford have worked successfully over the last four years to legalize Election Day and online voter registration, bringing several thousand more residents to the polls last fall.

Nappier, who lives in Hartford and is seeking her fifth term, noted that Malloy and other Democrats launched a major initiative two years ago to bolster the state employees’ cash –starved pension fund.

“That, my fellow Democrats, has not been the case under previous Republican administrations, costing us billions of dollars in lost investment opportunities,” she said.

Comptroller Kevin P. Lembo, a Guilford Democrat who sometimes has challenged the administration efforts to achieve fiscal balance and transparency, reaffirmed his values while giving a nod to the administration.

“I committed that I would be a clear and straight-talker,” he said. “Transparency must be a fundamental value in state government. And I am proud to say that, under Governor Malloy, Connecticut is closer to reflecting that value that it was four years ago.”

Jepsen described himself as “a former union lawyer who, as attorney general, has not forgotten where I’ve come from.”

Delegates entering Friday’s convention also mirrored Malloy’s mood, pledging to wage an enthusiastic campaign, regardless of the lack of competition for the party nominations.

“We are here to celebrate a governor who has done a lot over the last three-and-a-half years to move this state forward,” said Michael Pohl, Manchester’s Democratic town chairman. 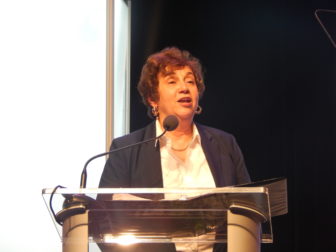 “Governor Malloy’s policies have created private sector jobs, more than 50,000 of them,” she said, noting that the state unemployment rate just fell below 7 percent for the first time in almost six years. “That’s real progress.”

State Rep. Patricia Widlitz of Guilford, one of the Democratic Party’s fiscal moderates, said that while Connecticut has invested big dollars in business development under Malloy, they have been shrewd choices, pumping dollars into bioscience, engineering and other growing sectors of the economy.

“I think it’s very clear we have made a significant difference in moving in the right direction,” she said. “We have a proactive governor who is following a clear vision he has for this state.”

Democratic candidates in general – and Malloy and Wyman in particular – benefited heavily four years ago from strong support, both at the polls and on the campaign trail, from public- and private-sector unions.

And while Malloy has bumped heads with unions representing state employees and public school teachers, Democrats were optimistic Friday that labor would play a vital role in the 2014 state races.

At a debate among GOP gubernatorial contenders in Stamford, four pledged to seek further concessions from state employees – making it the third round of worker givebacks in seven years – if elected.

Malloy reached a major concessions agreement with state employee unions three years ago, and did so through a respectful process that included labor proposals, Pelletier said.

“We will get our members kicked up when we compare and contrast the issues,” Lori Pelletier, who heads the Connecticut AFL-CIO, said. “People are motivated and will come to the right conclusion.”