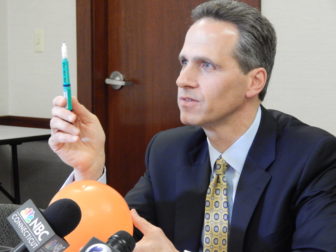 Derby — Griffin Hospital officials said Friday that the misuse of insulin injection devices could have exposed up to 3,149 hospitalized patients to blood-borne diseases during a nearly six-year period.

The hospital is notifying patients who received insulin through the injector devices from September 2008 through last week. Officials said they had not received any reports of disease transmission and believed the likelihood of transmission to be very low.

The devices, known as FlexPens, each contain a cartridge with multiple insulin doses. They’re intended to be used on a single patient. But hospital officials said in some cases, the cartridges have been used on multiple patients, with different needles. In those cases, the risk of disease transmission comes from the possibility of blood from the patient flowing back into the insulin cartridge, then being transmitted to the other patient through the insulin.

Griffin Hospital CEO Patrick Charmel said five nurses had either used a single FlexPen on multiple patients or observed someone else doing so.

The hospital plans to notify the 3,149 patients so they can be tested for HIV, hepatitis B and hepatitis C. Officials said they believe the likelihood of infection from the devices is very small. But they said that because of the prevalence of hepatitis C in the population, it’s likely that some patients will test positive and that it won’t be clear what the source was.

The hospital will cover the cost of testing for all patients and the cost of treatment for any who test positive, Charmel said during a press conference.

The Connecticut Department of Public Health is investigating Griffin Hospital and sent health care providers in the state information about the proper use of insulin pens.

“Protection from infections, including blood borne pathogens, is a basic expectation anywhere health care is provided,” health department spokesman William Gerrish said. “According to the [Centers for Disease Control and Prevention], use of insulin pens for more than one person imposes unacceptable risk and should never happen.”

The issue was uncovered after a nurse saw a media report and asked a hospital pharmacist about whether the insulin pens were used on multiple patients. The director of pharmacy mentioned the question during a safety huddle — daily meetings with top staff to discuss issues related to patient safety — last Wednesday, which prompted officials to investigate.

Misuse of the devices has occurred at hospitals in other states, and Charmel said it’s likely still happening elsewhere.

On Friday, the Connecticut Hospital Association asked all hospitals to look into their organizations’ use of the pens and whether they might be misused. Dr. Mary Cooper, the association’s vice president and chief quality officer, said Friday afternoon that the association hadn’t yet heard anything back.

“The research that we’ve done indicates there is probably no way to prevent misuse of this, and therefore we’ve eliminated use of these injectors in the hospital,” Charmel said.

Charmel noted that the boxes the devices come in are marked for single patient use, but the individual injectors are not. Before getting alternative supplies so they could stop using the insulin pens, Griffin Hospital added labels to each device last week.

“Nurses are taught that they’re only supposed to be used for a single use, but the fact of the matter is staff may think of this more as a multidose vial than a single-use device,” Charmel said. “Frankly, it shouldn’t have happened, but it did. And we feel that there’s a possibility that it can happen elsewhere and that’s why we’re making the fact that it occurred here public.”

Other cases of device misuse

The FlexPen is made by the pharmaceutical company Novo Nordisk. Charmel said the hospital began using it in 2008 because it was considered a safer way to deliver insulin than previous methods.

Federal agencies have issued alerts to remind medical providers never to use insulin pens in more than one person, a response to reports of improper use. The Food and Drug Administration issued an alert in 2009, but the Centers for Disease Control and Prevention said there have been “continuing reports of patients placed at risk through inappropriate reuse and sharing of insulin pens.”

A spokesman for Novo Nordisk, Michael Bachner, said the company stands by the device as safe and effective in all settings, and said the package insert indicates that it should only be used for one patient.

Patients who use FlexPens at home should know that there are no quality or contamination issues with the device itself, Bachner added.

Asked what would happen to the nurses that misused the devices, Charmel said he understood the public would likely call for strong punishment, and he said there will be counseling and disciplinary action. But he said being punitive could backfire.

“If we’re punitive in response to situations that may cause harm, they’re not going to be identified,” he said. “If we’re too punitive, people are not going to identify opportunities to improve safety. They’re going to be afraid to do that. So there’s a balance.”

The Connecticut Hospital Association issued a statement expressing concern for the affected patients and praising Griffin Hospital for taking responsibility for the issue. The association is leading an effort to improve patient safety at hospitals in the state.

“The climate we are trying to achieve is one in which staff are empowered to raise concerns proactively about practices that may cause risk to patients,” the statement said. “Another element of highly reliable organizations is the concept of transparency, in which we talk openly about mistakes that are made, fix them promptly, and take action to ensure they don’t happen again.”