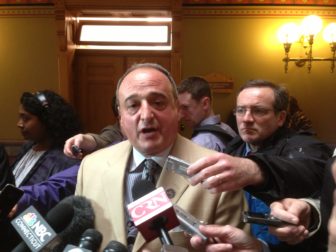 Gov. Dannel P. Malloy said Friday he’s not satisfied with one agency’s explanation about how it failed for five years to deliver – or even attempt to contact – a teacher’s pension beneficiary owed almost $200,000.

And while the Democratic governor said his office would get answers, the top Republican in the House of Representatives said it might be time for an independent review of the state Teachers’ Retirement Board.

State Auditors Robert M. Ward and John C. Geragosian notified Malloy on Thursday that they fear the board – which administers pension payments for more than 30,000 retired Connecticut teachers and their beneficiaries – has failed to contact others due money.

As part of a regular audit of retirement board operations, Ward and Geragosian’s office discovered the five-year-overdue-payment by studying a random sample of cases.

That review also disclosed that while the retirement board had been gathering extensive contact information from teachers, it only had been collecting names and Social Security Numbers for those teachers’ designated beneficiaries.

Though most of these beneficiaries involve a teacher’s spouse or other family member, the plan does not require that beneficiaries be relatives.

And while the initial sampling of cases studied by the auditors only found one beneficiary owed funds that were long overdue, the auditors wrote that due to the huge size of the pension program – which serves all public school teachers in Connecticut – “it is reasonable to believe that there are additional cases” of undelivered benefits.

“We call upon the governor to insist on tighter controls and a thorough overhaul of the tracking system to make sure that those retired teachers or their designees get what they’re owed,” Cafero said.

The minority leader added an independent forensic review may be needed. “This has been going on for years, according to the auditors, with no system in place to track who gets what,” he said.

The executive director of the retirement board, Darlene Perez, said she doesn’t believe the problem is widespread, but estimated there are one or two dozen cases of undelivered benefits worth a total of about $1.5 million. The state paid about $1.5 billion in total benefits last year to retired teachers and their beneficiaries.

Perez also said that while the agency had failed for years to collect certain contact information for retired teachers’ designated beneficiaries, it changed that practice last week.

Perez also said that “our resources are at an extreme low. Updated software certainly would help.”

But Malloy said Friday that the issue “at least begs a fuller explanation than that, so we’ll get to the bottom of that. It is important that people receive the benefits to which they’re entitled.

“It should have been done and it must be done.”