Washington – As deep problems at the Department of Veterans Affairs come to light, Congress continues to stall on key VA administrative nominees, including Linda Schwartz, named to be the agency’s assistant secretary of policy and planning.

Schwartz, 69, a Vietnam vet and former nurse who heads the Connecticut Department of Veterans Affairs, was chosen by President Obama last year for that top job at the VA. Other high-level VA nominees have also twisted in the wind for months.

Why this is so is the subject of partisan finger-pointing.

Democrats say Schwartz is the victim of a GOP slowdown on nominees. Republicans say Senate Majority Leader Harry Reid, D-Nev., preferred to move judicial nominees and other high-profile nominees, leaving Schwartz and others on the back burner.

Both stories may be a little true.

Republicans have pushed back at a majority of Obama’s nominees, leaving a huge backlog that has only begun to clear out since Reid deployed the “nuclear option” in November, meaning he changed Senate rules to enable judicial and executive nominees to be confirmed with just 51 votes instead of 60. Since Democrats have 56 votes in the Senate, it’s become nearly impossible for the GOP to block a nominee.

“As retaliation, they are making us jump through parliamentary hoops,” said a Democratic source on the Senate Veterans Affairs Committee.

But a Republican Senate staffer said Reid can bring up any nominee now, and has chosen to move judicial nominees before many others.

Reid’s office did not respond to requests for comment.

Schwartz was nominated by Obama for the job as VA assistant secretary of politics and planning in August. She sailed through a confirmation hearing in the Senate Veterans Affairs Committee on Nov. 19, 2013 — just days before Reid announced he would use the nuclear option. At the time of her confirmation hearing, the job of VA assistant secretary of politics and planning had already been vacant for almost a year.

At her confirmation hearing, Schwartz promised to “challenge the status quo.” She said she learned the value of VA medicine after sustaining injuries in an aircraft accident in 1986 while serving as an Air Force flight nurse.

“At that time VA was the only care available to me because my husband, a self-employed veteran, had no health coverage and the health plan provided by my employer would not cover the care associated with injuries incurred in the line of military duty,” she said.

That same day, Sloan Gibson, who now heads the VA since Eric Shinseki quit as the head of the department last week, also underwent a successful hearing for the position of deputy secretary.

The Senate then voted to confirm Gibson. But Schwartz, and Constance Tobias, another candidate for a top VA job – that of chairman of the Board of Veterans’ Appeals — have not had a confirmation vote in the full Senate.

Obama’s choice to be the VA’s chief financial officer, Helen Tierney, has also had a long wait for confirmation. The president named her to the job in October.

And the position of inspector general of the VA has been open for nearly six months.

It was acting VA Inspector General Richard Griffin who wrote the damning report that likely prompted Shinseki’s resignation last week. Griffin’s interim report of the IG’s investigation of the VA said agency officials manipulated medical waiting lists at one and possibly more hospitals, and as many as 1,700 patients at a VA medical center in Phoenix were not placed on the official waiting list for doctors’ appointments and may never have received care.

While the Senate has dragged its feet filling other VA vacancies, this one is the fault of the White House which has not nominated anyone to fill the job of permanent inspector general of the VA.

Whether the scandal moves the White House and Senate Democrats to move on VA nominees is unclear. 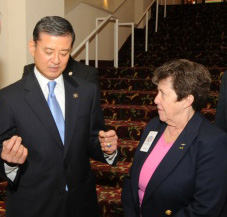 Connecticut’s Linda Schwartz, right, with Eric Shinseki, the former head of the Department of Veterans Affairs.

“Maybe this VA thing gets [Schwartz] to the top of the stack,” said the Democratic aide in the Senate Veterans Affairs Committee.

As a pending nominee, Schwartz is circumspect as to what she can say about her nomination. But she still betrays some impatience about her state of limbo.

“I am awaiting confirmation by a vote of the full Senate,” she said in a statement released Monday. “This position has been vacant since January of 2013, and I look forward to fulfilling the full intent of my nomination — assisting the VA in its mission of serving veterans and providing the Secretary with solid and thoughtful counsel.”

Schwartz has headed the Connecticut Department of Veterans Affairs for 10 years, serving under both Republican and Democratic administrations.

At her confirmation hearing, Sen. Richard Blumenthal, D-Conn., called her “a truly bipartisan official.” But the VA scandal has become a political football on Capitol Hill, with Republicans slamming vulnerable Democrats who did not call for Shinseki’s resignation.

Lawmakers of both parties, including Blumenthal, are demanding the VA make public the results of an audit of all of its medical facilities.

“This information …has been compiled and analyzed, and it must be made available to the public immediately,” Blumenthal said in a statement released Monday. “The American public, most especially our nation’s veterans, deserve and need to see these site-specific details immediately. They have a right to know now what problems have been found, who is responsible, and what will be done to remedy these serious issues. Non-disclosure does a disservice to all veterans.”

The VA has medical facilities in West Haven and Newington and outpatient clinics in Danbury, New London, Stamford, Waterbury, Willimantic and Winsted.