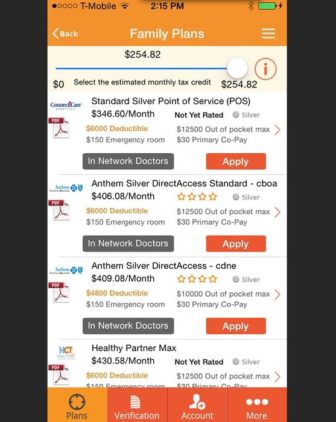 A sample page from the Access Health CT mobile app.

Access Health CT’s mobile application is available for iPhone users and will be rolling out soon for Androids and iPads, officials at Connecticut’s health insurance exchange said Thursday.

Access Health officials say the free mobile app will make it easier for people to shop for health care coverage using smart phones or tablets. Officials hope it will appeal to young people — a coveted customer pool — and to people who have smart phones but don’t have regular access to a computer.

The app allows people to shop anonymously, create accounts and view health plan options. People will also be able to upload documents through the app by taking pictures of the documents with their device’s camera.

Wadleigh said a Spanish-language version is in the early phase of development.

Without publicity, the app had been downloaded 120 times as of Thursday, and more than 400 documents had been uploaded using it, Wadleigh said.

The app will be available free to users, but exchange officials are considering selling the software to other states as a way to generate revenue. Access Health has also offered its exchange system software to other states, but doesn’t charge them because the code was developed using federal funds. The exchange used non-federal funds for the app, which was developed by Amtech Systems, a New York company.