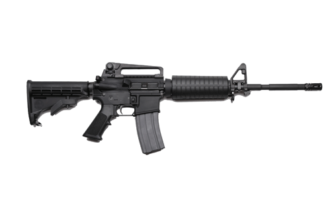 This Stag Model 1 remains legal to buy in Connecticut.

New Britain – Gov. Dannel P. Malloy drove past Mark Malkowski’s factory the other day on his way to a press conference at A-1 Machining Co., an employer chosen to receive a low-interest $1.25 million loan from the Malloy administration’s new advanced manufacturing program.

Malkowski did not expect the governor to stop.

A-1 makes parts for commercial jet engines and is poised to add to its 53-member workforce, while Malkowski makes the AR-15, a military-style rifle whose retail sale was ostensibly banned in Connecticut and New York last year, a setback that he says forced him to recently lay off 50 of his 200 employees.

“I never got the sense that Connecticut was a business-friendly state,” said Malkowski, the founder and president of Stag Arms, a company that had been growing steadily with the popularity of the hottest gun in the U.S., the AR-15. “Connecticut seems the least friendly, at least when it comes to our industry.”

But Stag remains in New Britain, turning out AR-15s on John Downey Drive, despite sales pitches to relocate out of state, including one delivered personally by Gov. Rick Perry of Texas. The company even makes a version of the AR-15 that is still legal to buy in Connecticut, though it’s less popular than the pre-ban model.

The annual report of the National Sports Shooting Foundation, an industry trade group, says that employment in firearms and ammunition companies actually increased in Connecticut in 2013 by about 200 jobs to 3,105. The industry’s economic output in the state was $1 billion, second only to California.

No estimates were available for 2014, but Malkowski said Stag Arms was not the only firearms company in Connecticut to shed jobs this year.

“You’re seeing manufacturing numbers falling in Connecticut as a result of the legislation,” he said.

Malkowski, 36, an engineer by training, had built a company around the AR-15, beginning with a novelty version, a weapon tailored to left-handed shooters like Malkowski. His product line expanded, and his backlog of orders approached two years on Dec. 14, 2012, the day that Adam Lanza visited Sandy Hook Elementary School.

Armed with a Bushmaster AR-15 and at least a half-dozen 30-round magazines, Lanza killed 26 children and staff at Sandy Hook in less than five minutes.

New York was first to respond with an effort to ban the AR-15 and large-capacity magazines. In April 2013, the Connecticut General Assembly followed with sweeping gun controls enthusiastically signed into law by Malloy. 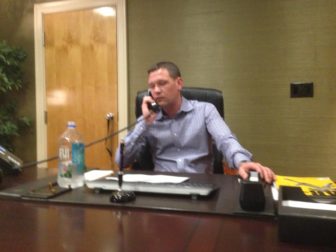 The new law expanded the state’s background checks for purchasers of guns and ammunition. It banned the retail sale of magazines capable of holding more than 10 rounds, as well as any centerfire, semi-automatic rifle capable of accepting a detachable magazine and having one of several features, including a pistol grip, bayonet lug, collapsible stock, flash suppressor or grenade launcher.

“I feel very good about the bill. It’s very meaningful,” said Ron Pinciaro, the executive director of Connecticut Against Gun Violence. “The way I look at it, smart guns laws work.”

A pull-down menu on the Stag site lists versions legal in states with bans.

“Carefully going through the law, we looked at what restrictions were in place and what we could do to comply with the laws and still do our best to supply our customers,” he said.

In New York, where the law banned the AR-15’s iconic pistol grip, a subcontractor developed a new open stock that the replaces the pistol grip and was accepted as legal. The Connecticut restrictions, particularly the ban on popular, centerfire cartridges, were more problematic.

“We’re not nearly reaching the sales that we had in the past,” he said.

The result was the company’s first layoffs.

Malkowski questions whether the post-ban AR-15s are safer.

“It has a lot of consequences [on sales], but I don’t know what difference it made,” he said.

Michael P. Lawlor, a former legislator who now advises Malloy on criminal justice issues, said the post-Newtown law represented the third time that the General Assembly had attempted to restrict the sales of rifles modeled on the AR-15 design.

This Stag Arms rifle is legally offered for sale in New York.

“Every time, we attempted to define the type of weapon we wanted to ban,” he said. “Each and every time, including this time, the manufacturers took it upon themselves to find a loophole to sell guns that are substantially similar to the ones we want to ban.”

Pinciaro, who acknowledges that handguns are the source of far more gun deaths than rifles, said the main purpose of the AR-15 restrictions was to try to reduce “the increasing firepower and lethality of these weapons.”

Connecticut’s gun laws should be examined as a whole, including the ban on large-capacity magazines, the required background checks and the ability of police to seize weapons, at least temporarily, from the targets of restraining orders obtained by estranged spouses, he said.

While the state now has some of the toughest gun-control laws in the U.S.,  the firearms industry says it remains the source of high-paying jobs in Connecticut.

He keeps his distance from a modern gun industry that pays its workers here, according to the National Shooting Sports Foundation annual report, an average annual wage of $71,937, even as he holds press events to promote the role of manufacturing.

“Manufacturing is at an important part of our economy and is getting a second wind in the United States,” Malloy said in a statement issued at A-1 Machining.  “This is the right time for the state to support not just the larger companies, as we are with the UTC agreement approved by the legislature earlier this year, but also the smaller supply chain companies needed to bring their products to market.”

Malkowski said he is trying to diversify his product line, investing in research and development. For the first time, he has bid on a military contract.

At the A-1 press conference, a few hundred yards from Stag on John Downey Drive, the commissioner of economic development, Catherine Smith, said the advanced manufacturing fund was designed to be flexible in the aid it offers manufacturers.

“It can be used to provide financial assistance for research and development, modernizing equipment, attracting new manufacturers to the state, and supporting education and training programs,” Smith said.

Malkowski has no plans to apply.