CT AFL-CIO mocks Foley: ‘Did I say something funny?’

New Haven – Republican gubernatorial candidate Tom Foley was greeted with derisive laughter Monday as he told a dubious Connecticut AFL-CIO that his call for a “Wisconsin moment” was simply a plea to end one-party Democratic rule in Connecticut, not to undermine collective bargaining rights.

“Did I say something funny?” Foley asked, looking at labor delegates in the ballroom of the Omni Hotel.

Foley was followed to the stage by Lee Saunders, the national president of the American Federation of State, County and Municipal Employees, and Gov. Dannel P. Malloy, the first-term Democrat certain to win the AFL-CIO’s endorsement Tuesday.

Both warned the delegates to be wary of Foley or any other politician who sees progress in Wisconsin.

“I am tired of politicians who will come around and say just about anything. There are people who call a Wisconsin moment a movement to eat more cheese,” Malloy said, pausing as the delegates laughed, “as opposed to what it truly is, and that’s an attack that you’re under and your members are under.”

Gov. Scott Walker, a Republican who led a GOP takeover of a Democratic-controlled Wisconsin statehouse in 2010, won passage of a budget that restricted the collective-bargaining rights of public employees, making him a hero to elements of the political right and an iconic villain to labor.

The changes capped raises for state workers, required greater employee contributions to pensions and health care, limited collective bargaining for many workers to only wages, and limited the ability of unions to collect dues from members. Saunders’ giant public-employees union lost 70 percent of its members in Wisconsin.

“Time for a reality check, OK?” Saunders said in a keynote speech after lunch.

Banging the lectern like a drum, his voice rising to a shout, Saunders said the “Wisconsin moment” was nothing less than an assault on working families, financed by wealthy, right-wing activists such as the Koch Brothers. What’s happened in Wisconsin is cautionary tale for every union member in America, he said.

“That’s a snap shot of what Mr. Foley would do here in Connecticut,” Saunders said. “He would join the other extremists in putting the interest of corporations over families, over you. So if you don’t want to be another Wisconsin, then don’t listen to his rhetoric. He will say anything, then he will try to kill you.”

Earlier, Foley minimized what he meant by “Wisconsin moment.” 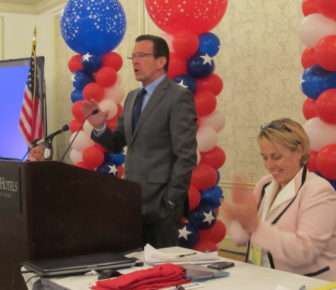 “Looking for a Wisconsin moment in Connecticut, which I’ve talked about repeatedly, means that I am hoping we go from one party rule to more balanced government, as Wisconsin did in 2010,” Foley told the delegates.

That’s when delegates who had been polite, if unresponsive, began to laugh. To labor, Walker represents another form of one-party rule, one that meant a sudden and far-reaching erosion of labor rights.

“It does not mean I will change the way collective bargaining works in our state, which is what my opponents have tried to say I meant, but it is not,” Foley said. “I will not, and you heard it from me today. And you can tell others that’s what I meant.”

He should not expect the AFL-CIO leadership to spread that word.

“It’s not something we buy,” said Lori Pelletier, the top leader of the Connecticut AFL-CIO. “I don’t buy it. I know the delegates don’t buy it.”

The Republican candidate was unaware he had stepped before an audience that had been whipped up by Stephanie Bloomingdale, secretary-treasurer of the Wisconsin AFL-CIO. Bloomingdale told delegates that the only thing a “Wisconsin moment” meant for labor was trouble.

“This is a historic struggle for the soul of America that goes far beyond the political aspirations of Scott Walker and his Tea Party friends,” she said. “Wisconsin workers took the first blow and make no mistake, it hurt. But I am here to tell you the house of labor in Wisconsin still stands.”

Delegates jumped to their feet to applaud.

Foley, the GOP convention-endorsed candidate, is the front-runner in a three-way primary with Danbury Mayor Mark Boughton and Senate Minority Leader John P. McKinney. With one exception, only the two party-endorsed candidates for governor and lieutenant governor, Malloy, Foley, Lt. Gov. Nancy Wyman and Penny Bacchochi, were invited to speak at the two-day convention.

The exception was Ted Kennedy Jr. of Branford, a candidate for state Senate.

Foley’s goal Monday was to deflate efforts by the AFL-CIO’s leadership to convince members that a Republican victory could endanger basic collective-bargaining rights in Connecticut. The federation has sent members to Wisconsin to support state workers there and see firsthand what Walker’s election has meant for public workers.

They played a short film for delegates featuring workers in Wisconsin, and the fiery Saunders was chosen as the first-day keynote speaker to reinforce a sense of urgency and danger from what he described a well-funded, national campaign to curb the influence of unions.

“Their goal is not to hurt us, sisters and brothers, their goal is to incapacitate us,” Saunders said.

“You know what this fight is about,” Malloy said.

He alluded to some of his own difficulties with labor, mentioning “mistakes,” without being specific. Later, he talked about “tone.”

His overall message was two-pronged: to paint Foley as the next Scott Walker, and restate his own series of labor accomplishments. One of the governor’s biggest applause lines was noting that he maintained state aid to municipalities.

“We are not responsible for a single layoff in a municipality, because of a budget cut we made,” Malloy said.

AFSCME, the biggest union in the AFL-CIO, represents thousands of municipal workers, as well as state employees.

In his speech, Foley repeatedly tried to contrast himself with Malloy, who has been accused at times of being high-handed with constituent groups. His demand for concessions dominated his first year as governor.

“For one, I am a good listener, and I am a straight talker. I do what I say I am going to do,” Foley said. “Talk to anybody who knows me well. If you have my word on something, you can count on it.

“I understand math, and I am a truthful person. I don’t believe in trying to move things forward by trying to fool people, twisting facts or telling people on the pretty side of the story. That is not the way I operate. I’m a tough negotiator, but I treat everyone with respect.”

Both Foley and Malloy and have promised not to seek further concessions from state employees next year, even though the next governor will face a project budget shortfall of more than $1 billion.

Saunders said labor has not always agreed with Malloy, but the governor has supported collective bargaining and played key roles in raising the minimum wage and adopting the nation’s first state law mandating paid sick days. Malloy, he said, backs project-labor agreements vital to the construction trades, and he spoke out against unfair labor practices used against health workers.

“Unlike Tom Foley, the governor is not waiting for a Wisconsin moment,” Saunders said. “We’ve got to remember that on election day. The worst thing, the worst thing we can do is sit on out hands.”