A labor embrace for Malloy, with a jab over education 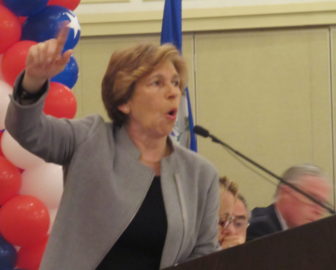 New Haven – The Connecticut AFL-CIO’s biennial political convention was a two-day infomercial promoting the re-election of Gov. Dannel P. Malloy, with one carefully choreographed note of discord: A rebuke to the Democratic governor’s choice of Stefan Pryor as commissioner of education.

Before formally endorsing Malloy, the statewide labor federation adopted a resolution Tuesday calling for a requirement that an education commissioner hold the same credential as a school superintendent, a standard that Pryor does not meet.

“We’re hoping the governor’s listening,” said Melodie Peters, the president of AFT-Connecticut, one of the state’s two major teachers’ unions.

The resolution drawn up by the AFT, which separately endorsed Malloy ahead of the AFL-CIO convention, was a message to a Democratic governor and to labor’s rank-and-file. It was meant as a gentle rebuke to Malloy, not a rejection; a way to soothe educators, not provoke them.

Pryor never was mentioned by name, but he has become a pressure-relief valve for labor, which acknowledges a need to draw anger away from the governor. Peters agreed when asked if the resolution was a second-term message to Malloy about a need for a new commissioner.

Teachers have been unhappy with the Malloy administration over its perceived friendliness to the charter-school movement, which Pryor symbolizes as a charter-school founder. More damaging were words uttered by the governor in a major address outlining education reform in 2012, when he suggested that tenure could be won just by showing up.

Teacher unrest has given Jonathan Pelto, an education blogger and former Democratic state legislator, an opening to try to organize a third-party run for governor.

Malloy told the delegates Monday in a well-received speech that he’s made mistakes, but he stopped far short of apologizing for what teachers still say was a gratuitous and deliberate insult.

The task for union leaders has been to manage the anger of the rank-and-file, sharply contrasting the overall labor record of Connecticut’s first Democratic governor in a generation with the hostility to labor and collective bargaining by GOP governors in once-union friendly states like Wisconsin and Michigan.

Another complication has been a local fight over control of the public schools in Bridgeport, an overwhelmingly Democratic city where Malloy needs a healthy turnout in November. A state-appointed school board named Paul Vallas, a national reformer, as superintendent, sparking a legal and, ultimately, a political fight.

A procession of delegates stepped up to microphones Tuesday to speak in favor the resolution.

“Education is a profession, not a hobby,” said Edward Leavy of AFT Local 4200 A. 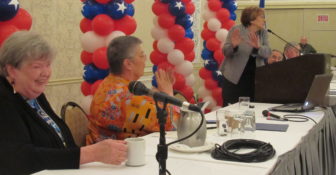 Anna Montalvo, the president of AFSCME Local 1522, which represents paraprofessionals in Bridgeport, said a superintendent and education commissioner should meet standards, as do her members.

But the message of the convention eventually circled back to a simple equation: What would be best for labor, the re-election of a Democratic governor or a Republican?

Sharon Palmer, a former AFT-Connecticut president who is Malloy’s labor commissioner, vouched for the governor’s commitment to labor.

“Let me say from up close and personal, he is a good boss,” Palmer said. “Sometimes he has a sharp tongue, but more often than not he uses that sharp tongue to fight off those who would diminish us.”

Palmer, Peters and Randi Weingarten, the national AFT president who was the second-day keynote speaker, all reminded the members of Malloy’s support for a broad labor agenda and his defense of locked out health workers represented by AFT at Lawrence + Memorial Hospital.

Weingarten ended the convention with a loud, passionate pitch for Malloy. She acknowledged rough spots in AFT’s relationship with Malloy over tenure.

“Yeah, I don’t like some of the things he’s said, either,” Weingarten said. “But what he’s done, he’s increased funding for K-12, increased funding by seven percent for K-12, making Connecticut the second-highest education spender in the country since the recession.”

She called Pelto a friend who has some important things to say, but his candidacy is a distraction and a danger that can only draw votes away from Malloy.

In November, Weingarten said, the choice will be between Malloy and a Republican, mostly likely Tom Foley, who lost in 2010 by just 6,404 votes. In a difficult time for progressives, she said, Malloy has walked with locked out workers, maintained aid to municipalities, increased the minimum wage and resisted a national trend toward undermining public pensions.

“That’s the choice, brothers and sisters, and that choice is ours,” Weingarten said. “And it means, just like Gov. Malloy walked the line at L + M, we need to walk the line for him. Just like he bucked the tide in a whole bunch of ways, we need to go help talk to our members talk to the broader community about the stakes of this elections.”

She told reporters after the convention that she spoke by telephone the previous day with Pelto, who had complained he wasn’t invited to speak. Only the major-party endorsed candidates addressed the convention.

Weingarten said third-party candidates can play an important role, and she has supported some in the past.