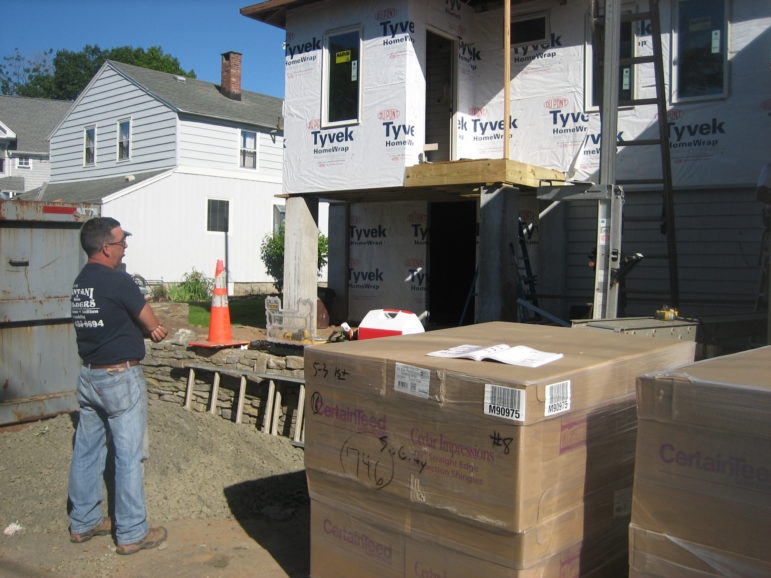 Contractor Dennis Pantani surveys Paula Brown’s Branford home on Long Island Sound which flooded during storm Sandy. He is elevating it by eight feet, but very little is being done to protect it from wind damage.

Branford – Paula Brown learned the hard way the kind of damage a tropical-style storm could inflict on her waterfront cottage here. Storm Sandy filled her crawlspace with water and pushed another few inches into her first floor.

“I only see one solution to keep this from happening and that would be to have the house raised,” she said at the time.

It’s been the solution for hundreds like her up and down the Connecticut coast. But there’s worry that it ignores another potential threat: wind.

“No one’s come to me and questioned me about wind or shown me a drawing to change things about wind,” said Brown’s contractor, Dennis Pantani, who is still working on her home. “Nothing, nothing, nothing.”

Brown is voluntarily complying with the Federal Emergency Management Agency’s strictest flood standards even though she doesn’t have to. Pantani elevated her home eight feet and it now stands on nearly three-dozen reinforced poured concrete posts sunk seven feet into the ground. Each post is attached with steel bracket to a wood beam nearly 12-by-5.5 inches thick.

But the windows will not have storm shutters and only a couple will be somewhat higher rated, not impact-resistant to handle hurricanes or the winds that can accompany storms like Tropical Storm Irene in 2011 and Sandy the following year. Pantani will add clips to secure the roof to the rest of the house in places where the edge is open.

“But we’re just not opening the walls to get to them,” he said.

The code says he doesn’t have to.

Connecticut has had a statewide building code since 1971. It’s based on the International Building Code, which is updated every three years. But the state has been slow to implement it. The 2009 code for residential structures – that’s one and two family units – went into effect this February. The 2012 code is under review with a 2015 implementation goal. But the 2015 code is already out.

The 2009 code does update some of the wind regulations. For Connecticut it actually lowers the overall wind-speed requirements home construction must meet by about 10 miles per hour across the state’s three wind zones. The highest is now 110 miles hour in the small southeast corner of the state. The lowest is 100, which applies to most of the state.

It does add one tougher measure known as a wind-borne debris zone. In the state’s 10 eastern-most shoreline communities – that’s Madison to the Rhode Island border – homes south of I-95 must have windows that can withstand the impact of an a four-foot, 2-by-4 piece of wood moving at 40 feet per second, or have plywood on site that is pre-cut, with pre-drilled holes to fit the home’s windows in the event of a storm.

There’s little storm-specific wind roofing requirements, and none of the newer techniques. But there is a big catch for whatever is in there: The code generally applies only to new construction – not the vast older housing stock in the state, unless the home is being substantially renovated.

“What you touch has to comply,” said Dan Tierney, the state building inspector, who said it would be a slippery slope to mandate expensive retrofits like wind-resistant windows, storm shutters and stronger ways to tie down a roof.

But in the post Irene and Sandy world, many people don’t touch anything. They just elevate the home because FEMA forced them to, and occasionally because they want to – as Brown did.

“I ask people if they want to retrofit for the wind loads,” said John Grant, a designer who has done 27 elevations since Irene and also serves on Milford’s zoning commission. “The response 99 percent of the time is that they have just enough money to raise the house.”

In Connecticut, all local building officials can do is grit their teeth and enforce the state building code. While they can encourage homeowners to build or renovate to higher standards including those for wind, communities cannot mandate requirements that exceed the state code. 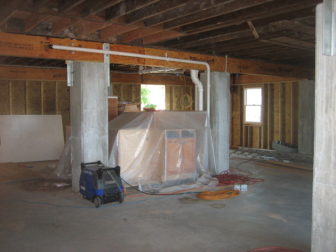 East Haven building official James Bassett said he recommends to homeowners that are opening walls and ceilings during an elevation that they strengthen structures. “Anytime you want to exceed, that’s a beautiful thing,” he said.

In Old Saybrook, while building official Don Lucas admitted his town and others were not prepared to deal with their new wind-borne debris zone, what really has him worried are all the old cottages in the area.

“As long as you get it above the floodplain,” he said is how people think.

But when he sees the condition of some of the old unheated structures, he often thinks: “Do you really want to put this chicken coop up in the air? There is nothing in the code that addresses that; that mandates you have to strengthen the windows or the roof.

Part of the answer to that question came to something of a head during the last legislative session.

A provision in insurance legislation prohibited insurance companies from refusing to issue or renew a policy, or from canceling one outright if a homeowner does not install storm shutters or have pre-cut, pre-drilled plywood for windows on site.

The insurance industry and the state’s own insurance department fought it.

“The whole point of the shutters is mitigation. It helps prevent losses. People pay a premium if there’s a loss, and to the extent that losses in the aggregate go up, that could mean increases in premiums,” said John Murphy, state affairs director for the National Association of Mutual Insurance Companies’ Northeast region. “If you can take steps to keep losses from happening or being as serious than they otherwise would have been, that’s a benefit for everybody.”

But Gov. Dannel P. Malloy signed the bill on June 11, making it somewhat emblematic of the mixed concern at official levels over whether homeowners need to take more responsibility and the state needs to think more seriously and rigorously about wind preparation.

“You kind of scratch your head at kind of stepping back from encouraging or at times requiring people to take steps to protect their own property,” Murphy said. “Would we like to see the average Joe on the street put some roof strapping on to keep roof from blowing off? Of course.”

To be sure, much of the concern is insurance industry driven, stemming initially from Hurricane Andrew in Florida in 1992, which demonstrated not only what wind could do to poorly anchored roofs, but also exposed gaps in the building code, training and enforcement.

“The regulatory regime also needs to support licensing, training, discipline of contractors and sub-contractors,” said Debra Ballen, senior vice president for the Insurance Institute for Business and Home Safety, a non-profit research organization for the insurance industry. “So we have something in place so that the people who are hammering the nails are doing it correctly.

“We want people to value the strong roof instead of the strong granite counter top.”

According to the IBHS, every dollar spent on mitigation saves $4 in community disaster recovery expenses. And a survey of closed claim payouts in 2004 and 2005 showed that 95 percent were filed relative to the roof.

“The greatest danger is getting hit by waves. When you get a one-and-a-half-foot wave, it’s like getting hit with a 120 mile-per-hour wind.
Tim Reinhold
IBHS’s senior vice president of research and chief engineer

The Institute has a series of voluntary programs that include measures to handle wind. Alongside test videos that show the kind of damage wind can cause, it recommends securing a roof down to the foundation, taping the seams between the pieces of plywood under the shingles and closing off gable vents to keep water out.

Even so, Tim Reinhold, IBHS’s senior vice president of research and chief engineer, said even though elevating a home can raise wind loads by 15 percent: “The greatest danger is getting hit by waves. When you get a one-and-a-half-foot wave, it’s like getting hit with a 120 mile-per-hour wind.”

Tom DiBlasi is a structural engineer who serves on the state’s Codes and Standards Committee that reviews and fine-tunes the International Building Codes for use in Connecticut.

Like others, he’s concerned about the huge stock of older homes along the shoreline. He agrees they are more vulnerable to wind damage, but he’s not sure elevating them trades a flooding problem for a wind problem.

But George Bradner, the property casualty director for the Connecticut Insurance Department and co-chair of the Long Term Recovery Committee established after Irene, said the state would benefit from adopting low-cost practices advocated by IBHS – such as taping the seams in roof plywood.

“That to me is a no-brainer,” he said. “And not necessarily just on the coast. You can apply it anywhere in the state.”

It saves insurers money, protects some of the most valuable tax base in the state, and generally makes the shoreline more resilient.

“There’s some expense there,” he said. “But in the long run it saves homeowners a lot of anguish. They have a house to come back to.”

The Regional Greenhouse Gas Initiative is often described as a cap-and-trade program. It’s not. This first-in-the-nation regional effort to lower carbon emissions from power plants is actually a cap-and-invest program.

The U.S. House of Representatives voted Friday to aggressively police the “forever” chemicals, but the bill faces an uphill battle to become law.