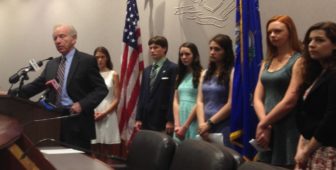 Former Sen. Joseph I. Lieberman and his scholarship winners.

Joe Lieberman isn’t voting for Dan Malloy. But that’s not news. He’s not voting for Tom Foley, either. Or Jonathan Pelto, an independent. In fact, the man who represented Connecticut in the U.S. Senate for 24 years no longer lives here.

Lieberman, 72, is a registered voter in the Riverdale section New York City now, close to many of his 13 grandchildren and his post-Senate perch as senior counsel to Kasowitz Benson Torres & Friedman in Manhattan.

He was back in Hartford on Tuesday, introducing the second class of recipients of the Joe Lieberman Connecticut Scholarship Fund. It provides the students a renewable $1,500 annual scholarship and a little TV time, if only as a backdrop to a Lieberman news conference.

After introducing the 2014 class, Lieberman held forth on third-party politics and Iraq, the issue that drove the Democratic vice presidential nominee of 2000 from the Democratic Party in 2006.  A proponent of keeping a force of at least 10,000 troops in Iraq to provide security and political stability, Lieberman offered mute criticism and praise to the Obama administration.

He applauded President Obama for intending to dispatch 300 military advisers and Secretary of State John Kerry for trying to foster a new coalition government. But the withdrawal of U.S. troops most likely contributed to the growing sectarian violence in Iraq, he said.

“The fact that we didn’t keep any of our troops there has contributed to this striking series of developments where this extremist jihadist group has begun to move rapidly throughout the country, and the Iraqi government seems unable to hold ground,” Lieberman said.

Lieberman won re-election to the Senate in 2006 as an independent after losing a Democratic primary, but that experience does not necessarily make him empathize with Pelto, a former Democratic legislator running for governor as a third-party candidate.

As the running mate of Al Gore in 2000, he and Gore won the popular vote nationally, but lost the electoral vote by little more than 500 votes after a protracted recount in the deciding state of Florida.

“One of the reasons that was so close in Florida, I believe, was that there was a third-party candidate named Ralph Nader,” Lieberman said. “And arguably, if Ralph hadn’t been in the race, Al Gore and I would have won more clearly in Florida.”

Bush and Gore each won slighty more than 2.9 million votes in Florida. Nader was third, with nearly 100,000.

Patrick J. Buchanan, a conservative, may have drawn votes from Bush, but his impact was smaller as he received fewer than 20,000 votes.

The 2013 winners were awarded second-year scholarships.