Sen. John McKinney talks with members of the Associated Builders and Contractors’ Connecticut chapter prior to Thursday’s forum at the Sheraton Hartford South Hotel in Rocky Hill.

Republican gubernatorial contenders Tom Foley and John McKinney found more common ground than points of contention Thursday night as they squared off for the first time in a campaign forum.

Addressing the Connecticut chapter of the Associated Builders and Contractors at the Sheraton Hartford South in Rocky Hill, the GOP candidates pledged to reduce state spending and taxes while slamming Democratic Gov. Dannel P. Malloy for Connecticut’s sluggish recovery from the last recession.

“People are really upset. They are angry,” said Foley, a Greenwich businessman and the party’s 2010 gubernatorial nominee. “They think something has been taken away from them, … their prospects for the future.”

“Connecticut is unaffordable and we don’t have the jobs,” said McKinney, a Fairfield Republican and the state Senate’s minority leader. “We spend too much, tax too much borrow too much … and regulate small businesses to death.”

Though nonpartisan legislative analysts say there is a $1.4 billion deficit, about 7 percent, built into the first new state budget after the election, both Republicans said they expect to be cutting taxes – not raising them – after the election.

Foley said the key to eliminating the red ink is holding spending flat for the next two years. Provided Connecticut’s economy continues to recover, he added, this should stabilize state finances and allow for repeal of the business entity tax, a $250 fee levied every two years, primarily on small businesses.

“We have taxes that are unfair to businesses and to people,” McKinney said, adding the state should stop levying income taxes on pensions – a policy that drives too many people out of state.

McKinney and Foley stake out slightly different ground when it came to cutting state spending.

The Senate leader said he would reopen negotiations with state employee unions and seek more concessions. 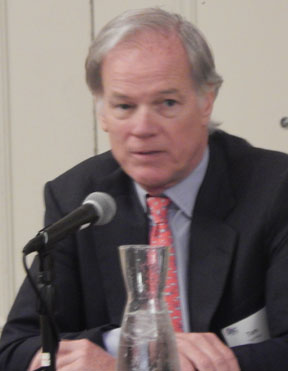 Tom Foley: “People are really upset. They are angry,”

Despite concessions provided in 2011, state employees still receive a health care plan that is “more expensive than the best private-sector plan out there,” McKinney said, adding he also would seek to replace the pension program with a 401(k)-style plan for new workers.

McKinney also said he would seek to reduce the state’s reliance on public-sector workers to provide social services and turn to more cost-efficient private, nonprofit agencies.

When asked whether he favored further concessions, Foley didn’t address that point directly. But he said the cost of state employees’ salaries and benefits “is really only a third of the state budget.”

Foley said he thought the state could save on its Medicaid program, which provides health care to the poor, by leveraging better rates with providers. “You have some power in the marketplace,” he said.

Both Republicans agreed state government could save funds by not ending the corporate assistance policies the Malloy administration has followed.

“This governor’s been making a lot of lousy investments with your money and my money,” Foley said. He cited the nearly $300 million investment approved three years ago to attract The Jackson Laboratory as the centerpiece of a bioscience research cluster in Farmington. Foley noted that the company is required to create only 300 jobs in exchange for that assistance.

Contrasting that investment with the $1.5 billion in new taxes Malloy approved in 2011, Foley said most businesses are reeling from that move while a few benefit from corporate assistance.

“That’s like stepping on the accelerator and the brake at the same time,” he said.

McKinney added that unless the state changes its economic development policy, “every business is going to raise their hand and say, ‘we’re thinking about moving, are you going to pay us?’”

Foley and McKinney found more common ground with the state’s transportation system, calling it overcrowded and in poor condition.

McKinney said he would veto any effort to install tolls, adding the existing fuel taxes raise enough revenue to improve transportation. But state officials raid those funds for non-transportation programs too often.

Foley similarly decried the raids and said he opposes tolls to provide more revenue for the state budget. But he also said tolls have been effective in some states in reducing traffic in high-congestion areas, and that he would be open to discussing their use for that purpose – provided any toll revenue was used to fund a matching reduction in gasoline taxes.