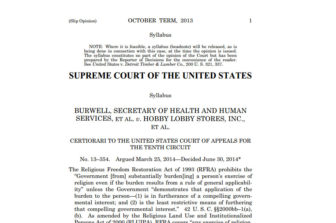 The Supreme Court’s 5-4  decision in the Hobby Lobby case fed  Democratic plans to attack Republican rivals this election year for waging a “war on women.” It instantly became an organizing tool as the state Democratic Party launched an online petition drive to identify and mobilize opponents of the ruling.

The justices ruled that closely held corporations with religious objections can seek an exemption from the Affordable Care Act’s mandate to include contraceptive coverage in their employee’s health plan.

Neither Tom Foley nor John P. McKinney, the two candidates for the Republican nomination for governor, issued a statement on the ruling. Neither candidate or their spokespersons responded to calls for comment.

“While we should all respect each other’s right to hold different positions based on religious beliefs, women should not be denied access to reproductive healthcare benefits due to the personal beliefs of their employer. Today’s decision from the Supreme Court is an affront to that very basic and fundamental idea,” Malloy said. “In our diverse society, it is unconscionable that the religious beliefs of a private, for-profit employer can dictate the kind of medical care that is available to an employee.  We will review this decision and assess the impact it may have in Connecticut.”

In the 5th Congressional District, the Republican nominee, Mark Greenberg, praised the decision: “Any time that any branch of government makes a decision that enhances our freedoms or limits the government’s reach into our lives and businesses, that is a good thing.”

The decision provoked a vague response from Dan Debicella, a Republican who is trying to unseat Rep. Jim Himes, D-4th District.

In a statement, Debicella did not say whether he supported or opposed the Hobby Lobby decision, but said women should have other options besides obtaining birth control through employer-based health plans.

“I support all women having access to contraception, and believe it should be sold over-the-counter for women to decide for themselves if and when they want it,” Debicella said. “Access should not depend on insurance or any business owner’s philosophy.”

Sens. Richard Blumenthal and Chris Murphy, D-Conn., also denounced the decision. Blumenthal used the ruling in a letter from his campaign asking potential voters and donors  “to add your name to now to stand for women’s right to access to comprehensive health care.”

“The Supreme Court’s decision in the Hobby Lobby case dealt a crushing blow to individual rights to privacy by ruling in favor of Hobby Lobby and allowing some corporate boss’s to deny women access to contraception based solely on their own beliefs,” Blumenthal’s appeal said.

In other parts of the country, Republicans hailed the Supreme Court decision, which represents their biggest victory against a provision of the Affordable Care Act.

“This decision protects the religious freedom that is guaranteed to all Americans by the First Amendment, and we’re grateful the Court ruled on the side of liberty, “said Republican National Committee Chairman Reince Priebus in a statement.

By Ana Radelat and Mark Pazniokas