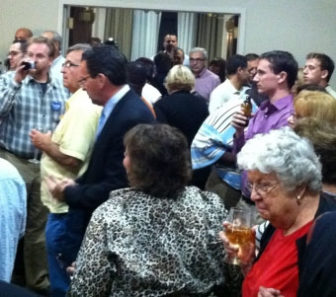 Gov. Dannel Malloy mingling at the Diageo cocktail party in 2012.

The pep talk for the Connecticut delegation to the 2012 Democratic National Convention in Charlotte, N.C., came from the host, Gov. Dannel P. Malloy. But the drinks were on the worldwide beverage company, Diageo North America.

Nearly two years later, Diageo and Pfizer, the pharmaceutical company that hosted a separate reception, are each paying $5,000 to the Office of State Ethics, conceding they failed to report the receptions as a lobbying expense.

In settlements released Monday, both companies said they failure was inadvertent, based on an erroneous belief that neither function exceeded the reporting threshold of $10 per person. Each has filed supplemental expense reports.

“Lobbyist reports must fully disclose all expenses as required by the Code of Ethics,” said Carol Carson, executive director of the Office of State Ethics.  “It is worth noting that the public officials and employees that attended did not violate the Code, because the total cost per person did not exceed the $50 limit.”

The events were hardly secret: The Mirror reported on both in a story about the corporate underwriting of two political conventions.

“I’ve got to say the liquor here is not bad, either,” Malloy said at the Diageo reception in September 2012, when Democrats nominated Barack Obama for a second term. “We very much appreciate it, our friends who are supporting this event, very much appreciated. You have some of the best beers and best liquor available.”

The bill for a Connecticut delegate barbecue at Treehouse Vineyards in Monroe, N.C., was picked up by Pfizer, the world’s largest drug company.

At Diageo’s reception, delegates sipped the beverage company’s imported beers, Harp and Red Stripe, as Malloy urged them to work not only in Connecticut, but to consider trips to New England’s battleground state, New Hampshire.

“Listen we all have got a lot of work to do, not just over the next couple of days, but weeks to come,” Malloy said.