GAO: CT small businesses paid more than most others for health care 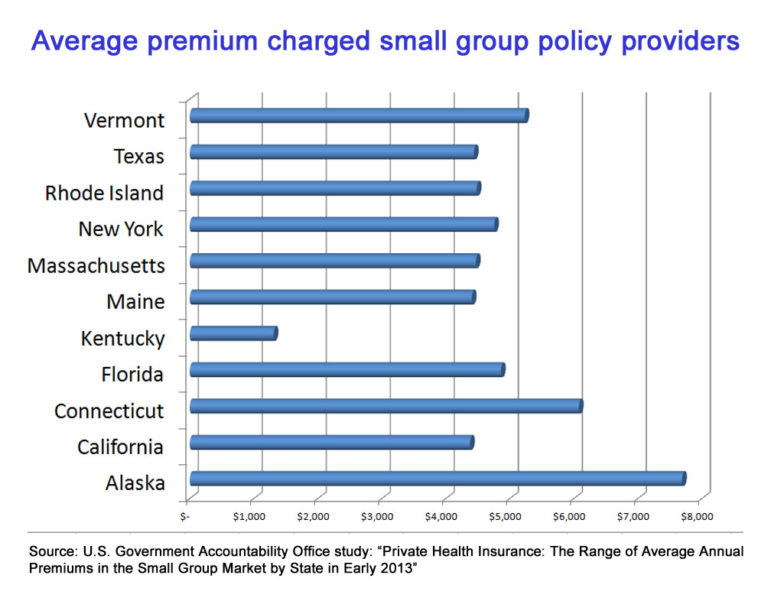 Washington – Federal researchers have determined that Connecticut’s small businesses and non-profits pay more than those in every other state – except Alaska – to provide health care coverage to their workers.

The Government Accountability Office studied the average premium charged by small group policy providers in all 50 states and the District of Columbia and determined it cost an average of $6,080 to cover an individual in Connecticut in the first quarter of 2013. That was just before implementation of the Affordable Care Act’s prohibition against considering the health or gender of members of a small group when determining premiums.

Only Alaska, with an average annual premium of $7,691, had costlier small group health insurance plans than Connecticut. Coverage was cheapest in Kentucky, which had an average premium cost of $1,311.

Some of the highest premium rates were in the Northeastern United States, which tends to have high medical costs and an aging population.

Tommelleo said demographics and the cost of medical services by geographic location were also factors that resulted in a difference in premiums from state to state.

So did the town or city where an individual in Connecticut lived.

The GAO report said “ranges could vary widely within a particular state for a number of reasons, including significant differences in the services covered, cost sharing features selected, and the factors considered when insurers set the premium rates for each small employer.”

Although the ACA ended the insurer practice of considering the health and gender of its members when determining rates, age can still be a factor.

And, especially before the ACA set new restrictions on insurers, so could the actions of a state insurance department.

The GAO said state regulators could limit “how insurers vary premiums for different small employers, the factors such as, age, gender, and health status of employees that could be considered when setting premiums rates for the employer group, and the range of variation among premiums rates across employers.”

The study was requested by Sen. Orrin Hatch, R-Utah, who hoped to establish a baseline of small group premium costs before the ACA went into effect. He believed it would help prove the health care law will drive up premiums for small businesses.

The Affordable Care Act exempts businesses with 50 or fewer full time employees form the requirement that they offer employees health insurance coverage and offers tax credits to some small businesses that do offer coverage.

But starting in 2016, larger businesses will be required to cover their workers or pay a fine.