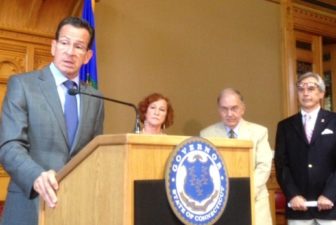 Gov. Dannel P. Malloy says fears over a ground-breaking state law mandating paid sick days were unrealized, but he demurred when asked Tuesday if he is ready to seek an expansion of a law that now has a limited reach.

Three years after the law’s passage, Connecticut remains the only state mandating that some private employers offer paid sick days. Manufacturers, some non-profits and employers with fewer than 50 employees are exempt.

“I have talked to a number of governors and legislators, and I think what we’re starting to see is people now have a case study that all of the things that people said in Connecticut would happen in fact don’t happen,” Malloy said.

Quoting a survey of 251 state businesses that was released in March, Malloy said the evidence is that the law provided a real benefit, especially for part-time workers in service industries, with little or no negative impact on the economy.

But Malloy was asked twice if the data supported an expansion of the benefit to employees of manufacturers or smaller companies. Twice, he praised the law without directly answering.

“This has proven it self to be good for employees and the right way to go,” Malloy said.

The governor, who made his comments at a press conference at the State Capitol on the third anniversary of his signing the bill into law, seemed to be simultaneously reminding his political base of a legislative accomplishment and suggesting to opponents they have little reason to complain.

A spokesman for the Connecticut Business and Industry Association said the absence of horror stories does not mean the law was good public policy for Connecticut, a state consistently rated poorly for its business climate. (A recent CNBC survey pegged the state as having the fifth worst business climate.)

“I’m not quite sure I would be putting out quite the same rosy picture as some of the proponents,” said Eric Gjedde, assistant counsel of the association. “No other state has followed us down this path yet. That’s the biggest lesson from this.”

Malloy committed to the passage of a paid-sick days law during his campaign in 2010, when he was elected as the state’s first Democratic governor in a generation. He was cross-endorsed by the Working Families Party, whose biggest issue that year was paid sick days.

The votes Malloy won on the WFP line proved crucial as they exceeded his narrow margin of victory: just 6,404 votes.

He was joined at the press conference by backers of the law: Senate Majority Leader Martin Looney, D-New Haven; Rep. Peter Tercyak, D-New Britain, co-chairman of the Labor and Public Employees Committee; and Christine Palm of the Permanent Commission on the Status of Women.

Women are disproportionately affected by a lack of paid sick leave, because they still tend to be the primary caregivers.

“This has been a huge boon for working women,” Palm said.

Tercyak recalled the dire predictions made by business groups and Republicans in 2011.

“Nobody stood up and said, ‘This is why our business is going under,’ ” Tercyak said. “There are no horror stories about how the entire work force disappeared. People are reasonably using this to protect their health, their families’ health and all of us.”

The law passed without a single Republican vote. Senate Minority Leader John P. McKinney, R-Fairfield, is now one of candidates for the GOP gubernatorial nomination.

Starting Jan. 1, 2012, hourly workers in 68 covered job classifications began earning paid sick time at a rate of one hour for every 40 hours worked. Employers that already offered vacation or other personal time at the same rate needn’t provide additional time.

Workers can earn up to 40 hours off in a year.

The legislature has amended the law to lessen the administrative burden on business. Companies need now report their total employment annually, not quarterly. They also are free to compute the benefits over any 12-month period, not a calendar year.