Malloy delivers for SEIU, and the union returns the favor 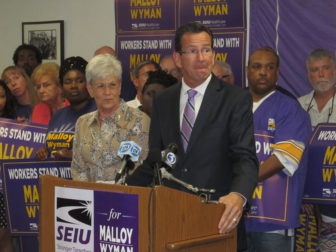 Gov. Dannel P. Malloy basked in the embrace Wednesday of the giant Service Employees International Union, perhaps the one union in Connecticut whose relationship with the Democratic governor has been unambiguously positive.

In 2010, the SEIU delivered crucial early support for Malloy, providing the backing of the state’s largest union while he still was fighting for the Democratic nomination. Over three-plus years as governor, Malloy has repeatedly returned the favor.

Executive orders Malloy signed in 2011 allowed SEIU affiliates to organize and represent state-funded day-care workers and personal-care attendants for persons with disabilities, which soon will allow the union to collect dues from new members or charge a negotiating fee to those who decline to join.

This year, Malloy backed the passage of a financial transparency law for the nursing home industry, a tool sought by SEIU in its battle with a nursing home chain that tried to use a bankruptcy to break a union contract.

The union delivered its formal endorsement of Malloy and Lt. Gov. Nancy Wyman for a second term Wednesday, promising to sell its 65,000 dues-paying members on the Malloy-Wyman record. It hopes to also provide 1,500 volunteers to turn out the vote in what is now projected to be a close race.

Memories of the governor’s tense relationship with public-sector union members in 2011, when the man they helped elect demanded wage and other concessions to close a record budget shortfall, are fading.

The state AFL-CIO endorsed the governor last month, as have major elements of the labor federation, including AFT-Connecticut, the United Auto Workers and, now, SEIU. A third-party candidate, former Democratic legislator Jonathan Pelto, complained he was shut out of the union endorsement process.

Public-sector union leaders say they are grateful that Malloy made no attempt to restrict collective bargaining rights or greatly curb retirement and health benefits, cost-cutting imposed by governors in other states. With thousands of municipal members, they say that Malloy’s refusal to cut state aid to cities and towns saved jobs.

On Wednesday, Malloy characterized the 2011 concessions as an achievement, looking past the resentment expressed by some unions during his first difficult year in office. Ratification of the deal took two tries.

“What we did together is remarkable,” Malloy told about 50 members of SEIU at the union’s headquarters in Hartford.

Senate Minority Leader John P. McKinney, one of two candidates for the GOP nomination for governor, says Malloy’s relationship with SEIU and other unions should be viewed with suspicion, not celebrated.

“It’s not a healthy relationship. We have multi-billion dollar budget deficits. We have unfunded pension and healthcare liabilities,” McKinney said. “The governor’s cozy relationship with union leaders impairs our ability to solve those problems.”

Malloy had a ready answer Wednesday when asked what he would tell a worker who refused to join the union, but still must pay SEIU for negotiating on his behalf.

He was interrupted by cheers of the SEIU members.

“Fair is fair, join us. Accept the benefits, help us maintain those benefits,” Malloy said. “That’s what I would say.”