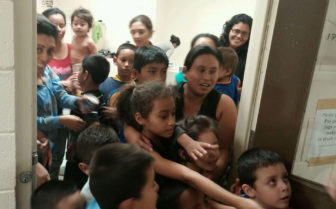 This photo taken by U.S. Rep. Henry Cuellar, D-Texas, is of detained children, and some of their mothers, at a facility in Texas.

Washington – Dozens of Central American children who have made the arduous and dangerous trip through Mexico to the United States have been aided by Connecticut immigrant advocates who reunite them with family members in the state.

As young as 2 years old, the children are part of a flood of young migrants — nearly 90,000 since October — who have been detained after crossing the Texas-Mexico border illegally.

John Jairo Lugo, an immigration advocate with New Haven’s Unidad Latina en Accion, said his organization has helped about 10 children – some of them accompanied by their mothers, others not — who have relocated to Connecticut to live with family members. All of the children are from Guatemala and range in age from 2 to 17-years old.

Lugo said his organization helped relocate the children in New Haven “before the situation got worse” in the last few weeks and detention facilities were filled to overflowing.

He and other immigrant activists in the state are incensed that President Obama plans to ask Congress  for legislation that would change a 2008 law that dictates how the federal government handles immigrant children in order to speed up their deportations. the president wants to give the Border Patrol the authority to send an unaccompanied child migrant home immediately, without further review.

Lugo said he’s joining a rising chorus of immigrant advocates who are slamming the effort to rush deportations.

“We are going to start making noise,” he said

Most unaccompanied minors being caught by Border Patrol agents are handed over to the Department of Health and Human Services, which houses them and advises them of their legal rights. HHS detention facilities are overwhelmed by the flood of young immigrants – but a family member in the United States can make a claim to free them.

The International Institute of Connecticut, a non-profit with offices in Bridgeport, Stamford and Hartford that provides aid to refugees, is also helping relocate Central American children who have recently crossed the border.

The institute, an HHS subcontractor, provides “post-release” services to immigrants. That means that if a child in detention is handed over to a family member, institute case workers make sure the living arrangements are suitable and the children have access to legal help to press their immigration cases.

Institute Executive Director Angela Anderson said there’s been an uptick in the numbers of children helped since last fall. Since then, the institute has helped 20 children who have been relocated to Connecticut to reunite with a family member.

She said many of the children have been abused by traffickers on their long journey from Central America through Mexico to the U.S. border. They continued to suffer when they were seized by Border Patrol agents who place them in crowded detention facilities, she said.

“We’re talking about traumatized and abused children,” she said. “What we’re seeing now is a real humanitarian crisis.”

Many of the immigrants were detained while fleeing violence and extortion from gangs in Guatemala, El Salvador and Honduras. Andersen said the majority of children her organization helped are from Guatemala and Honduras. They range in age from 12 to 17.

Some children believe they will receive leniency from U.S. authorities because Obama two years ago granted temporary legal status to undocumented children who were brought to the United States by their parents in an executive order called Deferred Action for Childhood Arrivals. But to be eligible for DACA, children had be living in the United States continuously since 2007 and be at least 15 years old.

The influx of child migrants is such a problem for the Obama administration that Vice President Joe Biden traveled to Guatemala last month in an effort to discourage youths from making the trip north.

“We’re going to hold hearings with our judges consistent with international law and American law, and we’re going to send the vast majority of you back,” Biden said during a June 20 press conference in Guatemala.

“It is shocking,” she said. “I don’t think any of the immigrant advocates saw it coming.”

Andersen said she, and other advocates hoped the president would ask Congress for extra money – at least $200 million – to take care of the children.

The issue has become a football in this election year, where Democratic control of the Senate is at stake.

Republicans are blasting the Obama administration – and Democrats in general — saying the influx of young immigrants is a result of a failed immigration policy.

Democrats are blaming House Republicans for failing to pass a comprehensive immigration bill that was approved by the Senate and for saying the GOP won’t act on any immigration legislation this year.

Sens. Richard Blumenthal, D-Conn., and Chris Murphy, D-Conn. have scheduled a press conference in Hartford this morning to say the immigration crisis “emphasizes the urgent need for the House to pass comprehensive immigration reform.”