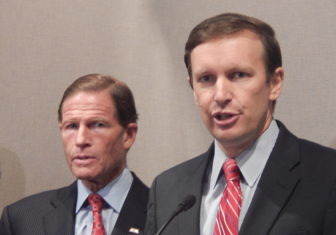 U.S. Sens. Christopher Murphy and Richard Blumenthal called Thursday at the state Capitol for passage of an immigration reform bill they called crucial to safeguard as many as 80,000 migrant children expected to enter the U.S. alone this fiscal year.

The measure already has passed in the Senate, and the two Connecticut Democrats urged the Republican-controlled House of Representatives to take up a vote. President Obama, who supports the measure, already has said that he suspects immigration reform efforts are dead this year.

“Let the House vote,” Blumenthal told reporters during a mid-morning press conference. “It will pass there too, overwhelmingly.

The measure, which Blumenthal helped to draft, would expedite due process requirements for tens of thousands of children who have fled Central America – either to seek family here in the U.S., or who have been sent away by their families to escape violence at home.

More than 52,000 immigrant children already are being held at U.S. border detention centers, and Blumenthal said that total is expected to approach 80,000 before the federal fiscal year ends on Sept. 30.

Most of these children have fled severe violence and poverty in Central America, coming particularly from Mexico, Guatemala, El Salvador and the Honduras, Murphy said.

“We have to start thinking creatively about how to deal … more compassionately with those children sitting on our border,” he added.

Many of the countries these children are fleeing from are plagued by severe gang and domestic violence issues, as well as by poverty and a lack of health care.

The children fleeing to the U.S. often become victims of human trafficking, rape and other violence and abuse, Murphy added.

The reform bill pending before the U.S. House also would authorize better care for those children in detention here.

“We need to deal with the root causes of this humanitarian crisis,” Blumenthal said.