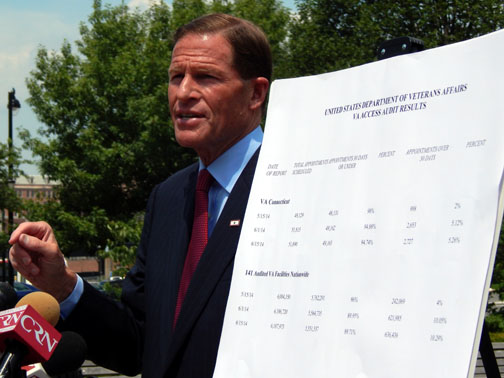 Washington – Since the scandal this spring over long wait times and cover ups of poor performance at veterans’ health facilities, there’s been a sharp upturn in the numbers of Connecticut veterans who have waited more than 30 days to receive medical help.

According to new information released by the Department of Veterans’ Affairs, in mid-May, 998 Connecticut veterans had waited more than 30 days to receive care. That number grew to 2,727 on June 3.

The trend of doubling or tripling of veterans with long wait times is nationwide.

Sen. Richard Blumenthal, D-Conn., is among lawmakers who want to know why there’s an “across-the-board, unacceptable rise.”

He sent a letter on Monday to Acting Secretary of the VA Sloan Gibson demanding an answer.

“Simply put, the VA seems to be going in exactly the wrong direction in seeking to address dangerous and deadly health care delays,” the letter said. “Such statistics raise serious questions. Why are the wait times increasing? Is there a lack of administrative resources? A shortage of doctors or other critical health care professionals? Are the numbers themselves valid and consistently reported?”

More veterans may have made appointments to seek medical help in the wake of the reports of long wait times at VA facilities.

VA records show there were 49,129 scheduled appointments in Connecticut veteran facilities in mid-May and 51,890 on June 3.

Another reason for the reported uptick in patients waiting longer than 30 days for help is that the facilities may be reporting data more accurately.

But Blumenthal said the new information – and new numbers – are disturbing.
The senator, in a separate letter to Gibson, has also requested more information about a VA audit of facilities sparked by disclosures about wait times. That audit found severe problems at several VA facilities, but none in Connecticut. There are 216 VA health facilities, including hospitals in West Haven and Newington and six outpatient clinics in Danbury, New London, Stamford, Waterbury, Willimantic and Winsted.

Blumenthal wrote a similar letter to Gibson a month ago and his latest letter said “today marks a full month since the original request and further delay is inexcusable.”

Congress is grappling with what to do with the problems at the VA.

Blumenthal held a press conference in Hartford Monday to discuss his correspondence with Gibson.

“There is a twist to the Connecticut numbers because VA officials, in Washington and int he state, said Connecticut is place where this kind of problem did not occur,” Blumenthal said. “So Connecticut facilities were exempt from any followups.”

Both chambers of Congress recently passed legislation designed to improve the VA system and prevent any more patients from dying while waiting for care. Now House and Senate negotiators are trying to compromise on a final bill this week.

Legislation passed by both chambers would allow veterans to visit private doctors at VA expense if they are forced to endure long waits for appointments at VA clinics or live more than 40 miles away from the nearest VA facility.

Both the House and Senate bills would also give the VA secretary more authority to fire poorly performing employees.

But there are differences to be worked out between both bills. For instance, the Senate bill would give the VA leeway to spend $500 million in unused funds to hire more doctors and other medical staff.

The Senate will also try to move forward this week on President Obama’s pick of former Proctor& Gamble CEO Robert McDonald to head the VA.

But there are many vacant positions at the top of the VA right now and little movement on other nominees that would fill those jobs. One of them is Linda Schwartz, commissioner of Connecticut’s Department of Veteran’s Affairs. Schwartz was chosen by President Obama nearly a year ago to fill the position of Assistant Secretary of Veteran Affairs for Policy and Planning.