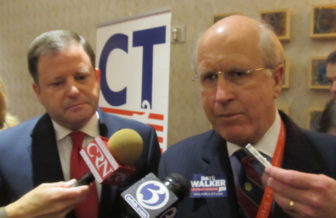 The Republican gubernatorial ticket of John P. McKinney and his running mate, David M. Walker, said Wednesday they have qualified for $1.35 million in public financing for the GOP primary and are rushing to air a commercial produced this week.

The State Elections Enforcement Commission has concluded its review of their $250,000 in qualifying contributions, but the formal approval will not come until next week — just four weeks before the Aug. 12 primary.

The campaign said the informal approval will allow them to begin “activities” this week, a reference to rushing on the air with a commercial produced Monday — the same day that Tom Foley, McKinney’s rival for the nomination, aired his first spot.

According to an FCC site where political buys are posted, the campaign has yet to reserve air time on any of the Hartford-New Haven broadcast stations.

“We are pleased to announce the SEEC has notified us that our campaign has successfully submitted follow-up documentation that will allow us to qualify for citizen election grant funding.

“While we have received notice that we have qualified, staff has informed us that our approval will be delayed until the July 16, 2014 meeting due to internal protocols. We have also received confirmation that we may expend funds immediately, subject to the overall grant cap and the required reimbursement rules. We intend, therefore, to commence our activities this week, as originally planned.

“We are grateful to the SEEC staff for their hard work during this busy election season. We are excited to begin presenting our message to Republican primary voters and ultimately to the people of Connecticut.

McKinney and Walker announced Friday that an initial review of its application for public financing by the State Elections Enforcement Commission had raised questions about just $4,600, leaving them with hopes of still winning approval next week.

A gubernatorial campaign must submit $250,000 in qualifying contributions of no more than $100 each to obtain public financing, and each must be accompanied by paperwork detailing each donor’s name, home address and employer.

The commission has a weekly deadline of Wednesday for accepting applications or revised applications, which are then considered at the next weekly meeting.

In McKinney’s case, the submission of a revised application today placed them on the agenda for approval next week, according to a spokesman for the commission, Joshua Foley.

McKinney and Walker pooled their qualifying contributions and will share a gubernatorial primary grant of $1.35 million. If Walker had qualified separately, he could have received a separate grant of $406,275.

Walker is competing for the nomination for lieutenant governor with the convention-endorsed candidate, Penny Bacchiochi, and Heather Bond Somers. Neither is allied with a candidate for governor, and both already have received public financing grants.